The Karnataka CM with only 37 JD-S MLAs in the assembly is on shaky ground and overly dependent on the Congress for every decision, reports Bibhu Ranjan Mishra. 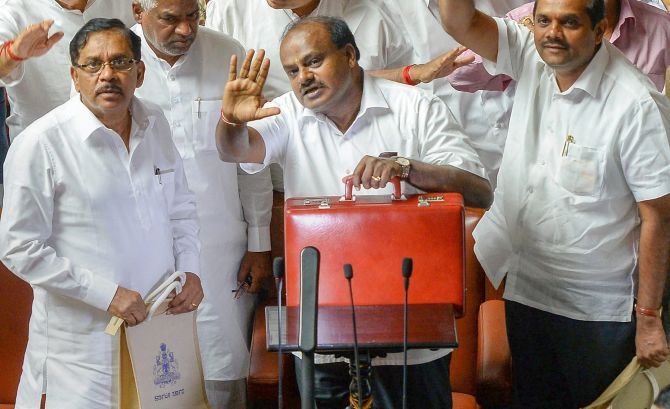 IMAGE: Karnataka Chief Minister HD Kumaraswamy, with his deputy G Parameshwara and other ministers, waves as he leaves after presenting the state budget 2018-19 in the assembly, in Bengaluru. Photograph: Shailendra Bhojak/PTI Photo

The inaugural session of the 15th Karnataka assembly beginning this Monday will be a test for the newly-formed coalition government. The ruling Congress-Janata Dal-Secular coalition is looking much more divided now than what it was a month ago, as against a formidable Opposition.

The differences of opinion surfacing within the Congress, the larger coalition partner, especially the recent remarks by former chief minister Siddaramaiah that the coalition government may not last beyond the 2019 parliamentary election, has not only created a flutter in the political circle, it has also emboldened the Opposition – the Bharatiya Janata Party.

There is deep-rooted dissent within the rank and file of the Congress waiting to erupt. It is not just Siddaramaiah’s statement, but his actions are also worrying the Congress, forcing its state unit chief, G Parameshwara, to give statements in the media, allaying the fear about the longevity of the government.

The Kuruba leader, though out of power now, has become the rallying point of the disgruntled leaders, many of whom were former ministers in the previous Congress government, but were denied berth this time.

According to sources, despite his waning influence in the party, Siddaramaiah commands the support of at least 30 MLAs, including Lingayat strongmen M B Patil and S R Patil, former ministers Ramesh Jarkiholi, H Anjaneya and Ramalinga Reddy and Roshan Baig.

Unlike previous chief ministers, H D Kumaraswamy, with only 37 JD-S MLAs in the assembly, is on shaky ground and overly dependent on the Congress for every decision.

This assembly session will also be the first in the state when a chief minister belonging to the third-largest party will take on the leader of the opposition (B S Yeddyurappa) from the single largest party, commanding the support of 104 MLAs.

The veiled threat from Siddaramaiah is expected to be the biggest worry for the government, which is slated to present its maiden budget on July 5. The trouble also rises manifold as the former CM is against the presentation of a full budget and wants a supplementary budget instead.

Though Siddaramaiah has not been able to garner enough support from within the party, he is yet to give up the stance. Pacifying Siddaramaiah will be critical for a successful conduct of the first assembly session under the present government, especially to ensure the smooth passage of the Finance Bill.

The issue of farm loan waiver poses another serious challenge to Kumaraswamy, who also holds the Finance portfolio.

Although a major poll promise made by the JD-S, the CM is caught up with the harsh economic factors. While its implementation alone is expected to cost the state Rs 530 billion, as part of the proportionate allocation of funds for the welfare of backward classes, Dalits and minorities, the state allocates close to Rs 120 million every year.

The size of the state budget is close to Rs 2 trillion and experts feel the allocation towards only these two could cost a lot to the exchequer, while it may even find it difficult to pay salaries to the government employees.

According to a recent report by State Bank of India, Karnataka is one of the few states over-dependent on market borrowing to finance its fiscal deficit, with the ratio of interest payment to GDP touching 46 per cent in FY19.

Sources say the government is exploring options to make the loan waiver implementable, including certain riders as to what kind of farm loans are eligible to be waived. For example, it may cover only crop loans and not that taken for purchasing of farm equipment.

The state is also contemplating repayments to the banks in a staggered manner, instead of doing it in one go.

The political uncertainty before the new government is expected to linger, at least until the next cabinet expansion. The Congress has kept at least six ministerial positions under its quota vacant as a bait to placate the dissidents.

In a relief for the Kumaraswamy government, Karnataka so far has received good rainfall this monsoon. Most reservoirs in the state are understood be running to full capacity. The state has also gone for brisk sowing this season. At least, water, which is one of the major causes of unrest in the state, will keep the government cool for some time. 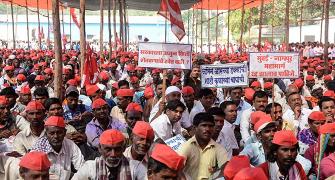 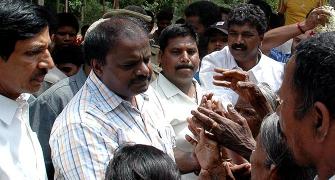 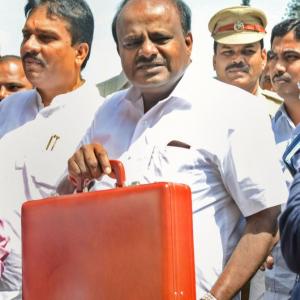