News
Business
Movies
Sports
Cricket
Get Ahead
Money Tips
Shopping
Sign in  |  Create a Rediffmail account
Rediff.com  » News » EXPLAINED: The what, why and when of Brexit

EXPLAINED: The what, why and when of Brexit

Brexit, Leave, Remain… What’s all this about?

In the past few days, the British media has gone into overdrive talking about Brexit, leaving many of us scratching our heads.

However, don’t fret. We, at Rediff.com, present to you a dummy’s guide to the historic vote that could shape British-European Union ties for generations and have wide ranging effects around the globe. 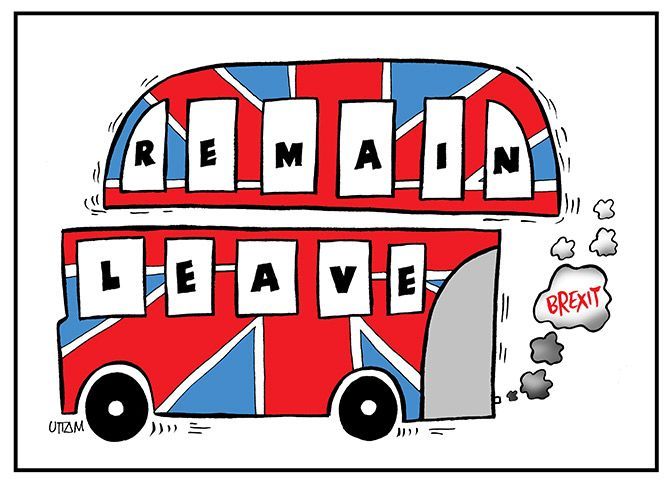 Brexit is the nickname given for the referendum which will be held on June 23, Thursday, to decide whether Britain should leave or remain in the European Union. ‘Brexit’ was coined by The Economist magazine in 2012. The expression is also a twist on ‘Grexit,’ which was used to describe Greece’s potential withdrawal from the Eurozone

2. How will the Brexit poll take place and who is allowed to vote?

British, Irish and Commonwealth citizens over the age of 18 who are residents in the United kingdom, along with UK nationals living abroad who have been on the electoral register in the UK in the past 15 years will come out and vote in a system similar to the other elections.

3. When will vote counting begin and when will the result be announced?

Polling stations will have no more than 2,500 electors on their lists. Once cast, the white-coloured ballot papers will be taken to local counts once the polls close at 10 pm (local time). The final nationwide result will be announced in Manchester Town Hall as soon as results come in. 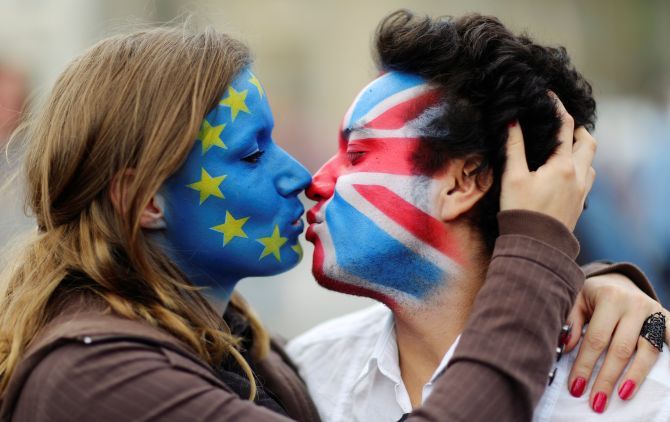 IMAGE: Two activists with the EU flag and Union Jack painted on their faces kiss each other in front of Brandenburg Gate to protest against the British exit from the European Union. Photograph: Hannibal Hanschke/Reuters

The European Union -- often known as the EU -- is an economic and political partnership involving 28 European countries. It began after World War II to foster economic co-operation, with the idea that countries which trade together are more likely to avoid going to war with each other. The United Kingdom joined the ‘Common Market’ 40 years ago in 1973.

5. So, what’s the problem? Why does UK suddenly want to leave the UK?

British Prime Minister David Cameron promised to hold a referendum on the issue as part of his 2015 re-election campaign. Many within Britain believe that the money the UK gives the EU -- $16.3 billion in 2014 -- is too much.

Additionally, many believe Britain is being held back by the EU, which they say imposes too many rules on business and charges billions a year in membership fees for little in return. They also want Britain to take back full control of its borders and reduce the number of people coming here to live and/or work.

Another reason why many in Britain want to leave the EU is the recent migrant issue.

EU citizens can live and work in any EU country, and 13 per cent of today’s UK population comes from other countries.

Some Britons feel higher immigration puts a strain on healthcare and education, keeps wages low and puts local workers out of a job.

The way the Syrian migrant crisis is playing out in other parts of Europe is another reason why Britain wants to opt out of the EU. They think that Brexit will let the UK decide on its own -- without having to conform to the rules of the EU -- how to control its borders. 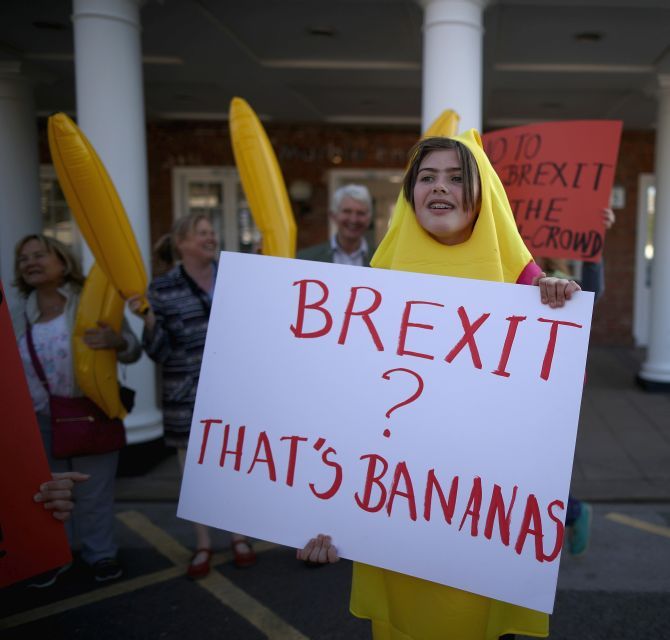 IMAGE: An anti-Brexit supporter dressed as bananas protest outside York racecourse. Boris Johnson and the Vote Leave campaign are touring the UK in their Brexit Battle Bus. The campaign is hoping to persuade voters to back leaving the European Union in the referendum. Photograph: Christopher Furlong/Getty Images

6. Who wants to stay and who wants out of the EU?

Cameron wants Britain to stay in the EU. Sixteen members of his cabinet also back staying in. Parties such as the Labour Party, Scottish National Party, Plaid Cymru and the Lib Dems are also supporting the ‘Remain’ campaign. Countries like France and Germany have also stated their support for the ‘remain’ campaign.

However, Michael Gove, the secretary of state for justice, and former mayor of London Boris Johnson, along with nearly half of the Conservative MPs are backing the ‘Leave’ campaign.

Far-right, anti-immigration party UK Independence Party and its populist leader Nigel Farage are backing Brexit, along with other far-right groups in the UK, such as Britain First.

The British media is divided on the issue, just like the British public.

7. What will happen if the Brits do pull out?

It depends. There is a consensus that leaving would hurt Britain financially, at least in the short term. According to a study by Britain’s National Institute of Economic and Social Research, losing the influx of migrants workers, which has created anxiety, result in lower productivity, slower economic growth and decreased job opportunities.

Not to mention the loss of trade and investment. Leaving the EU would also hurt other economies. Additionally, if Britain leaves the union, that could give momentum to the nationalistic, anti-migrant message.

Another wrinkle: Scots want to stay. If the UK leaves, Scotland says it’ll call for a referendum for its own independence -- so it can join the EU. 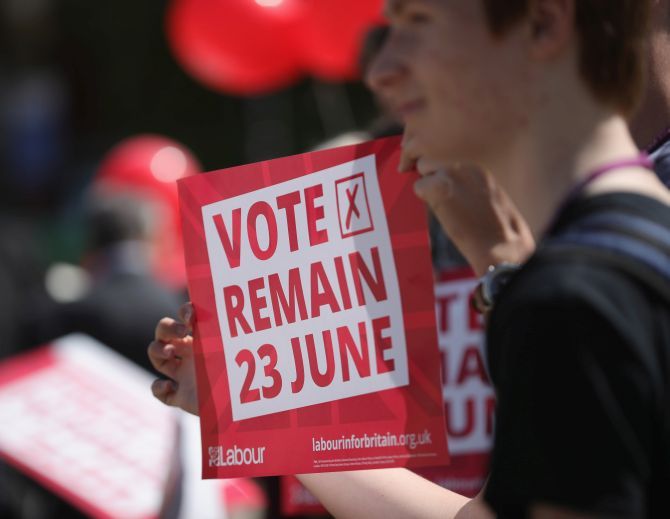 8. What options does UK have after it leaves EU?

If the ‘Leave’ campaign wins the referendum on Thursday, analysts expect that Cameron could face calls to resign immediately or at least set a timetable for his departure.

On the economy front, the expectation is that there would be a plunge in the value of the pound and share prices in the immediate aftermath of a Brexit, causing the Bank of England to raise interest rates.

Two new polls suggest that support has swung back toward remaining in the European Union. A poll conducted June 17 and 18 by said 45 per cent of the respondents wanted to stay in the EU, and 42 per cent wanted to leave.

Bookies are also betting on this crucial issue (extenal link) with the 'Remain' campaign being odds on favourites to win.

10. Has a country ever left the EU before?

No. The UK would be the first. Greece has thought seriously about it though. 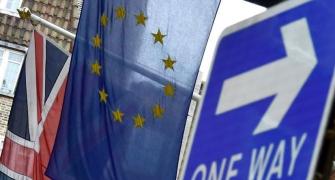 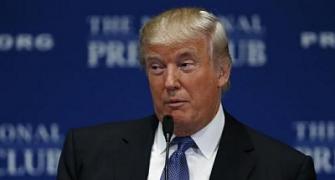 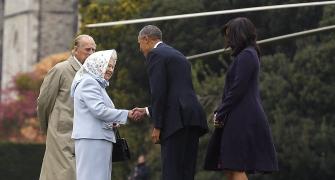 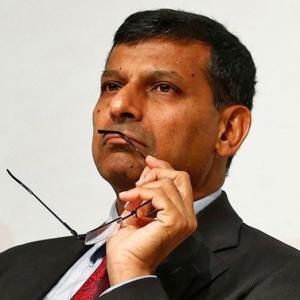