Former Maharashtra minister and the Nationalist Congress Party's Navi Mumbai strongman Ganesh Naik joined the Bharatiya Janata Party along with around 50 party corporators on Wednesday, adding to the growing list of opposition figures who have switched over to the ruling party ahead of the assembly polls. 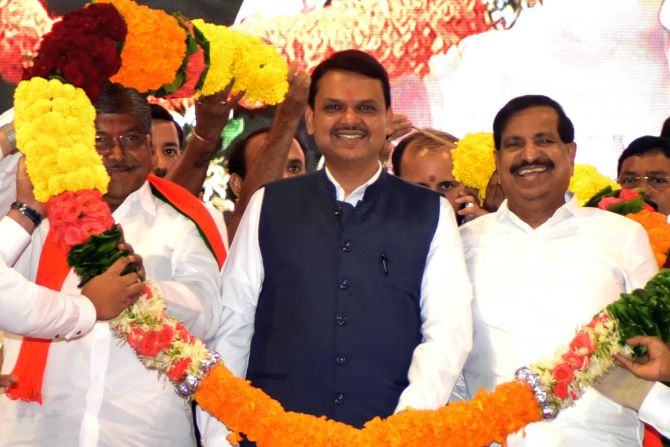 The latest setback for the 20-year-old party came at a time when its top leadership is in talks with the Congress to finalise seat-sharing for the 288-member assembly.

Naik, his son -- former MP Sanjeev -- and the 50-odd corporators of the Navi Municipal Corporation formally joined the BJP in the presence of Chief Minister Devendra Fadnavis and the party's Maharashtra unit chief Chandrakant Patil at Vashi in adjoining Navi Mumbai.

The 68-year-old veteran leader's entry into the BJP now paves the way for the ruling party to control the NMMC.

Speaking on the occasion, Naik praised Prime Minister Narendra Modi for his leadership.

"Modi ji has increased India's reputation in the world," he said.

Naik said it was his grudge he "couldn't do justice to the people who loved him during the 15 years" of his stint as a minister in the NCP-Congress government (1999-2014).

"I don't berate the chief ministers of the past. But I am confident about the (good) work Devendra ji has done and will do in future," Naik said, praising the BJP's first CM of the state.

Speaking on the occasion, Fadnavis said leaders from different parties were joining the BJP not for power or posts, but after seeing that the country is marching ahead under the leadership of Prime Minister Modi.

Good leaders in other parties saw this over the past five years. Hence, people-oriented leaders are joining the BJP, Fadnavis said.

Referring to mega recruitment term being used for slew of opposition leaders joining the BJP, Fadnavis, without naming the Congress or NCP, asked them to introspect as to why there is a mega leakage in their fold.

The chief minister claimed earlier not much was coming to Navi Mumbai and its adjoining areas in terms of investment unlike what is happening under his watch since 2014.

Fadnavis said some journalists told him that they were not "enjoying" the reportage of the forthcoming Maharashtra assembly polls as they are aware who is going to win
(apparently referring to the BJP-led alliance).

"They (journalists) are saying they are just waiting to see how much seats we are going to win. This is because the love of the people we are getting," said Fadnavis, who will complete his five-year term next month-end.

The BJP chief minister assured the issues pertaining to Navi Mumbai's development will be resolved.

Naik, who cut his teeth into politics with a stint in the Shiv Sena, joined the NCP in 1999 -- the year the party was established -- following differences with late Bal Thackeray, the saffron party's founder.

A leader representing the Agri community, Naik contested the 2014 assembly polls from Belapur, but lost to BJP's Manda Mhatre.

Naik's younger son Sandip joined the BJP on July 31, leading to speculation about him also deserting the Sharad Pawar-led party.

Along with Sandip, NCP's two other legislators Shivendrasinh Bhosale and Vaibhav Pichad joined the BJP that day.

Earlier, the NCP had lost its Mumbai unit chief Sachin Ahir and MLAs Jaydutta Kshirsagar and Pandurang Barora to the Shiv Sena. 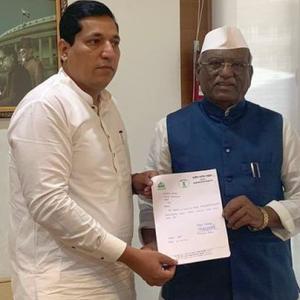