US, UK, other countries issue advisory for NE states

Several countries, including the United States, United Kingdom, Israel  Canada and Singapore, have asked their citizens to exercise caution while travelling to the Northeast India which has witnessed violent protests against the amended citizenship act. 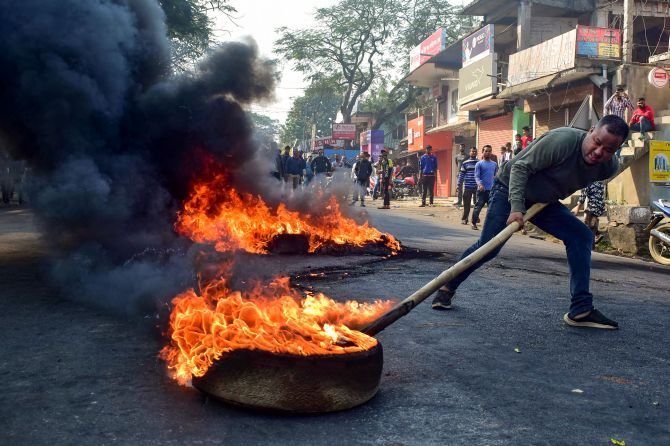 IMAGE: A demonstrator burns tyres on National Highway 17 during a protest rally against Citizenship Act, at Boko in Kamrup district of Assam, on Friday. Photograph: PTI Photo

The new amended citizenship law, which provides for granting citizenship to non-Muslim persecuted minorities from Bangladesh, Pakistan and Afghanistan, has put the Northeast on the boil, where people fear that it may exacerbate the problem of illegal immigration.

The US government has temporarily suspended official travels to Assam, the epicentre of the protests.

"US citizens in the northeastern states of India should exercise caution in light of media reports of protests and violence in response to the approval of the Citizenship (Amendment) Bill. Government curfews are in place in some areas. Internet and mobile communications may be disrupted. Transport may be affected in various parts," the advisory read.

The US Embassy in New Delhi has also listed out precautions for its citizens staying in the northeastern states, asking them to avoid areas with "demonstrations and civil disturbances", being aware of their surroundings, and keep a "low profile" among others.

The UK government updated its travel advisory for India to warn its citizens against travel to the states in the Northeast.

In the regular travel advice section constantly updated by Foreign and Commonwealth Office for all countries, British nationals have been advised to exercise caution while undertaking all but essential travel to the region.

"The FCO advise against all but essential travel to the state of Manipur, except the state capital Imphal and the Meiti Valley areas, which include Loktak Lake, Keibul Lamjao National Park and the Imphal War Cemetery,” reads the updated advisory.

The UK online advisory continues to advise against all travel to Jammu and Kashmir, including tourist destinations of Pahalgam, Gulmarg and Sonamarg, Srinagar and the Jammu-Srinagar national highway.

"Travel conditions are difficult due to street protests and cancellation of some flight and train services. Mobile data have also been restricted in some areas," Singapore's Channel News Asia quoted MFA as advising.

"Due to the evolving situation, the travellers should also keep themselves updated on the latest developments through the local news and to take all necessary precautions to ensure their personal safety, including avoiding areas with crowds," said the ministry.

Canada has advised its citizens to avoid "non-essential" travel to Arunachal Pradesh, Assam, Manipur, Meghalaya, Mizoram and Nagaland due to the protests.

Israel has warned its citizens to "completely avoid" going to Assam because of violent protests.

The Israeli foreign ministry also warned against going to other states in the area due to the possibility of the violent protests spreading around.

Israeli citizens currently in Assam have been advised to act according to instructions by officials.

The ministry of external affairs in New Delhi has said the new law provides expedited consideration for Indian citizenship to persecuted religious minorities already in India from certain contiguous countries. It asserted that every nation has the right to enumerate and validate its citizenry, and to exercise the prerogative through various policies.