In an effort to allay fears, the Union home ministry on Tuesday said non-inclusion of a person's name in the final list of National Register of Citizens does not by itself amount to him or her being declared a foreigner and assured that adequate arrangements have been made for appeal against it. 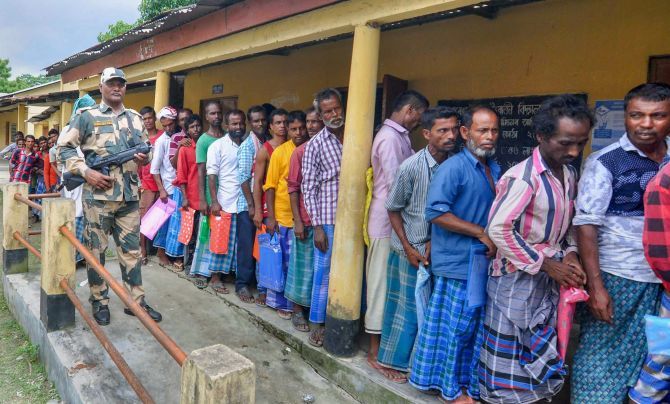 The ministry also said it will amend the rules to increase the time limit of filing of appeals in foreigners tribunals from 60 to 120 days for those who would be excluded from the final National Register of Citizens, a list of Assam's residents to be published on August 31.

The decisions were taken at a high-level meeting chaired by Union home minister Amit Shah and attended by Assam chief minister Sarbananda Sonowal and others in New Delhi on Monday.

In a statement, the ministry said under the provisions of Foreigners Act 1946 and Foreigners (Tribunals) Order 1964, only foreigners tribunals are empowered to declare a person foreigner.

"Thus, non-inclusion of a person's name in NRC does not by itself amount to him/her being declared as a foreigner," it said.

In order to facilitate the persons excluded from NRC, adequate number of such tribunals is being established at convenient locations.

"It has been decided that state government would also make arrangements to provide legal aid to the needy people amongst those excluded from NRC. As it may not be possible for all those excluded from final NRC to file the appeal within the prescribed time, the MHA will amend the rules to increase the present time limit of filing of appeals in FTs from 60 days to 120 days regarding exclusion from final NRC," the statement said.

At the meeting, it was also decided that adequate arrangements will be made by the state government to provide full opportunity to people excluded from the NRC list to appeal.

"Every individual, whose name does not figure in the final NRC, can represent his/her case in front of the appellate authority i.e. foreigner tribunals," it said.

The Citizenship (Registration of Citizens and Issue of National Identity Cards) Rules, 2003 are also being amended accordingly.

To maintain law and order, the ministry said, central security forces are being provided to the state.

The Union home ministry and the Assam government have held extensive deliberations in recent weeks, the statement said.

When the draft NRC was published on July 30, 2018, there was a huge controversy over the exclusion of 40.7 lakh people from it. The draft NRC included the names of 2.9 crore people out of the total 3.29 crore applications.

In the list published in June 2019, over a lakh more people were excluded.

The final list of the NRC will be published on August 31.

The Supreme Court-monitored NRC exercise, aimed at identifying illegal immigrants in the state that borders Bangladesh, was carried out only in Assam, which faced influx of people from Bangladesh since the early 20th century.

When the NRC was first prepared in Assam in 1951, the state had 80 lakh citizens.

According to the 2011 census, Assam's total population is over 3.11 crore.

The process of identification of illegal immigrants in the state has been widely debated and become a contentious issue in the state politics.

A six-year agitation demanding identification and deportation of illegal immigrants was launched by the All Assam Students Union in 1979. It culminated with the signing of the Assam Accord on August 15, 1985, in the presence of then prime minister Rajiv Gandhi.

On Monday, Assam chief minister Sarbananda Sonowal indicated that the government may explore legislative options to deal with the wrongful inclusion or exclusion of some names in the NRC after its final publication.

Last month, the Supreme Court rejected the Central and Assam governments' plea for sample re-verification to find out wrongful inclusions or exclusion of names.

The process of documenting and identifying illegal immigrants in Assam is India's "internal matter", external affairs minister S Jaishankar said in Dhaka on Tuesday, days after New Delhi voiced its concerns over the illegal immigration from Bangladesh to the Northeast.

Jaishankar's remarks came after he held talks with his Bangladeshi counterpart A K Abdul Momen here on issues like the long-pending pact on the Teesta water sharing and the Rohingya crisis.

Jaishankar is in Dhaka on a two-day visit, his first to Bangladesh after taking over the charge of external affairs minister.

Jaishankar said that he had a fruitful interaction with his Bangladeshi counterpart.

Jaishankar in a joint press conference with Momen said that the National Register of Citizensin Assam is India's "internal matter" amid concerns in Bangladesh, Bdnews reported.

Home Minister Amit Shah early this month raised with Bangladesh India's concerns over the illegal immigration from Bangladesh to the Northeast.

When the draft NRC was published last year, 40 lakh names were excluded, leading to a huge political controversy.

Assam and other Northeastern states have been facing the problem of influx from neighbouring Bangladesh through the porus border.

Jaishankar also said India's position and commitment to the pending Teesta water deal remained as it was, Bdnews quoted Jaishankar as saying.

The Teesta deal was set to be signed during the then Prime Minister Manmohan Singh's visit to Bangladesh in September 2011, but was postponed at the last minute due to objections raised by West Bengal chief minister Mamata Banerjee.

Teesta water is crucial for Bangladesh, especially in the leanest period from December to March, when the water flow often temporarily comes down to less than 1,000 cusecs from 5,000 cusecs.

On water sharing, he said water resource is an “important subject” for Bangladesh and "we look forward to making progress to find a mutually acceptable formula from 54 shared rivers. We are ready to make a start wherever possible."

"We have a position you are aware of that. We have a commitment on that position and that does not change," he said when asked to comment specifically on the Teesta, indicating New Delhi's previous position that it is ready to sign the deal once the West Bengal government agrees to it.

They also discussed the Rohingya issue and agreed on their “safe, speedy and sustainable return” to Myanmar.

Bangladesh, which is facing a big influx of Rohingya Muslims from Myanmar, is seeking enhanced India's support in handling the crisis by mounting pressure on Myanmar to take back the refugees who have taken shelter in the country.

According to the United Nations, over 745,000 Rohingya Muslims have fled Myanmar's Rakhine state into Bangladesh following serious human rights abuses.

However, Myanmar denies the allegations.

Jaishankar said connectivity between the countries has been increased on all routes and "we would like to step up this partnership".

On energy cooperation, he said both countries have stakes in each other's success.

On trade, he said, the progress would be made at a pace which is comfortable for Bangladesh.

Jaishankar said India operates the largest consular service in Dhaka and “we want to make it seamless”.

"Our partnership with Bangladesh remains an example what neighbours can do together,” he said, adding that Prime Minister Narendra Modi is determined to ensure partnership remains a "role model" in South Asia.

Momen said he was "excited" as he had a "very good meeting" with Jaishankar.

"We more or less came to a consensus on all issues," he said, without naming the issues on the agenda. 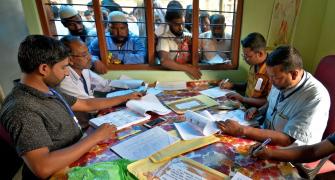 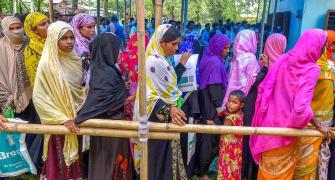