The publishing of the NRC will not rid India of illegal immigrants who are already here.
But even if it manages to withhold their political and voting rights, it will be a significant achievement, observes Anand Kumar. 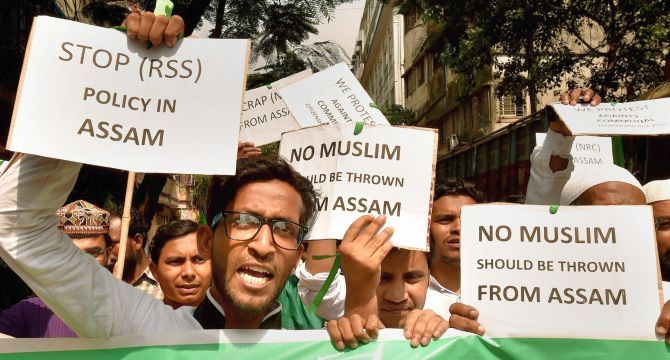 The publishing of the second draft of the National Register of Citizens has generated reactions on expected lines.

While the ruling Bharatiya Janata Party-led coalition is appreciative, the Congress party initially denounced the NRC as an attempt to target Muslims.

But it was not the first time this has happened. The issue of illegal migration from Bangladesh to India has always been a political football. That is why until now no serious attempt was made to address this problem.

However, things were bound to take a different turn with a BJP-led government with a comfortable majority at the Centre.

The NRC is seen as an important step in addressing the problem of illegal immigration, but to what extent it would be successful remains an important question.

The Congress also seems divided as fearing a backlash in Assam it has subsequently claimed that it supports the NRC which according to the party is its own baby.

In the ruling coalition there are parties like Shiv Sena which have a hardline position on the issue. On the other hand there is the Asom Gana Parishad which has a very different understanding of the problem.

The AGP's stand is different from even that of the BJP which considers that Hindus who have come from neighbouring countries were persecuted there on religious grounds. The BJP considers them as refugees On this basis and wants to give them citizenship by amending the Citizenship Act, 1955.

The AGP, which has all along been a regional party, thinks that such an amendment would give citizenship to Bangladeshi Hindus and claims that this would make Assamese a minority in the state, which is not true. It also opposes the legislation saying that it would grant citizenship on the basis of religion.

Possibly, the AGP leaders think that a significant Bangladeshi Hindu population could prove to be a hurdle in future for their regional political ambitions.

The history of India's Partition in 1947 and the subsequent India-Pakistan War in 1971 clearly show that Hindus were persecuted in neighbouring Bangladesh and many of them had to cross over to India because they were victims of violence there.

In Operation Searchlight carried out by the Pakistan army in 1971, Hindus were the main target, leading to their exodus.

There were 10 million Bangladeshi refugees in various camps in 1971, out of which 7 million were Hindus. This clearly shows that the Pakistani army operation was mainly against the Hindus.

In Bangladesh, even after its liberation, Hindus face violence at regular intervals.

The Vested Property Act in Bangladesh says that if a Hindu goes to India, then a Bangladeshi Muslim can legitimately take over his property.

This Act often incites violence against Hindus to drive them away from the country so that their properties could be taken over.

Given this situation, it is difficult to treat both Hindu and Muslim migrants with the same yardstick.

Talibanisation taking place in Pakistan and Afghanistan is no secret, which has resulted in further persecution of Hindus and Sikhs in these countries. It has forced a number of them to move to India. Their cases also need to be considered sympathetically.

Perhaps the AGP does not have problem with these migrants as they have settled in other parts of India and not in Assam.

Due to the complexity of the problem of illegal migration the people in power in the past conveniently ignored it. But with the change in the political dispensation this issue came on the political agenda and work on the NRC was expedited.

However, it is unlikely that the NRC will lead to expulsion of illegal migrants from India.

If any attempt is made to forcibly expel 4 million identified illegal immigrants from Assam to Bangladesh, it would lead to a chaotic situation.

The BJP government in its earlier stint could not expel a few hundred identified illegal migrants from West Bengal. It only led to bad blood between the Indian and Bangladeshi border guarding forces.

Thankfully, at present, the relationship between the two border forces is good and they are cooperating with each other on a number of issues. Any ill-advised action would destroy this relationship which has been built with great effort without any significant gain.

This is not to suggest that no action should be taken against the illegal migrants, and the NRC will still prove useful in many ways.

First of all, it will lead to the identification of illegal migrants.

This is no mean achievement even if the migrants are not deported. This will help the Indian government to partially estimate the number of Bangladeshi illegal immigrants.

Actually, the illegal migrants from Bangladesh after its liberation in 1971 were sent in a very planned and coordinated manner.

Thus, one can find colonies of illegal Bangladeshi immigrants in Delhi, Jaipur and many other places in India. This will make their identification in other parts of India quite difficult.

Secondly, the identified illegal migrants will be barred from voting in elections.

This is also an important achievement as these people will no longer be able to swing elections in favour of political parties who promise to legitimise their status.

Obviously, this is going to be politically controversial, as some Opposition parties have benefitted from them in the past.

Last but not the least, with this action the Indian government would be sending a message to all future illegal migrants that they are not welcome.

In the past, favourable regimes in the areas bordering Bangladesh encouraged illegal migration in the hope of reaping an electoral harvest. This often created a very difficult situation for India's Border Security Force.

On the one hand they were supposed to stop illegals from coming into India while on the other politicians in border areas used to put pressure on them not to do so.

The long delay in handling the problem of illegal migration has ensured that its permanent solution will not come anytime soon.

The publishing of the NRC will not rid India of illegal immigrants who are already here. But even if it manages to withhold their political and voting rights, it will be a significant achievement.

It will also deter to a great extent future illegal migrants who earlier used to just pour into India thinking that their political patrons would embrace them even at the cost of Indian security. 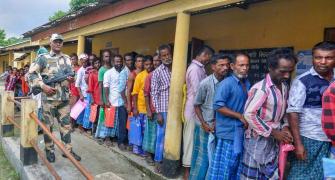