At a time when  Rajiv Gandhi bashing -- from 1984 anti-Sikh riots to escape of Warren Anderson, CEO of Union Carbide, responsible for the catastrophic Bhopal gas tragedy, to Shah Bano turnaround, Bofors kickbacks and messy Sri Lankan  policy -- is the flavour of the season for the Bharatiya Janata Party-National Democratic Alliance, a new book has sought to question those who had reportedly advised Rajiv  to go in for the Indian Peace Keeping Force misadventure in Sri Lanka.

In Nehru Saga -- A civil servant speaks (BlueRose Publishers 2019), Bhatnagar wonders if then prime minister Rajiv Gandhi was being judiciously advised by the Indian high commission in Colombo.

Without naming Puri,  who was deputy high commissioner at Colombo then, Bhatnagar writes, 'One question that ought to be have been addressed in due time pertains to whether Rajiv Gandhi was adequately and judiciously advised, not only by the military commanders and the intelligence agencies, but more importantly , by the then Indian high commission in Colombo and senior diplomats in the mission'.

Bhatnagar expresses surprise why the then high commissioner (the late J N Dixit) was subsequently promoted as foreign secretary and National Security Advisor under the UPA 1 of Dr Manmohan Singh whose political reins were in the hands of Rajiv’s widow, Sonia Gandhi.

Bhatnagar goes on to write more on Puri: 'The high commission’s deputy [Puri] prospered in his foreign service career under the UPA, which , in no way obstructed his induction as a Union minister in the NDA in 2017'.

The 1966 batch IAS officer selectively quotes from Puri’s book Delusional Politics to illustrate how his fellow bureaucrat had not spared Dr Manmohan Singh who, Bhatnagar thinks, had served as Puri’s mentor.

'In a recent book, Delusional Politics, a former prime minister has not been spared. ‘Manmohan Singh, unlike his natural persona, went way out of the way for the nuclear deal. I do not think a single dollar of commercial contracting has been done under it', Bhatnagar has quoted Puri as saying and then goes on to observe his value judgment, tongue firmly in cheek, 'This is the virtue of changing loyalties at the best; also, a stinging insult to the wisdom and intelligence of the average Indian voter.'

Post-retirement, Bhatnagar worked with the National Advisory Council between 2004 and 2008 when Sonia Gandhi was the chairperson of the NAC. Thereafter, he was chairman, Prasar Bharati (2008-09).

To illustrate further, the author relies on Prof David Jonathan Gross, winner of the 2004 Nobel Prize for Physics who had told a gathering in Calcutta in 2017 that Indian bureaucracy was holding back the country’s strides in the field of science and technology.

'Most educational and scientific institutes [in India] are still governed by civil servants. Everything is so centralised and inflexible. Also, there is political influence over science. Bureaucracy in India has not changed all these years. Otherwise, the country can easily surpass China in the field of science in a decade or so. Unlike in China, India has a culture of science education'. 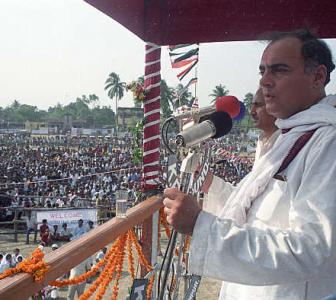 Sai's Take: Rajiv attack: Modi desperate?
Totally unprepared and ill-equipped, that was the IPKF
The intelligence agencies said, Don't worry about the LTTE