High drama was witnessed at the residence of Republic TV editor-in-chief Arnab Goswami in Mumbai on Wednesday morning when a police team arrived to arrest him in an abetment of suicide case with the entire episode, interspersed with arguments and pleadings, recorded on camera. 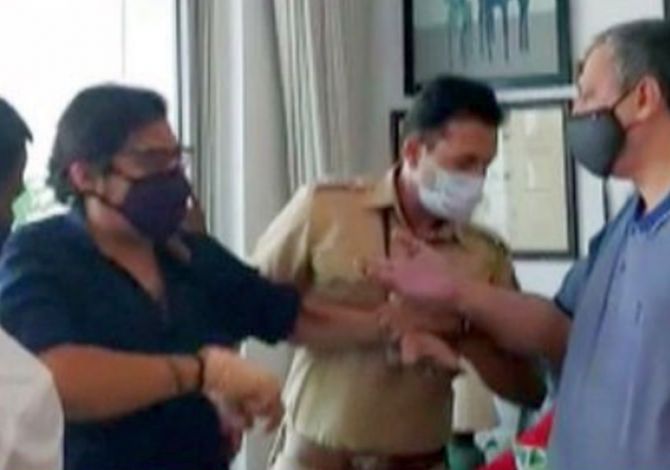 "Arnabji chaliye," said a police officer, requesting the 47-year-old journalist to come along with them to Alibaug, a coastal town in Raigad district adjoining Mumbai where the case against him has been registered.

The case relates to suicide by a 53-year-old interior designer in 2018, a police official said.

After sometime, as Goswami kept arguing and firing a volley of questions, police officials caught him and took him out of his Lower Parel residence in Central Mumbai and put him in a waiting van.

The police officers "Arnabji" address reminded people of Goswami's jibe at the Maharashtra chief minister as Uddhav Thackerayji on his TV shows.

Mumbai police personnel were present to assist their Raigad counterparts in completing the entire process of detention and arrest.

A video showed police officers pulling Goswami out of the door of his flat and requesting him to come out.

A few moments later, Goswami was seen coming inside his flat and sitting on the sofa in the hall.

Family members of Goswami started recording the incident on their mobile phones and one of them was heard saying everything is live now.

As a verbal altercation between police officers and Goswami ensued, one of the cops was heard telling him, better you come with us... you have to cooperate with the police."

As Goswami showed reluctance, an officer introduced himself as "DySP Pravin Patil of the Raigad Police".

Patil told Goswami he has come to his place in legal capacity to arrest him in case no 59/2018 registered at the Alibaug police station under IPC sections 306 (abetment of suicide) and 34 (acts done by persons in furtherance of common intention).

Patil also informed Goswami's family members present in the flat that he is being taken to Alibaug, around 100km from Mumbai.

Goswami was seen alleging that he was "physically assaulted" by the police and he will not accept physical assault.

"I am the editor-in-chief of Republic TV, you are physically assaulting me, is this right?" Goswami is heard asking the police in the video.

The police officials, who were present in the flat, countered Goswami and said nobody assaulted him.

Goswami is seen shouting at the police and saying," Dont touch my son, you assaulted me, you can not assault my family. My hand is injured and I suppose to go to the hospital."

A female police officer wanted signature of Goswami's wife on a paper.

However, the well-known TV journalist immediately intervened and asked his wife not to sign on any paper and told the police to maintain physical distance.

Assistant Police Inspector Sachin Vaze, an "encounter specialist" with the Mumbai Police, was also at Goswami's residence to assist the Raigad cops.

Goswami alleged assault by Vaze and said he has illegally entered in his flat.

As the police repeatedly asked Goswami to come along them, he was heard telling them, I want medical advise before leaving. I want to make some arrangements and I want to talk to my family."

As an officer told him that he is in police custody, Goswami sought to know what charges have been levelled against him.

The officer was seen telling him, Once again I will tell you, you are arrested by the Raigad police under sections 306, 34 of the IPC.

The officer told Goswami he has full legal right to defend himself, but for now he has to come with them. At this juncture, Goswami was seen alleging highhandedness by the police and told his wife to call the doctor.

After several rounds of arguments, the police team decided to pick him up and asked him to accompany them.

An officer told him, Arnabji chaliye after which he was caught by police officials and pushed towards the door of the flat.

At this point, Goswami in loud voice told his wife to record the entire episode.

The case against Goswami relates to suicide by 53- year-old interior designer Anvay Naik in 2018.

The architect and his mother committed suicide over alleged non-payment of dues by Republic TV, police said. 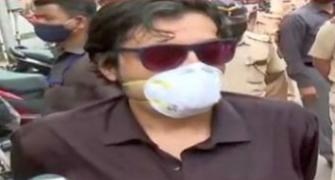 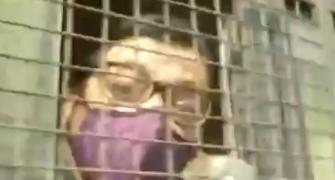 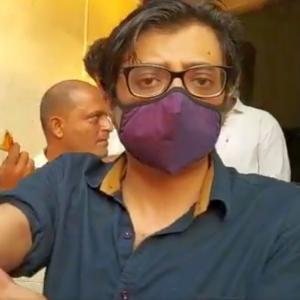