The Editors Guild of India has strongly condemned the unprecedented decision of an inter-ministerial panel to take a leading Hindi channel off air for a day and termed it a “direct violation” of the freedom of the press.

The editor’s body demanded that the order be “immediately rescinded”.

The inter-ministerial panel constituted by the information and broadcasting ministry had concluded that the channel ‘NDTV India’ had revealed crucial and “strategically sensitive” information when the terror attack on the Pathankot Indian Air Force base was being carried out in January, according to official sources.

The ministry while invoking the powers under the Cable TV Networks (Regulation) Act said it “orders to prohibit the transmission or re-transmission of NDTV India channel for one day on any platform throughout India with effect from 00:01 hrs on 9th November,2016 till 00:01 hrs of 10th November, 2016”.

“The Editors Guild of India strongly condemns the unprecedented decision of the inter-ministerial committee of the Union Ministry of Information and Broadcasting to take NDTV India off the air for a day and demands that the order be immediately rescinded,” the guild said in a statement. 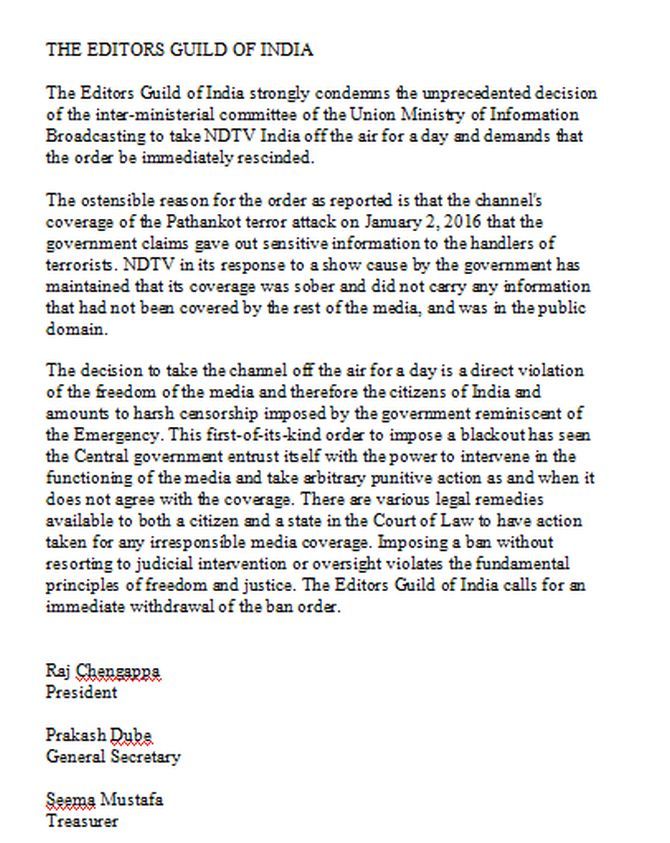 NDTV in its response to a show cause by the government has maintained that its coverage was “sober” and did not carry any information that had not been covered by the rest of the media, and was in the public domain, it said.

NDTV responded, “The order of the MIB has been received. It is shocking that NDTV has been singled out in this manner. Every channel and newspaper had similar coverage. In fact NDTV’s coverage was particularly balanced. After the dark days of the emergency when the press was fettered, it is extraordinary that NDTV is being proceeded against in this manner.”

“The decision to take the channel off the air for a day is a direct violation of the freedom of the media and therefore the citizens of India and amounts to harsh censorship imposed by the government reminiscent of the Emergency.

“This first-of-its-kind order to impose a blackout has seen the central government entrust itself with the power to intervene in the functioning of the media and take arbitrary punitive action as and when it does not agree with the coverage,” the statement said.

This is the first-ever such order against a TV channel over its coverage of a terror attack, the norms regarding which were notified last year.

“There are various legal remedies available to both a citizen and a state in the court of law to have action taken for any irresponsible media coverage.

“Imposing a ban without resorting to judicial intervention or oversight violates the fundamental principles of freedom and justice. The Editors Guild of India calls for an immediate withdrawal of the ban order,” it added.

Source: PTI© Copyright 2020 PTI. All rights reserved. Republication or redistribution of PTI content, including by framing or similar means, is expressly prohibited without the prior written consent.
Related News: NDTV India, The Editors Guild of India, MIB, Pathankot, Delhi
SHARE THIS STORY
Print this article

India ranks 133 on Press Freedom Index, worse than Afghanistan
How the govt squeezes the press 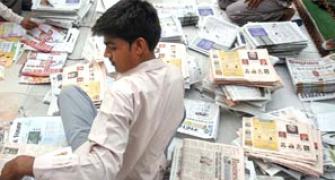