The Enforcement Directorate on Tuesday filed a charge sheet before Delhi court against Pakistan-based Hizb-ul-Mujahideen chief Syed Salahuddin and 11 others for allegedly laundering money for financing terror activities in Jammu and Kashmir. The agency said the charge sheet is also related to blasts carried out by the terror group in Jammu and Kashmir in 2011 in alleged connivance with the Pakistani government and its spying arm Inter-Services Intelligence.

The prosecution complaint, ED's equivalent to charge sheet, has urged the court for confiscating attached assets totalling to Rs 1.22 crores in the case, besides other punishment under Prevention of Money Laundering Act (PMLA).

The case is likely to be taken up by the court soon.

The central probe agency had filed a criminal case of money laundering after taking cognisance of a National Investigating Agency (NIA) charge sheet filed against Salahuddin, Mohammad Shafi Shah and others under the Unlawful Activities (Prevention) Act (UAPA) and other sections of the Indian Penal Code.

The agency said it took over probe in the case after taking congnisance of a 2011 first information report of the NIA in which Mohammad Shafi Shah and his associates were alleged to be involved in execution of sensational blasts in Jammu and Kashmir and huge quantity of arms, ammunition and explosives were recovered from them.

The ED said its money laundering investigation found 'that Hizbul Mujahideen-- the most active terror outfit in Kashmir, has been responsible for funding terrorist and secessionist activities in Jammu and Kashmir headed by Syed Salahuddin-- its self-styled commander based out of Rawalpindi in Pakistan'.

"The funding of terrorism activities on Indian soil had been organised by a trust called JKART (Jammu & Kashmir Affectees Relief Trust) which was operating in connivance with the government of Islamic Republic of Pakistan and the ISI," the ED said.

"It is also revealed, the ED said, that the terror funds were sent to India through the hawala channel, barter traders and human carriers."

"The funds were further distributed through hawala, human carriers and banking channels to the next of kin of active as well as dead Hizbul Mujahideen terrorists," the agency said.

The 'master minds' behind the distribution of these funds, allegedly used for financing of terrorist activities in the Kashmir valley, were Mohammad Shafi and Talib Lali, residents of Bandipora in J-K, Muzaffar Ahmed Dar of Budgam and Mushtaq Ahmed Lone of Anantnag.

The agency said it has earlier attached 13 properties, worth Rs 1.22 crore, 'belonging' to seven terrorists as part of this investigation. 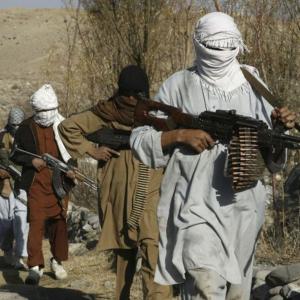