News
Business
Movies
Sports
Cricket
Get Ahead
Money Tips
Shopping
Sign in  |  Create a Rediffmail account
Rediff.com  » News » EC may freeze SP symbol if no decision made before Jan 17 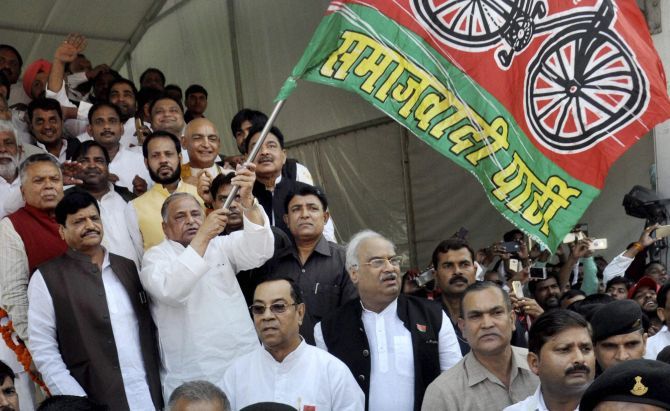 Cycle, the symbol of Samajwadi Party, faces the threat of being frozen before the Uttar Pradesh assembly polls if the Election Commission is not able to decide which of the two factions of the party commands majority in the organisation.

After the split in the party last week, the factions led by Mulayam Singh Yadav and his son Akhilesh had approached the Commission staking claim over the party and the symbol.

Both the sides had also submitted some documents to further their claim and the Commission has given them time till Monday to provide signed affidavits of legislators and office bearers to claim control over the party’s name and symbol.

The side which has the support of majority (50 per cent plus 1) members of Parliament, legislative assembly and council and delegates will gain an upper hand in the fight to control the party founded 25 years ago.

The Commission, sources said, will have to decide on who commands the majority in SP before January 17 when the notification for the first phase of assembly polls is issued.

The election for phase one is on February 2.

With the notification, the process of filing nominations will begin. Candidates from Mulayam and Akhilesh camps cannot fight election on cycle symbol at the same time, therefore, the EC will have to take a call on the issue before that date.

No feud in our party: Mulayam

Amid the ongoing power tussle in the ruling family of Uttar Pradesh, Samajawdi Party patriarch Mulayam Singh Yadav on Sunday asserted that there was 'no dispute' in the party.

Mulayam, along with Shivpal Yadav, on Sunday morning met party workers at the SP headquarters in Lucknow.

When asked about the ongoing tussle within the family and party, Mulayam said, "Hamari party me koi vivad nahi hai (There is no dispute in our party)."

He later, along with Shivpal, left for New Delhi, where he is likely to visit Election Commission for staking claim on the party's 'cycle' symbol.

The Mulayam camp is likely to submit its set of affidavits on Monday, the deadline set by the EC for both the sides to submit documents before it decides on which side to be allotted the ‘cycle’ symbol after the split in SP was formalised on January 3.

On Saturday, the Akhilesh faction submitted to the EC affidavits which it claimed to have signatures of ‘90 per cent’ of legislators and delegates, including over 200 of the 229 MLAs.

On reports that Mulayam got his room locked at the party office and put up his and Shivpal's name plates, SP state chief (Akhilesh faction) Naresh Uttam said, "Their name plates were never removed."

To another question, he said, "Akhileshji is our national president and we will contest polls under him. He was made president at national convention."

“These will be days of fast-paced developments. January 17 is still far...yes, if both sides claim support of equal number of legislators and office bearers and EC is unable to take a final decision, an interim order can be passed ... freezing the symbol is one such option available,” a source said.

Another source said if the two sides are willing to settle issue fast, EC can arrive at a conclusion before January 17.

According to the sources, if elections are imminent, then the poll body does not have the time to verify the legislative majority of both factions. In such a situation, it can pass an interim order asking both sides to pick a new party name and symbol.

This happened in the case of Uttarakhand Kranti Dal, a recognised state party in 2011. Both factions laid claim to the symbol ‘chair’.