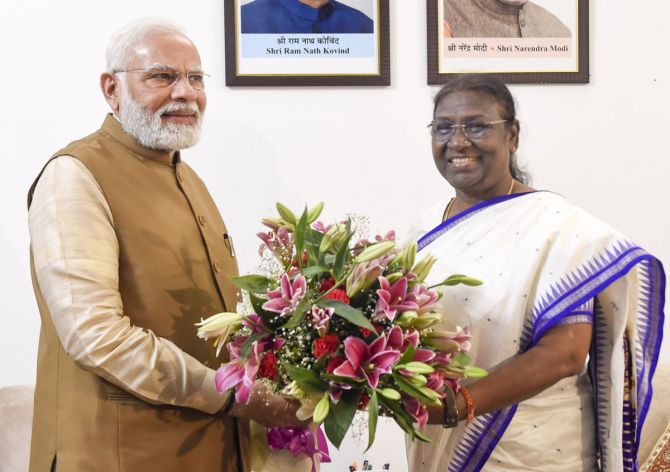 Murmu, 64, won by an overwhelming margin against Sinha after receiving over 64 per cent valid votes in a day-long counting of ballots of MPs and MLAs, comprising the electoral college, to succeed Ram Nath Kovid to become the country's 15th President.

After the end of the counting process that continued for more than 10 hours, returning officer P C Mody declared Murmu as the winner and said that she got 6,76,803 votes against Sinha's 3,80,177 votes.

Making an official announcement after the fourth round of counting, Mody declared Murmu as the winner with 64.03 per cent votes.

Sinha got 36 per cent of the valid votes polled.

Murmu bagged votes from a total of 2,824 electors, including 540 MPs, while her rival Sinha got votes of 1,877 electors including 208 MPs in the election.

"In my capacity as Returning Officer, I declare Droupadi Murmu as President of India," said Mody while declaring the final result of counting.

Among states Murmu got the maximum votes from Uttar Pradesh, Maharashtra and Andhra Pradesh while Sinha's tally was highest in West Bengal and Tamil Nadu.

Sources said 17 MPs from opposition parties have cross-voted in her support.

All MLAs from Andhra Pradesh and Sikkim voted in Murmu's favour, while in Arunachal Pradesh she got votes of all legislators except for four and all of all MLA except one in Nagaland.

Sinha did not get a single vote from assemblies in Andhra Pradesh, Nagaland and Sikkim.

All MLAs from Kerala voted for Sinha.

Murmu got maximum votes of Parliamentarians and least in Kerala where she got only one vote.

Officials said the National Democratic Alliance candidate received two-thirds of the votes in all the earlier three rounds of counting.

Conceding defeat, Opposition candidate Sinha congratulated Murmu and said that every Indian hopes that as the 15th President she functions as the 'custodian of the Constitution' without fear or favour.

In a statement, Sinha thanked the leaders of the Opposition parties for choosing him as their consensus candidate in this election.

'I also thank all members of the Electoral College who voted for me. I accepted the offer of Opposition parties solely guided by the philosophy of Karma Yoga preached by Lord Krishna in the Bhagvad Gita - 'Do your duty without expectation of the fruits thereof',' Sinha said.

Defence Minister Rajnath Singh also congratulated Murmu on her 'impressive' win and asserted that her victory is proof of India democracy's strength.

The Election Commission handed over the 'certificate of election' to her on Thursday night.

With each MP having a vote value of 700 in this presidential election, Murmu had a total vote value of 5,23,600 which is 72.19 per cent of the total valid vote count of MPs polled.

Murmu will be the first President to be born after independence and is the youngest to occupy the top post.

She is also the second woman to become the President. She will be sworn in on July 25.

Her victory was sealed after the third round itself when the returning officer announced that Murmu had already received over 53 per cent of the total valid votes even as ballots from 10 states and Union territories are still being counted.

Conceding defeat after the third round of counting, Sinha congratulated Murmu and said every Indian hope that as the 15th President she functions as the 'custodian of the Constitution' without fear or favour.

In a statement, Sinha thanked the leaders of the Opposition parties for choosing him as their consensus candidate in this election.

"I also thank all members of the Electoral College who voted for me. I accepted the offer of Opposition parties solely guided by the philosophy of Karma Yoga preached by Lord Krishna in the Bhagavad Gita -- 'Do your duty without expectation of the fruits thereof'," Sinha said.

"I have performed my duty conscientiously out of my love for my country. The issues I had raised during my campaign remain pertinent," he said. 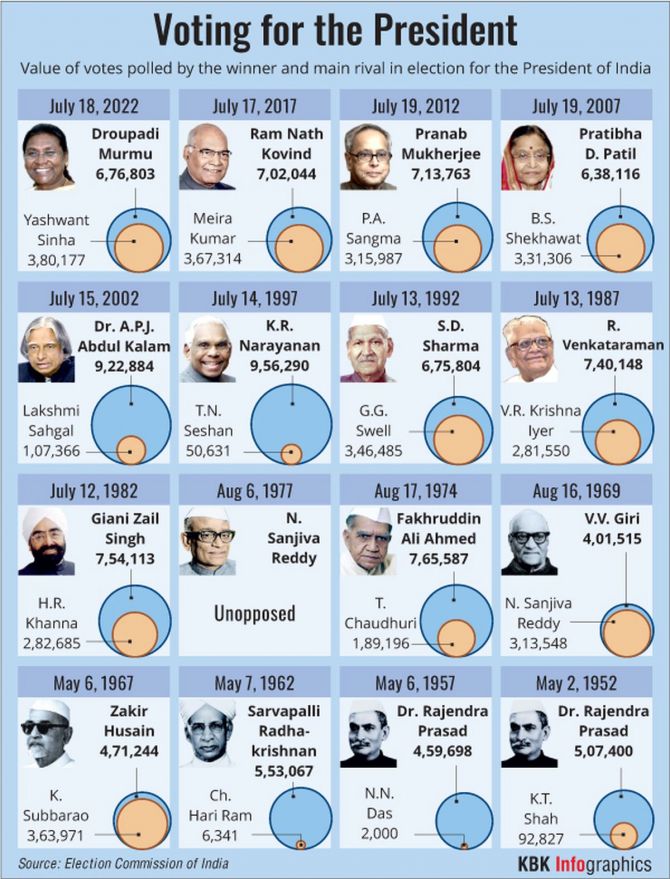 Immediately after the announcement of the NDA presidential nominee crossing the halfway mark, Prime Minister Narendra Modi and BJP president J P Nadda visited Murmu at her residence in New Delhi to congratulate her.

'India scripts history. At a time when 1.3 billion Indians are marking Azadi Ka Amrit Mahotsav, a daughter of India hailing from a tribal community born in a remote part of eastern India has been elected our President!' Modi tweeted

He congratulated Murmu on being elected to the top Constitutional post.

'Droupadi Murmu Ji's life, her early struggles, her rich service and her exemplary success motivates each and every Indian. She has emerged as a ray of hope for our citizens, especially the poor, marginalised and the downtrodden,' he said in a series of tweets.

The prime minister also thanked all MPs and MLAs across party lines who supported her candidature and said her 'record victory' augurs well for our democracy.

'Droupadi Murmu Ji has been an outstanding MLA and Minister. She had an excellent tenure as Jharkhand governor. I am certain she will be an outstanding President who will lead from the front and strengthen India's development journey,' he said.

Soon after counting began and she inched towards the halfway mark, celebrations began in her native town of Rairangpur congratulating 'Odisha's daughter', with folk artists and tribal dancers performing on the streets.

Murmu belongs to one of the largest tribal groups in the country, the Santhals.

Murmu's tribal background not only helped catapult her to the top post, but the BJP by fielding her is also eyeing crucial votes of the ST community in upcoming assembly elections in Gujarat, Chhattisgarh, Rajasthan and Madhya Pradesh, which have a significant tribal population, besides the 2024 Lok Sabha polls.

This also helped her get the support of a number of independent parties including the Biju Janata Dal, the Yuvajana Sramika Rythu Congress Party, the All India Anna Dravida Munnetra Kazhagam, the Telugu Desam Party, the Bahujan Samaj Party, the Janata Dal-Secular and the Shiromani Akali Dal, besides opposition's Jharkhand Mukti Morcha, Shiv Sena and Suheldev Bharatiya Samaj Party in her victory run.

By nominating her, the BJP is also seeking to get its foothold in Odisha's tribal-dominated belt, which it has been eyeing ever since it snapped ties with BJD in 2009.

Odisha goes to the polls along with the 2024 general elections and so does Andhra Pradesh, where there is a significant tribal population.

Murmu had contested the 2014 assembly election from Rairangpur, but lost to the BJD candidate.

Born on June 20, 1958, in Odisha's Mayurbhanj district, she catapulted into the national spotlight after being picked as the ruling NDA's presidential nominee in the July 18 polls.

It is from Rairangpur that she took her first step up the BJP ladder.

She was a councillor in the local Notified Area Council in 1997 and rose to be a minister in Odisha's BJD-BJP coalition government from 2000 to 2004. In 2015, she was appointed governor of Jharkhand and stayed in the post till 2021.

She is an excellent orator in Santhali and Odia languages and has worked extensively to improve infrastructure such as roads and ports in Odisha.

The low-profile Murmu, believed to be deeply spiritual, is a keen practitioner of the meditation techniques of the Brahma Kumaris, a movement she embraced after she lost her husband, two sons, mother and brother in just six years between 2009-2015.

An image soon after her announcement as NDA nominee for the top post was perhaps in sync with this facet -- her sweeping the floor of the Purnandeswar Shiv temple in Rairangpur in Mayurbhanj district. 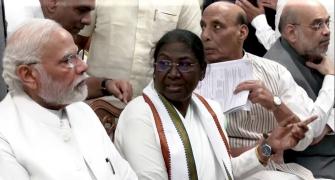 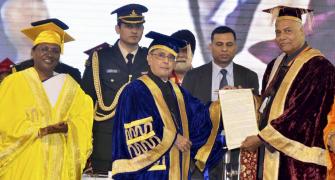 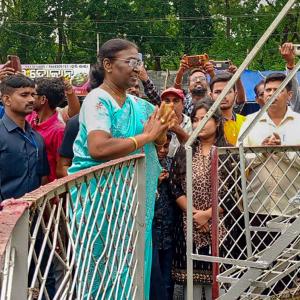 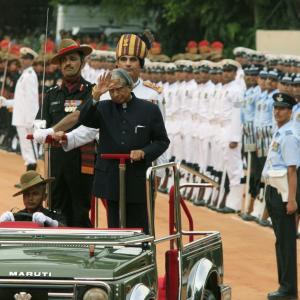