Dr Chishty gets bail, SC to hear is appeal to return to Pak

A bench of justices P Sathasivam and J Chelameswar granted him the reprieve, considering his old age and the fact that he has been held up in India for the last 20 years after a murder case was lodged against him when he came on a visit to Ajmer.

The court also agreed to hear Chishty's plea to allow him to go back to Karachi and asked him to file a separate application for it. The bench, however, asked Chishty not to leave Ajmer till further orders. "We are satisfied that a case is made out for enlargement on bail," the bench said while passing the order.

Chishty was granted bail a day after his case was discussed between the authorities of the two countries during Pakistani President Asif Ali Zardari visit to India.

During a visit to Ajmer in 1992 to meet his ailing mother, Chishty had got embroiled in a dispute and, in the melee, one of his neighbours was shot dead, while Chishty's nephew got injured.

Chishty was eventually held guilty in the murder case and was awarded life sentence case by an Ajmer sessions court after the trial which lasted 18 years trial. He had been granted bail by the sessions court during the trial but was ordered not to leave Ajmer. He was re-arrested after his conviction to served the sentence. 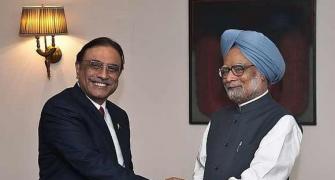