Two policemen and a cameraperson of Doordarshan were killed and two others were injured in a Maoist attack on Tuesday in poll-bound Chhattisgarh's Dantewada district. 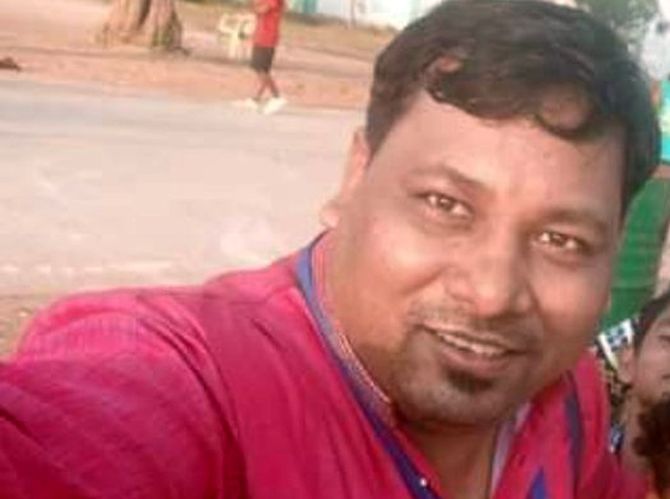 IMAGE: DD News cameraman Achyutanand Sahu from Delhi was with his team reporting on the upcoming elections in the state. Photograph: ANI

Two naxals were also believed to be killed in retaliatory action by the security forces after the ambush in a forest area near Nilawaya village, around 450 kms from Raipur, the police said.

The incident took place at around 11 am when a squad of local police was carrying out patrolling on motor cycles from Sameli camp towards Nilawaya on Tuesday morning, deputy inspector general (anti-naxal operations) Sundarraj P said.

A three-member team of Doordarshan was travelling for election-related news coverage at the same time and was caught in the cross-fire, he said.

Sahu had come from New Delhi for coverage of assembly elections to be held next month, he said.

Other two members of the DD team, including a journalist, were safe, the officer said.

The injured have been admitted to Dantewada district hospital, he said, adding that if required, they would be airlifted to Raipur for further medication.

D M Awashti, Special Director General (anti-naxal operations), said the exchange of fire between the maoists and security forces went on for about an hour.

The naxals then retreated into a village, with the security forces chased them, he said.

The security forces saw two people being dragged away by the maoists, which indicated that they were killed in the retaliatory action.

After the gunbattle, the security forces recovered 8 to 10 improvised explosive devices, which were later defused, Awasthi said.

He said the attack was not linked to the upocoming assembly elections but was aimed at discouraging men and contractors working on a road construction project.

"I would like to clarify once again that these two incidents -- one which took place this morning and another which took place three days back -- do not have any direct or indirect conection with the ensuing elections in the state," Awasthi said.

He said road construction work is underway at several places aross the naxal-affected areas over the last three years and this attack was aimed at thwarting the workers and contractors.

Union Information and Broadcasting Minister Rajyavardhan Singh Rathore condemned the attack and said the insurgents won't be able to weaken the government resolve.

"Strongly condemn the Naxal attack on @DDNewsLive crew in Dantewada. Deeply saddened by the demise of our cameraman Achyuta Nanda Sahu and two jawans of @crpfindia. These insurgents will NOT weaken our resolve. We WILL prevail," the minister tweeted.

He also announced financial assistance of Rs 15 lakh to the next of kin of the DD News cameraman.

Rathore said that Rs 10 lakh would be given as ex gratia by Doordarshan and Rs 5 lakh would be from the Journalist Welfare Fund of the Press Information Bureau, according to an official statement.

Teams of Central Reserve Police Force, Special Task Force and District Reserve Guard were immediately rushed to the forest to trace the ultras, the DIG added.

On October 27, four CRPF personnel were killed and two others were injured when Maoists blew up their bullet proof bunker vehicle in Awapalli area of Bijapur district.

The next day, a BJP leader and member of Dantewada Zila Panchayat Nandlal Mudiyami was seriously injured after ultras attacked him with sharp edged weapons at his village Palnar in Dantwada.

The state is going to polls next month and naxalites have asked voters to boycott the exercise.

The remaining 72 constituencies will witness polling on November 20.

The counting of votes will take place on December 11.