Don't put your lives at risk, be patient: Maha CM to migrants

Maharashtra Chief Minister Uddhav Thackeray on Friday expressed grief over the death of migrant workers from Madhya Pradesh in a train accident in Aurangabad district and announced a financial aid of Rs 5 lakh each to their families. 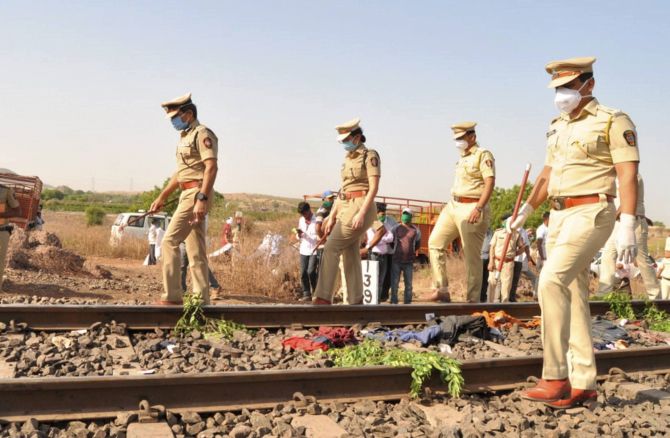 IMAGE: Police personnel inspect the spot after a goods train ran over a group of migrant workers while they were sleeping on the tracks, in Aurangabad district, on Friday. Photograph: PTI Photo

At least 14 migrant labourers from Madhya Pradesh, who were sleeping on rail tracks, were crushed to death by a goods train near Karmad station in Aurangabad district in the early hours of Friday.

Two other labourers were injured in the accident.

The migrant workers were walking along the rail tracks to reach Bhusawal from Jalna, 40 km from Karmad, on way to their villages in Madhya Pradesh. They slept off on the tracks due to exhaustion, an official said.

In a statement, Thackeray expressed grief over the tragedy and said the aid of Rs 5 lakh to each of the families of the deceased will be given from the Chief Minister's Relief Fund.

He said the cost of medical treatment of the injured would be borne by his government.

Thackeray said he was in constant touch with the Centre over the issue of running more trains to ferry migrant labourers, stranded due to the coronavirus-enforced lockdown, to their native places.

"Arrangements will be made soon. Labourers should not lose patience," he said.

After learning about the tragedy, Thackeray spoke to Chief Secretary Ajoy Mehta and railway officials to get details about what happened.

These labourers were employed in a steel manufacturing plant in Jalna, a neighbouring district of Aurangabad in central Maharashtra.

Special Shramik trains are being operated from different parts of the state to ferry stranded migrant workers to their native places.

Thackeray appealed to migrant workers not to put their lives at risk and stay at shelter camps till travel arrangements are made for them.

'The state government is in constant touch with the Railway ministry . A train will start from Mumbai, too, soon. I appeal to workers not to put their lives at risk .

'Shelter camps for the stranded workers are being operated by district administration. Arrangements for food and medicine have been made in these camps.

'Don't leave the camps till you are informed about train schedule,' Thackeray said in the statement.

Nationalist Congress Party chief Sharad Pawar on Friday termed the death of 14 migrant workers in the Aurangabad train accident as heart-wrenching and said the Centre must work closely in unison with state governments to ensure labourers reach their homes safely.

Pawar said the issue of migrants walking back to their native places must be looked into seriously and all necessary steps be taken for their safe journeys.

'News of migrants losing their lives in the Aurangabad railway accident is heart-wrenching. Issue of migrants walking on foot to go back to their hometowns must be looked into seriously and all necessary steps must be taken for their safe travel,' Pawar tweeted.

'(The) central government must work closely in unison with the state governments to ensure that these migrants reach their homes safely. My Condolences to families of the deceased, may their souls rest in peace,' he added.

The former Union minister said contractors/employers should take care of workers from the unorganised sector if the latter are leaving towns fearing loss of jobs.

The state governments too should form flying squads to take care of their (workers) needs consistently. The Centre and state governments should come together and solve the problem immediately, he said on the micro-blogging site.

Deshmukh, in his message, said the entire state is part of the grief of the kin of the deceased workers.

The accidental deaths of 14 workers, who worked in Jalna, in Aurangabad at dawn on Friday is quite shocking for the entire Maharashtra. Entire Maharashtra is part of the grief of the family of the workers. Prayers to God for giving peace to the souls of the deceased and courage to their kin, Deshmukh tweeted.

Water Resources Minister Patil said the news of the tragedy has left him numb.

Worker brothers, the government is making all efforts (to help you) reach your villages. Please do not travel risking your lives, Patil urged on Twitter.

'Deeply Saddened to hear about the demise of 14 Migrant workers in Aurangabad early this morning in a Train Accident. My Heartfelt Condolences (sic),' the Parliamentarian said on the micro-blogging site.