'I will not talk to people who call me a liar. I will not tolerate this,' the Sena chief said. 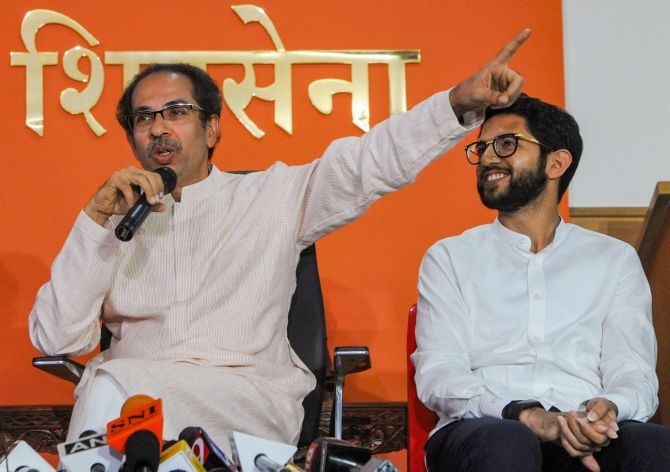 There will be no talks with the BJP unless it accepted that the two allies had decided share the chief minister's post, he said.

He will fulfill the promise made to his father, late Bal Thackeray, to install a Shiv Sena chief minister in the state, and "I do not need Shah or Fadnavis for this," Uddhav, who spoke to the media soon after Fadnavis resigned as chief minister, said.

Fadnavis, who resigned earlier in the day, claimed that the BJP leaders had not agreed on Sena's demand of sharing of CM's post.

"I will not talk to people who call me a liar. I will not tolerate this. The caretaker (CM) should not try to prove that I am a liar. I have never spoken lies in my life," Thackeray said on Fadnavis's claim.

Asked about the status of alliance with the BJP, Thackeray said, "BJP should state that there was agreement on sharing of chief minister's post. It was their prerogative to refuse my demand now, but they cannot not say this was never agreed on (in the past)."

"I will not have any truck with those who call me a liar. I stopped the government formation talks the day Fadnavis said sharing of chief minister's post was never
decided," he said.

The 'Amit Shah and company' was lying, he said.

Asked if the Sena will accept Fadnavis as CM, Thackeray said, "I want to ask RSS (Rashtriya Swayamsevak Sangh) whether speaking lies is part of your Hindutva.

He does not consider BJP as enemy but it should not make false statements, the Sena chief said.

Listing his grievances with the BJP, Thackeray said the Satara Lok Sabha seat was in the Sena's quota.

"But Fadnavis fielded Udayanraje Bhosale (in a byelection) on BJP ticket without asking me (when Bhosale, sitting MP, quit and joined BJP)."

On Fadnavis's charge that the Sena stooped very low while criticising the BJP in the last five years and also attacked Prime Minister Narendra Modi, Thackeray reminded the BJP of Bhosale's past critical comments about Modi.

"What did Udayanraje say about Modi when he was in NCP (Nationalist Congress Party)? What was (Jannayak Janata Party leader) Dushyant Chautala speaking about Modi before joining hands with BJP (in Haryana)?" he asked, and even played a video clip of Chautala's past statements.

The Sena had criticised the Modi governments' policies but not the prime minister in person, he said.

It was BJP chief Shah and Fadnavis who had approached him for a pre-poll alliance earlier this year, Thackeray said.

"My condition was sharing of chief minister's post. The talks had to be halted for sometime because of my demand. But Amit Shah contacted me again and later it was agreed. Devendra Fadnavis was aware of the decision. But he said let's not announce it now.

"Then Fadnavis told the media that all posts and responsibilities will be shared. Isn't chief minister a post? Isn't it a responsibility," the Sena chief asked.

Asked about the Shiv Sena's future course of action, Thackeray said, "Let the BJP form government first. The second option is that governor will invite the second largest party (which is Shiv Sena). When that happens, Shiv Sena will declare its stand. President's rule will be enforced if no government is formed."

The BJP and Shiv Sena are locked in a tussle over the chief minister's post, despite the assembly poll results on October 24 giving the alliance a combined seat strength of 161, way past the 145 majority mark in the 288-member House.

The Supreme Court is scheduled to pronounce on Saturday its verdict in the politically sensitive case of Ram Janmabhoomi-Babri Masjid land dispute in Ayodhya.

The apex court is likely to pronounce the judgment at 10.30 am.

"We had requested the government to make a law on construction of Ram Temple (in Ayodhya) but the government did not do that. Now, when the SC is going to pronounce the verdict, the government can't take credit for it (even if the verdict favours the pro-temple side)," Thackeray told reporters. 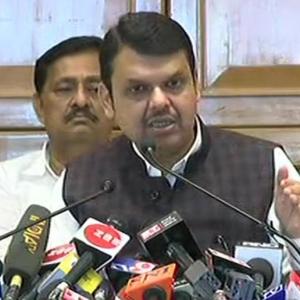 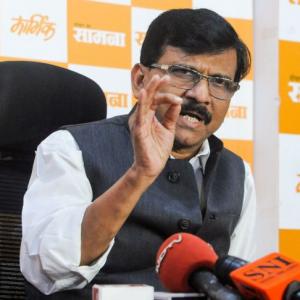 Best wishes if you can form govt: Raut to Fadnavis