Raut's 'best wishes' to BJP as MLAs shifted to resort 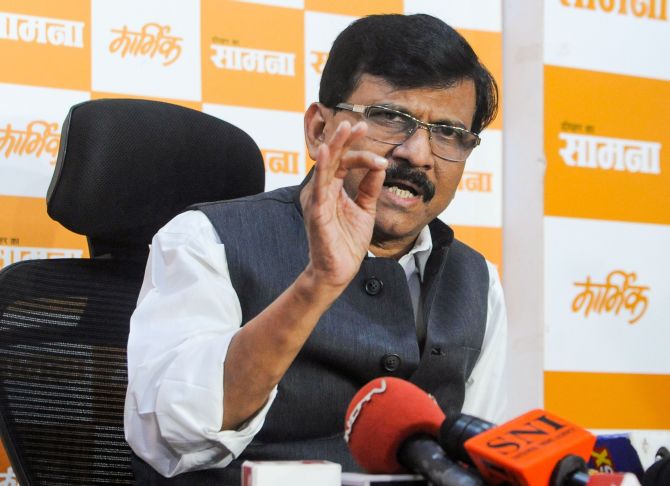 Shiv Sena leader Sanjay Raut on Friday said he extends his 'best wishes' to Devendra Fadnavis if the Bharatiya Janata Party leader was confident of forming the government in Maharashtra.

Meanwhile, the Shiv Sena on Friday sought police protection in Mumbai for its newly-elected MLAs, who will be shifted to a resort, till November 15, apparently fearing defection from its legislative rank.

Sena secretary Milind Narvekar has written a letter to the Mumbai police commissioner, seeking necessary protection for the party's MLAs till November 15.

In the letter, Narvekar said all MLAs would be staying at Retreat hotel in suburban Malad.

"Sena chief Uddhav Thackeray will be meeting his MLAs frequently for future decisions. We request you to provide necessary security measures," Narvekar said.

"We have received the letter from the Shiv Sena and the Mumbai police will take care of the security of their MLAs," the official said.

Chief Minister Fadnavis handed over his resignation to the governor on Friday afternoon after the deadlock over government formation in the state could not be broken even a fortnight after the assembly poll results were out.

"I also say, on behalf of my party, that we can form government if we want and there can be a Shiv Sena chief minister," Raut told reporters.

"Shiv Sena made no personal remarks about Modi or Shah. It is a wrong statement. We have always respected PM and the Home Minister. You can see our statements," Raut said.

He rubbished Fadnavis's allegation that Sena leaders held discussions with the Nationalist Congress Party and Congress amid the current stalemate.

"In several states, the BJP formed alliances with those who differ with the BJP ideologically, who had criticised (Prime Minister) Narendra Modi Saheb or other
leaders.

"BJP joined hands with several parties which had opposed it on issues ranging from Ram temple to Article 370. So the BJP should not talk about the Sena (on its criticism of the BJP and Modi) which takes strong nationalist position," he added.

To a question on Fadnavis' resignation as the chief minister, Raut said it was as per the tradition.

There has been no headway in government formation in the state even a fortnight after Assembly poll results were announced on October 24.

The BJP and Shiv Sena are locked in a tussle over the chief minister's post, resulting in a stalemate despite the poll results giving the saffron alliance a combined seat strength of 161, way past the 145 majority mark in the 288-member House.

'Not a word was spoken against Narendra Modi ji and Amit Shah ji, sad that Former CM of Maharashtra Devendra Fadnavis dragged them to speak disparagingly of an alliance partner of past 3 decades. Policy decisions? Yes, but personal attacks? No,' she tweeted.