Expressing concern over the unrelenting surge in COVID-19 cases in Bengal, doctors in Kolkata have written to Chief Minister Mamata Banerjee, urging her to take stricter measures to restrict public gathering during Durga puja, as it might 'lead to a tsunami' of infections. 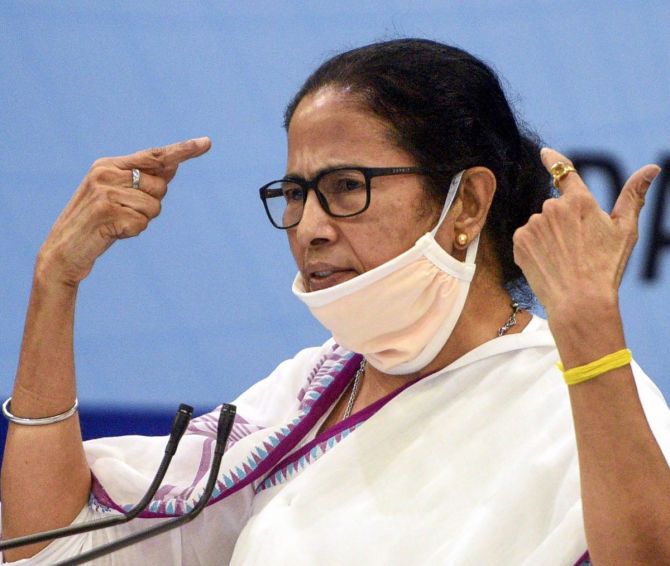 IMAGE: 'The situation may go out of hand leading to a tsunami of cases,' members of Joint Platform of Doctors told West Bengal Chief Minister Mamata Banerjee in a letter. Photograph: PTI Photo

BR Satpati, an advisor at the health department and member of the state's COVID-19 expert committee, however, asserted that the government was taking requisite measures to ensure people's safety.

Members of Joint Platform of Doctors, in their letter to Banerjee, referred to the steep rise in coronavirus cases in Kerala after the recent Onam festival, and a similar situation in Spain following International Women's Day celebrations and a football match to make their point.

They also attached with the letter a three-day rolling average of the daily number of infections in Kolkata, which showed a significant rise in caseload.

'We saw that the number of infections in West Bengal went up after Mahalaya and Vishwakarma Puja. It's an alarming signal. We have also seen how the situation deteriorated after priority was given to emotions to organise Onam festival, neglecting health protocols in Kerala.

'The infection rate in Kerala shot up by 750 per cent, following which Section 144 had to be imposed there,' the letter, signed by Dr Hiralal Konar and D Punyabrata Gun, joint convenors of the platform, said.

The doctors also reminded the chief minister that Ganesh Chaturthi was a low-key affair in Maharasthra this time, and Garba during Navratri has been cancelled in Gujarat, in the wake of the pandemic.

'In our state, too, Eid and Muharram were observed indoors. If we do not learn from these instances, and take precautionary measures to maintain health protocols during this Durga Puja, it can be suicidal.

'The situation may go out of hand leading to a tsunami of cases,' the forum said.

The platform further requested Banerjee to ensure that no public gathering takes place during Durga Puja.

'We would like to request you (CM) to take necessary steps to stop gathering of people at puja pandals. And people stepping out of their homes must mandatorily wear masks. We believe, at this moment, these are the two major protocols people must follow,' the letter said.

Dr Konar, when contacted, said calling off Durga Puja celebrations would have been the ideal thing to do, this year.

'We could have not organised the Durga Puja this year amid this pandemic. But that's not possible. There are so many factors involved. So many people will be exposed.

'Think about the police personnel, the civic police, the volunteers who will be on the road... this will make them more vulnerable to the disease,' Dr Konar tol PTI.

He also said that the transport movement should be controlled to discourage pandal-hopping.

'We will urge the administration to allow virtual pandal-hopping as that would stop people from going out. People must be encouraged to opt for virtual pandal hopping,' he added.

Satpathi, on his part, said the state was taking adequate steps to ensure safety of all, but people, too, have to be alert and follow the instructions.

"See, people have to follow the protocols while going out. We have to be alert. The state has taken all forms of precautionary measures. But if people do not follow them, there will always be a chance of a further spike in cases," Satpathi stated.

Echoing him, Dr Ashutosh Ghosh, another member of the COVID expert team, said maintaining health protocol is the only way forward.

"Obviously, we need to maintain physical distance and wear masks. We can already see that people are crowding market places. They will come out during the pujas, too. We must not forget the health protocols or the situation might turn critical," Dr Ghosh added. 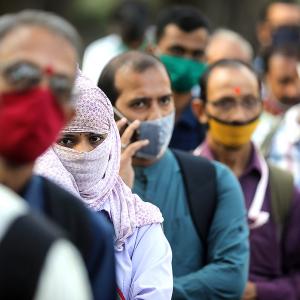 Benefit of the common cold? It may prevent Covid-19