Officers responsible for preparing budgets say their detailed costing projections are mostly ignored.
The defence ministry simply takes the previous year's budgetary allocations for each service and adds a small percentage to those.
Ajai Shukla reports. 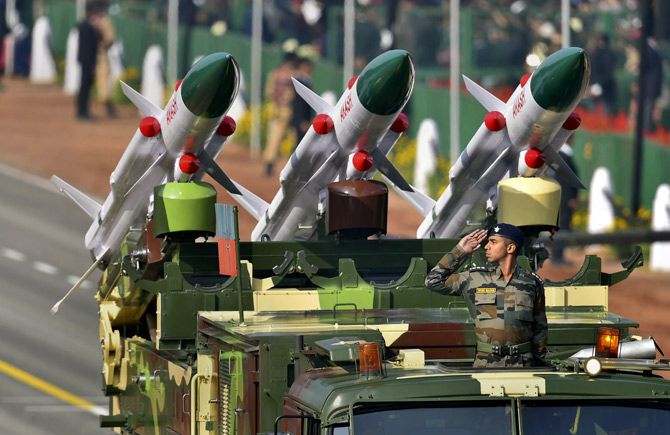 The defence budget, which the Union government presented on February 1, underlines that each of the three services remains locked in its own expenditure pattern.

The army, which most requires modernisation, continues allocating well over two-thirds of its budget to salaries and pensions, leaving just a little over one-tenth for new equipment.

The navy manages manpower best, spending just over a quarter of its overall budget on personnel costs.

Despite having the lowest capital allocation, it will still spend a healthy 45% of its budget next year on new warships and equipment.

The air force spends the largest percentage about half its budget, on modernisation and the purchase of new equipment.

None of these expenditure patterns has changed over the last decade.

Instead, the defence ministry simply takes the previous year's budgetary allocations for each service and adds a small percentage to those.

For that reason, budget allocations barely diverge from a simple formula: Give the army 60%, the air force 24% and the remaining 16% to the navy.

These are the figures that have solidified after the implementation of One Rank, One Pension effectively doubled the pension bill, and the 7th Central Pay Commission recommended across-the-board salary increase.

The army, already hamstrung by untenable personnel costs, took the biggest hit from these.

The army hierarchy is only now coming to terms with the realisation that it will have to prune numbers to have a substantial sum left for rifles, personal protective gear, man-portable missiles and artillery guns that it badly needs.

For decades, it has justified its large size by stating that 'boots on the ground' are essential for manning the sprawling mountain borders with China and Pakistan.

Parliament's standing committee on Defence has recommended revamping personnel policy, as have successive committees in recent years, including the Naresh Chandra Task Force and the D B Shekatkar Committee.

Only now has army chief General Bipin Rawat ordered a sweeping reorganisation that could see a major reduction in the army's 'tooth to tail ratio', including an unprecedented reorganisation and pruning of army headquarters.

In addition, there could be a shift to shorter service tenures for soldiers, which would reduce the government's pension liability and greater promotion mobility for officers.