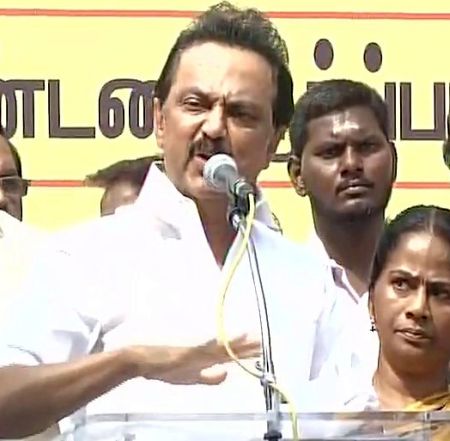 DMK working president and Opposition Leader MK Stalin, who pressed the Centre to immediately promulgate an ordinance to hold the sport and that AIADMK should also press Centre for it, said that "Tamils will not forgive" the two if such an urgent step was not taken.

Referring to the AIADMK MPs from the state petitioning prime minister on the issue on Wednesday, Stalin asked if they could meet Modi.

"Whom does Modi meet. Those known to him, including those from the cinema world, and immediately gives appointment to them. He has met actors including Salman Khan, Aamir Khan, Rajinikanth and Gautami. I am not criticising them, for they have their own pride. But, for Modi who allots time for these actors, can't he give time to AIADMK MPs to discuss an issue of heritage importance of Tamils," he said.

Stalin, who led DMK's state-wide protests from Chennai demanding Jallikattu be held this year, also questioned why Modi could not meet the MPs a different date if he unable to meet them earlier.

Hitting out at the ruling AIADMK, he said Chief Minister O Panneerslevam should have left to Delhi from Hyderabad yesterday, where he had gone for talks over the Krishna water-sharing with his Andhra counterpart N Chandrababu Naidu, after the Supreme Court declined to pass an order on Jallikattu.

The chief minister should have immediately met Modi and discussed Jallikattu, Stalin said.

Reiterating his demand for an ordinance on the matter, he said it was not new for the Centre to do so, as the present ruling dispensation at the Centre itself had brought 22 such ones, including for the NDA's controversial Land Acquisition Act.

"It is not too late, still a day is left for Pongal. Centre can promulgate an ordinance for the conduct of jallikattu... I humbly and rightfully ask on behalf of Tamils, bring and ordinance, else the people will not forgive Centre and state government," he said.

Since the first government post independence, Centre has so far promulgated over 600 ordinances on various issues, he added.

Stalin urged that the Centre should "dismiss" Animal Welfare Board of India for its strident stand against Jallikattu and said it should be replaced by a committee including a member from Tamil Nadu.

Such a task would not be difficult for the Modi government since it had even done away with the erstwhile Planning Commission, he said in an apparent reference to the formation NITI Aayog.