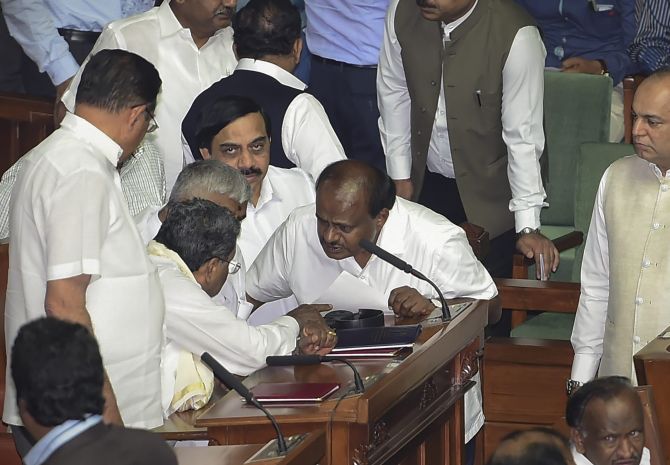 IMAGE: Karnataka Chief Minister H D Kumaraswamy talks with former Chief Minister Siddaramaiah and other leaders in the House during the first day of the Budget Session of Assembly, at Vidhan Soudha in Bengaluru, on Wednesday. Photograph: Shailendra Bhojak/PTI Photo

Playing hardball, disgruntled Congress MLAs skipped the assembly session for the second day on Thursday, even as the Bharatiya Janata Party blocked proceedings of the House, claiming the ruling coalition has lost majority.

Anxiety-gripped Congress has convened a legislature party (CLP) meeting on Friday ahead of budget presentation and warned its MLAs that absence would invite action under the Anti-Defection Law.

Opposition BJP continued its protest against the Congress-Janata Dal (Secular) coalition government from the Well of the assembly for the second consecutive day, forcing the speaker to adjourn the House without transacting any business.

"Nine MLAs from the ruling side have not signed the assembly attendance register today," official sources said.

Though a couple of legislators had given prior intimation about inability to attend, absence of legislators allegedly in touch with the BJP to switch sides, continued to be a cause of worry for the ruling coalition leaders.

Four MLAs- Ramesh Jarkiholi, Umesh G Jadhav, B Nagendra, Mahesh Kumathalli, who had skipped the January 18 CLP meeting and were issued notice, continued to remain absent from the House on Thursday too.

J N Ganesh, who is declared absconding after an alleged brawl with a colleague lawmaker at a resort recently, was also among the absentees.

From JD-S, lawmaker K C Narayana Gowda, who has not been attending the assembly since Wednesday, was allegedly in touch with BJP, according to top coalition sources.

However, Gowda speaking to a local channel has cited health reasons for his absence.

Senior Congress MLAs have expressed confidence about Jarkiholi, Jadhav, Nagendra and Kumathalli, along with B C Patil, being present at the CLP meeting.

Congress legislators have been asked to attend the 'special' CLP meeting 'without fail' to discuss the budget session, approval to the budget, legislation and other related matters by CLP leader Siddaramaiah.

The letter to all party MLAs also states that absence from the meeting would be viewed seriously and action taken against them under the Anti-Defection law.

A similar notice was issued to legislators ahead of the CLP meeting on January 18, which four of them had skipped,leading to resort politics in the state, amid alleged renewed bid by BJP to topple the government by poaching Congress MLAs.

Ignoring whip, nine Congress and one JD-S MLA had skipped the legislature sitting on Wednesday, that saw BJP members disrupting the address of Governor Vajubhai Vala to the joint sitting of the state legislature.

BJP, with numbers in the assembly still not in their favour, has decided not to move no confidence motion against the government and is expected to continue with disruption questioning the legitimacy of the coalition government.

As the assembly met for the day Thursday, slogan shouting BJP members trooped into the well of the House.

"Down down to the government that lost majority. Go back go back-CM go back, step down step down-CM step down," slogans reverberated in the House.

Hitting back, coalition ministers challenged the BJP to move a no confidence motion against the government.

As the BJP's sloganeering continued, Ministers B Z Zammeer Ahmed Khan, Priyank Kharge and Krishna Byre Gowda challenged the opposition to bring in no confidence motion.

Speaker Ramesh Kumar then asked Congress member S T Somashekhar to move the motion of thanks to the Governor for his address that was seconded by H K Kumaraswamy (JD-S).

However, Somashekhar could not initiate the discussionas the BJP's sloganeering continued, forcing the Speaker to adjourn the House for some time.

Again as the House resumed, BJP members continued withtheir protest from the well and said the government has lost both trust of the people and majority.

As the chaos continued, the Speaker adjourned the House till Friday.

The BJP is expected to continue its protest in the House on Friday too, when Chief Minister H D Kumaraswamy, who holds the finance portfolio, will present his coalition government's second budget, with an intention to disrupt it.

Speaking to reporters, BJP state president B S Yeddyurappa while defending disruption, flayed the government and Chief Minister for starting a new practice of distributing budget copies to MLAs and media, only after completion of presentation, citing Lok Sabha practice.

Yedyurappa, who is also the leader of opposition, also said the government that doesn't have majority has no moral right to table the Governor's address.

Not wishing to comment on ongoing political developments, Kumaraswamy said he would present the budget on Friday as per schedule.

"Let BJP protest, I can't do anything..I will answer to it on Monday," he said.

On the decision to distribute budget copies to MLAs only after he completes reading it, he said it was the Speaker's decision to follow the Lok Sabha practice.

Challenging the BJP to move a no confidence motion against the government, Coordination committee chief and former Chief Minister Siddaramaiah asked them to resign if they don't want budget presentation.

Siddaramaiah alleged that BJP was protesting as a face saver after not being able to topple the government despite all their efforts even after giving money to some MLAs.

He also expressed hope that all Congress MLAs will attend the CLP meeting that he has called on Friday.

However, amid reports that BJP was planning to defeat the finance bill, some BJP leaders sought to downplay it by saying, there has been no discussion on this yet.

"Let the budget be presented first tomorrow.. we will discuss all those things later," a senior BJP legislator said.