The Art of Living Foundation chose to hold the World Culture Festival on the Yamuna floodplains in spite of being aware of the environmental, legal consequences, letters exchanged between it and the Delhi Development Authority show. The letters, accessed by the environmental non-government organisation Yamuna Jiye Abhiyan during the case before the National Green Tribunal, show the foundation had twice been refused permission to hold an event in the area by the DDA.

Reviewed by Business Standard, they show constant communication between the Vyakti Vikas Kendra, a registered trust under which the AOL foundation functions, and the office of the chief engineer in charge of DDA's eastern administrative zone.

Queries sent to AOL on the disclosure remained unanswered at the time of this story going to print.

The letters, which form part of DDA's official submission to NGT, also point to a tug of war between the foundation and DDA over granting permission to hold the event over the last year.

They also show the DDA repeatedly shifting its official position on the matter.

The DDA had initially stated in a letter dated 18 May, 2015 that permission could not be granted owing to the area falling within the active boundaries of the Yamuna floodplains where it says, 'The National Green tribunal had banned all activities'. However, a letter dated 11 June eventually allowed permission after imposing a few conditions.

This happened after AOL had countered the DDA by saying all activities are not banned and it will not undertake any construction which pollutes the river in any form.

The Yamuna Jiye Abhiyan's founder Manoj Mishra says this contradicts AOL's official stance before the NGT where it claimed it could have chosen an alternative site had someone raised concerns regarding the ecological sensitivity of the area earlier.

The NGT in its order said it had given the nod to the event despite proof of environmental damage and violation of norms because the matter had been brought to court's notice too late in the day and there was a "reason of fait accompli capable of restoration and restitution."

The correspondence shows DDA yet again written to the AOL in a letter dated 30 November saying the event could not be allowed on the flood plains and had suggested using any of the other venues available with it after paying all requisite usage charges.

Finally, on 15 December permission was finally granted to the AOL after the DDA wrote a letter saying competent authority, in this case the lieutenant governor of Delhi's office had granted permission for the event. The same letter was also marked to the office of personal secretary to the urban development minister.

The letters also point out that AOL had repeatedly asked all charges for using the land be waived off since the festival was cultural in nature.

"It is again reiterated the festival is purely cultural, spiritual and non-commercial and therefore may be allowed to be held free of charge as requested earlier", it had told the DDA in its final letter to the DDA dated 4 December. Consequently, the DDA had said "No booking charges are leviable. The Organisation has to deposit Rs 15 lakh as security deposit (refundable)."

The event, held between 11-13 March have been condemned by environmentalists for checking the natural flow of the Yamuna by the building of pontoon bridges and artificial embankments and the levelling of a large area irrespective of the natural flora.

The NGT had also noted that work in the area 'has further disturbed the aquatic life of the river and destroyed water bodies and wet lands on the flood plains, which were in existence'.

However, it had set an initial fine of Rs 5 Crore as compensation for damaging the biodiversity of the flood plains apart from ordering the AOL to bear the entire cost of restoring the area to its natural state within two weeks. However, it had later brought it down to Rs 25 lakh, accepting the foundation's plea that the rest 95 per cent of the interim compensation be paid in three weeks times.

Image: Participants perform at the last day of World Culture Festival on the banks of the river Yamuna in New Delhi in this picture taken on March 13, 2016. Photograph: Adnan Abidi/Reuters 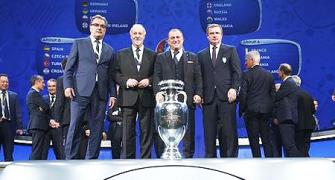