"In view of the violent activities reported at the dam site, it is imperative that Central forces be deployed at the dam immediately. I, therefore, request you to order deployment of Central Industrial Security Force at the site to avert any man-made catastrophic consequences immediately," she said in a letter to the Prime Minister.

She said there have been reports of vandalism organised by certain political parties of Kerala at the site. About 200 people had damaged a gate at Tamil Nadu Electricity Board facility yesterday, while certain "lumpen elements" went to the dam today from Vallakadavu (Kerala) with a JCB (excavator) and some equipment today with the intention of discharging water and wanting to damage the dam, she said.

"As I have pointed out earlier, the orchestrated campaign of fear mongering carried on by Kerala government has led to this situation wherein the very security and safety of the Dam is being deliberately threatened."

Jayalalithaa said it was pertinent to point out that dams
much older than Mullaiperiyar are functional. In Tamil Nadu, there is the more than 1,900 year-old Kallanai dam built by Karikaala Cholan in second century AD, which is still functioning due to regular maintenance.

The Chief Minister said people in delta areas of Tamil Nadu are not living in any fear of the dam bursting or collapsing. Similarly the Andhra Pradesh Irrigation Department maintains Godavari anicut and Krishna barrage, dating to between 1845 and 1855.

"May I also bring to your notice that the materials Major Pennycuick used to construct Mullaiperiyar Dam are the same that Karikaala Cholan used for the Kallanai 1900 years ago: stone and surki?", Jayalalithaa pointed.

She said the Advocate General, Kerala, has gone on record before division bench of the Kerala High Court submitting that even in the case of any eventuality, the Idukki reservoir, Kulamavu and Cheruthoni dams will take the waters.

"The Government of Kerala by its own admission recognises all safety measures are in place," she said.

"The current situation of fear and panic mongering by the Kerala government is beyond comprehension and requires mature and informed decisions and wise handling at the level of the Prime Minister," she said and sought CISF cover. 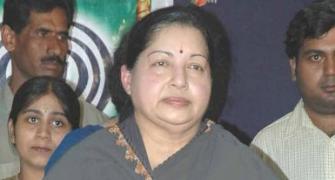