Some signs of normalcy in riot-hit northeast Delhi

Some signs of normalcy returned to riot-hit areas of northeast Delhi on Saturday as people stepped out of their homes to buy groceries and medicines from a few shops that opened amid intensified patrolling by security personnel. 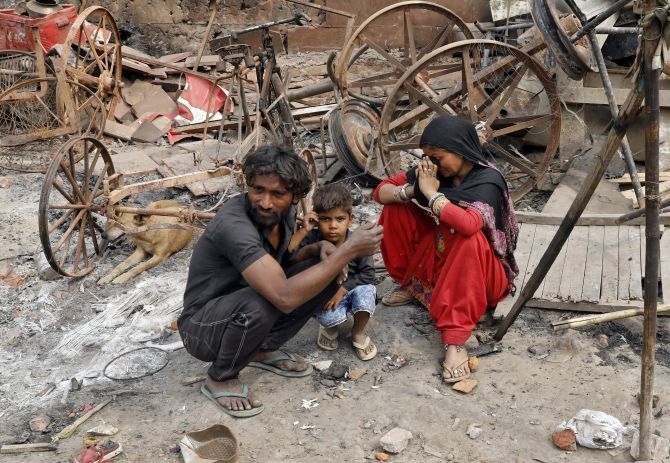 IMAGE: A woman sitting with her husband and their child reacts next to damaged property after their house was burnt by a mob on Tuesday in a riot-affected area in New Delhi, on Friday. Photograph: Adnan Abidi/Reuters

Since early morning, civic workers were seen clearing roads of bricks, glass shards and burnt vehicles in the aftermath of the violence that left 42 dead and over 200 injured. At some places, even bulldozers were used as it became difficult to manually remove debris.

In Jaffrabad, Maujpur, Yamuna Vihar, Chand Bagh, Mustafabad and Bhajanpura, which were among the areas worst hit by the communal violence, there were more vehicles and people on the roads than in the last five days.

Personnel from the Delhi Police and paramilitary forces encouraged people to open their shops and appealed for peace and communal harmony.

They started their march at Jaffrabad and moved through Maujpur and then into the narrow lanes of Noor-e-Ilahi, Yamuna Vihar and Bhajanpura, areas where mobs ran riot vandalising shops, houses and torching vehicles early this week.

"It is only the smaller shops that have opened today. The bigger shops and showrooms have still not opened and their owners are being cautious," a showroom owner, whose property was attacked during the riots, told PTI.

Shakib, a resident of Noor-e-Ilahi, said people selling vegetables on carts made rounds of colonies.

"Not many, only a couple of them could be seen. The rates are still a little high than the usual, but at least they have resumed sale," he said.

Yamuna Vihar resident Amit Tanwar said the situation has improved and grocery stores and other shops opened during the day.

However, some establishments like restaurants are still not open as their workers have not come to work, he added.

Officials on Saturday said schools will remain closed in northeast Delhi till March 7 in view of the violence. The annual exams have also been postponed since the situation is not conducive for conducting examinations in the violence-affected areas, they said.

Sources said the Delhi government is considering to issue a WhatsApp number for people to report circulation of provocative messages and take complaints on those spreading rumours.

Among the several houses torched by rioters was that of Border Security Force (BSF) Constable Mohammad Anees, who is currently posted at a camp of the force the in West Bengal's Radhabari. The BSF has decided to rebuild his house and hand it over to him as a 'wedding gift'.

At the Guru Tegh Bahadur (GTB) Hospital people are still frantically searching for their loved ones, either in the casualty ward or at the mortuary.

48-year-old Madeena, whose son has been missing since Tuesday following the violence, has been running to police stations to find if he is still alive.

"I have been going to police stations. There is no trace of him. I don't know if he is alive or not. Even if he is found here (at the mortuary) among the dead, I will get a closure at least. Otherwise I will live in hopes forever that he will come home some day," she said.\

Mohammad Qadir from Bijnor, who has been visiting the GTB Hospital since Wednesday, is looking for his 18-year-old brother Aftab.

"He had gone to meet his friends that day. His friends told me that they were attacked by a mob, while they managed to escape, he was beaten up badly," he said.

Bharatiya Janata Party leader Kapil Mishra, who is facing flak for allegedly making provocative statements before communal riots broke out in northeast Delhi, and families of some of the victims of the violence participated in a 'march against jihadi terrorism' taken out in Connaught Place on Saturday during which some people raised slogans of 'shoot the traitors'. 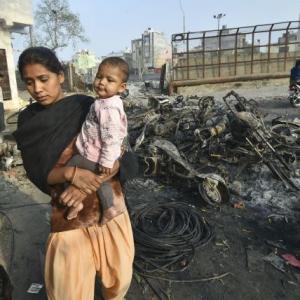