The residents of Shaheen Bagh, the epicentre of the anti-Citizenship Amendment Act protests, celebrated the stupendous success of the Aam Aadmi Party in the Delhi Assembly polls on Tuesday as many offered free food and biryani to celebrate the party's victory. 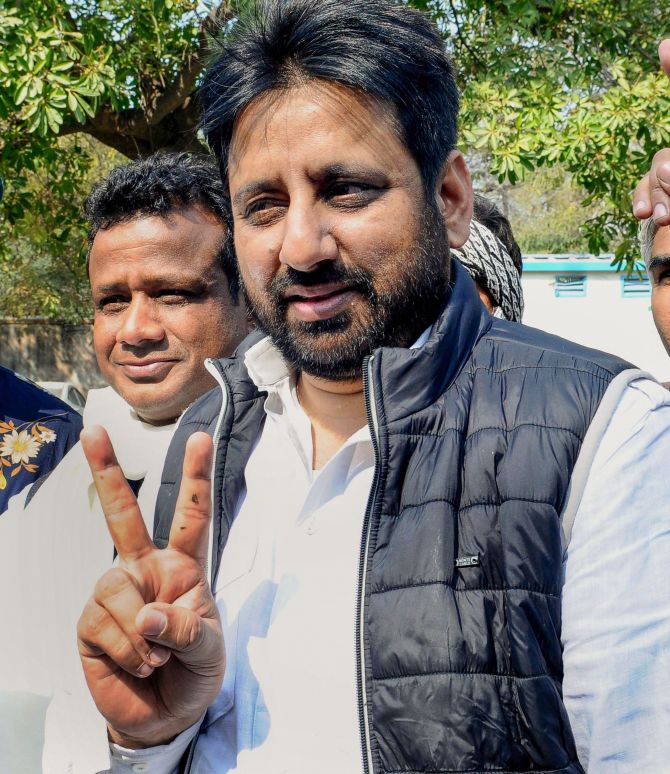 IMAGE: AAP leader Amanatullah Khan flashes the victory sign after he was declared winner from the Okhla Assembly seat, at a counting centre in New Delhi, on Tuesday. Photograph: PTI Photo

Shaheen Bagh has become the epicentre of protest against the CAA as women with young children have been on a sit-in protest for nearly two months.

"It is the victory of all of us. We all elected Amanat bhai (Amanatullah Khan) as our leader. He has helped the women and youth of this area in every sphere, that is, from health to education, infrastructure to jobs. He got many youth from this area employed," Shamima Bano from Shaheen Bagh said.

Women protesters erupted in joy with loud rounds of applause as they hugged each other.

"The AAP truly brought development to an aam aadmi (common man). My kids go to a nearby government school. We all go to the AAP government's Mohalla clinic for treatment. My mother-in-law is being treated for her knee problem since four years," Mehjabeen Qureshi said at the protest site.

"The AAP understands the needs of its citizens," she added.

The excitement was palpable at Batla House, Noor Nagar, Abu Fazal Enclave, Zakir Nagar and the adjoining areas when the news of the AAP winning big emerged.

Asim Khan, a garment dealer, said, "We have seen Jamia Nagar change in the last five years. We voted for AAP's honesty and transparent policies. Not only Jamia Nagar, entire Delhi voted for real 'vikas' (development), which is Arvind Kejriwal."

Sharvari, 75, of Shaheen Bagh said, "Amanatullah is like our son and his victory is not by chance. The AAP has understood the pulse of Delhi. Today we want to distribute 'biryani' to all those politicians who called our protest politically motivated and accused us of eating sponsored 'Biryani'".

The elections in the national capital took place in the midst of massive protests in the city and elsewhere over the new citizenship law, an issue which was strongly raised by the BJP top leadership during the campaigning which often turned bitter and vitriolic.

The political opponents of the BJP accused the saffron party of carrying out a 'divisive' campaign to polarise the voters by consistently highlighting the over 50-day demonstration by a group of women in Shaheen Bagh area.

Though BJP's campaign focused on national security issues, the AAP mainly focused on its achievements in the fields of education, healthcare and infrastructure.

Zubair Ahmed, a restuarant owner in Batla House said, "We are going to distribute free food today and on Friday to poor people in the honour of AAP's victory."

Sanjeeda Ahmed, another resident of the area said, "Okhla is seen as an industrial area. No one ever bothered to develop this area, but the AAP brought development of health, schools and roads here."