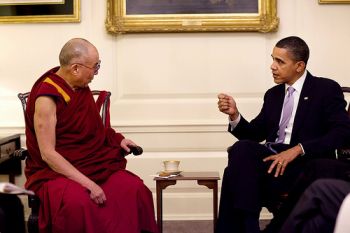 The two Nobel Peace Prize laureates met away from the cameras in the White House Map Room, in what is being billed as a low-key meeting, which the US administration calls private. But an angry China has warned that the meeting could worsen relations between the two powerful countries.

The Map Room in the mansion is the place where presidents stage private meeting. The parleys with the Dalai Lama are not taking place at the more stately Oval Office where Obama frequently meets with world leaders.

Terming it as an important meeting, Dalai Lama's Special Envoy Lodi Gyari said the 74-year-old Buddhist monk will speak about Tibet, and the two are also likely to discuss global concerns.

"His Holiness will be asking the President to help find a solution in resolving the Tibet issue that would be mutually beneficial to the Tibetan and Chinese people," Gyari said in a statement issued soon after the arrival of the Dalai Lama in Washington on Wednesday.

The visit comes despite stiff opposition from China, which urged the Obama administration to cancel the meeting, warning that it would damage Sino-US ties.

Analysts said the meeting will be muted because a public appearance by Dalai Lama and Obama would enrage China, which believes that official foreign contact with the monk infringes on its sovereignty over Tibet.

Image: President Barack Obama meets with His Holiness the Dalai Lama in the Map Room of the White House on Thursday | Photograph: Official White House Photo by Pete Souza 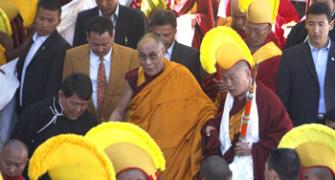