Death knell of Mamata regime has been sounded : Shah 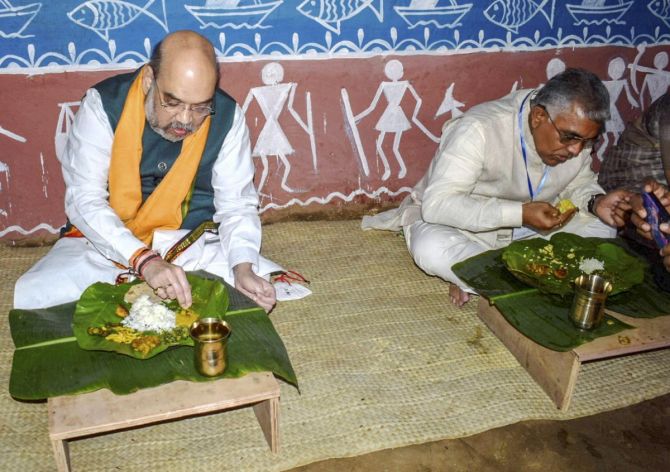 Shah, who held a closed door meeting to take stock of the party organisation, said he could 'sense massive public anger' against the Mamata Banerjee-led TMC government in the state and gave a call to 'uproot' it in the state polls.

Exuding confidence that BJP will come to power in West Bengal with two-third majority, he urged the people to give the party a chance to form the next government to fulfil the dream of 'Sonar Bangla' (golden Bengal).

"I am in West Bengal since last night and can sense the massive public anger against the Mamata Banerjee government. On the other side, I can sense hope among the people that a change can be ushered in the state only under the leadership of Prime Minister Narendra Modi," Shah told newsmen in Bankura after garlanding the statue of tribal freedom fighter Birsa Munda here.

The union minister, who is on a two-day tour to the state, hit out at the TMC government over the killing of BJP activists and said violence and political killings had become the hallmark of the TMC regime.

"From the kind of attack and atrocities that are being perpetrated on BJP workers, I can sense that the death knell of the Mamata Banerjee government has been sounded," he said.

In the afternoon while addressing a closed-door organisational meeting, Shah set the target of winning more than 200 seats in the state.

"During the closed-door meet, he told us that we need to ensure that the party comes to power with 200 seats.

"When I said we (BJP) will win 22 seats in Lok Sabha polls in Bengal many people asked me how could I speak of such a high figure. But when the poll results were declared we saw that we had won 18 seats and in some seats we had lost by a margin of two thousand to four thousand votes.

"Today I am saying that we will win 200 plus seats and form the government," Shah was quoted by him to have told the meeting.

Shah had played a major role in expanding BJP's base during his tenure as its national president in 2018.

He had set a target of winning 22 seats out of the 42 Lok Sabha in the 2019 parliamentary polls. The party had bagged 18 seats, four less than ruling TMC, with a vote share of 40.5 per cent.

The BJP presently has eight seats in the state assembly. It also has the support of eight MLAs who had switched over to the saffron camp from TMC after the 2019 general election.

According to party sources, during the organisational meeting Shah asked party functionaries to vow that the BJP would come to power by bagging 200 out of the 294 assembly seats.

The union minister while talking to newsmen assailed the Trinamool Congress government saying that the benefits of over 80 central schemes, including PM-Kisan and Ayushman Bharat, could not be reached to the poor in the state.

"Mamata Didi is under a false impression that by not allowing the central schemes, she will be able to stop the BJP in the state. I want to tell her that if she allows these schemes, then the poor might think of her," he said.

Shah, who arrived in Kolkata on Wednesday night to take stock of the party's organisation ahead of the 2021 assembly polls, noted that West Bengal is a border state and the security of the state and the country is interlinked.

He also had lunch at the house of a tribal BJP worker at Chaturdihi village in Bankura district besides meeting Central Reserve Police Force officials.

Reacting to Shah setting the target of more than 200 seats in the assembly polls, TMC MP Sougata Roy said the BJP leader is 'unaware of the ground realities' and is 'daydreaming'.

"It is laughable that a party which does not have a face in Bengal to counter the popularity of Mamata Banerjee, has set a target of 200 seats. It seems he is not aware of the ground realities and is daydreaming," Roy said.

Echoing him, party colleague and minister Firhad Hakim mocked Shah's scheduled lunch at the house of a tribal family as nothing but a 'poll gimmick' and a desperate attempt to divert attention from atrocities on tribals across the country.

"Across the country in BJP ruled states, the tribals and the Dalits are being tortured. There are reports every day of atrocities against the backward communities by the BJP led state governments.

"This is nothing but a poll gimmick ahead of the assembly election," Hakim said adding that tribals, Dalits and the Matuas in the state are with the TMC.

The saffron party after having a limited presence in the politically polarised state for decades has emerged as the main rival of the TMC in the last few years.

Its leaders are upbeat that the party will end the TMC's 10-year- long rule in the assembly polls scheduled in April-May 2021. 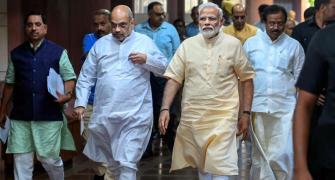 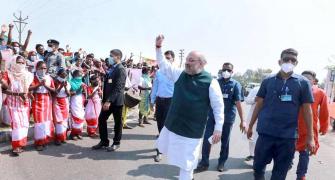