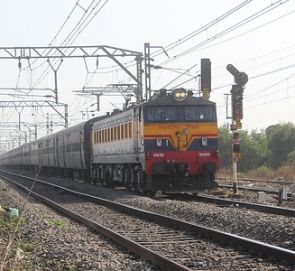 At last 37 pilgrims, locally known as kanwariyas, (devotees of Lord Shiva) were crushed to death under the wheels of the Saharsa-Patna Rajyarani Express near Dhhamara railway station in Bihar's Khagaria district on Monday morning.

Additional Director General (law and order) S K Bhardwaj has confirmed that 35 pilgrims were killed and over a dozen injured in the accident.

A district police official said that one of the two train drivers succumbed to injuries after he was beaten up by angry locals.

"Another driver is battling for his life," a police official said.

The kanwarias were waiting on the tracks after alighting from the Samastipur-Saharsa passenger, when they were run over by the Saharsa-Patna Rajyarani Express, officials said.

Railway Board Chairman Arunendra Kumar said the train was not supposed to halt at Dhamara Ghat. It had been given clearance to pass through the area but the devotees were waiting on the tracks, thinking they could stop the train.

Though the driver applied emergency brakes, it was too late to stop the train, he said.

An internal inquiry has been ordered into the incident.

The pilgrims were going to nearby Katyani Sthan temple to offer jalabhishek to Lord Shiva on the fourth and final Monday of the holy month of Shrawan.

Soon after the accident, local people attacked the train drivers.

The engine of the Samastipur-Saharsa passenger train and an AC coach of the Saharsa-Patna Rajyarani Express were set on fire by enraged locals, said Superintendent of Police S K Jha.

Minister of state for Railways Adhir Ranjan Chowdhury said that the express train was travelling at a speed of 80 km per hour when the accident occurred.

Although relief trains carrying doctors and nurses had been sent from Saharsha and Barauni, they could not reach the spot due to protests by angry locals.

According to sources, Bihar Chief Minister Nitish Kumar has demanded that the families of the victims be provided compensation.

But the railway ministry is not inclined to do so as the victims were illegally crossing the tracks, the sources said.

Kumar expressed grief over the train accident and asked the railway department and the Khagaria district administration to launch rescue and relief work to save the lives of the injured people.

Khagaria Member of Parliament Dinesh Chandra Yadav demanded that the families of the dead should be given Rs 10 lakh compensation each.

The station where the accident took place falls between the Saharsa-Mansi section of Samastipur division. Local passengers threw stones at the Rajyarani Express, which stopped after a distance following the accident.

Train services have been suspended on the route following the accident, officials said.