Braving rain and cold, anti-Citizenship Amendment Act protesters continued their agitation at Delhi's Shaheen Bagh for the 25th consecutive day on Wednesday, as two of them, who are on liquid diet, remained at the centre stage demanding withdrawal of the contentious legislation. 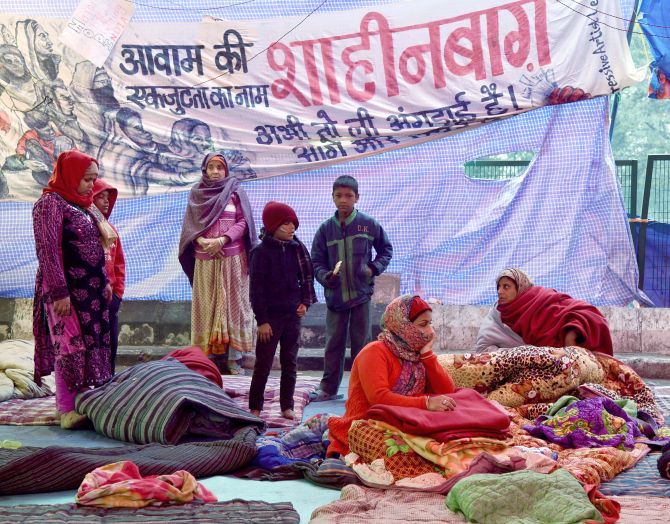 IMAGE: People, including women and children, are protesting at Shaheen Bagh and nearby Jamia Millia Islamia to oppose the CAA and the NRC. Photograph: ANI Photo

Zainul Abidin, around 45, in December had launched his hunger strike to protest against the Citizenship Amendment Act and proposed pan-India National Register of Citizens.

He was joined by Mehrunissa, around 40, over a week ago.

Besides them, a trio of elderly women, now famously known as the “Dabang Dadis” of Shaheen Bagh, stayed put at the protest venue which has come up on the Sarita Vihar-Kalindi Kunj road in South East Delhi since December 15.

“There's no going back on this protest till the CAA is repealed and the government assures of dropping the NRC proposal. The people's spirit is unfazed by slight rains and it is continuing as it is,” Shaheen Bagh resident Syed Taseer Ahmed said.

Since Wednesday morning, hundreds of people remained at the venue notwithstanding the drizzle, even as shops remained closed along the road, which has been blocked for 25 days.

The road is a key link between Noida and Delhi and has been closed by the Noida Traffic Police in view of the ongoing protests.

“Now as the night draws in, more people will join the protest and the crowd size would swell up manifolds,” Taseer said.

A major part of the crowd at the protest is formed between 8 pm and 12 pm, when the regular protesters are joined by working professionals and businessmen who return from work in the evening, he added.

Thousands of people, including women and children, are protesting at Shaheen Bagh and nearby Jamia Millia Islamia to oppose the CAA and the NRC.

Besides Delhi, protests have unfolded in several parts of the country over the contentious law and have led to clashes at several places, including Uttar Pradesh, where more than 20 people have died.

According to the amended law, members of Hindu, Sikh, Buddhist, Jain, Parsi and Christian communities who have come from Pakistan, Bangladesh and Afghanistan till December 31, 2014 and facing religious persecution there will not be treated as illegal immigrants but given Indian citizenship. The law excludes Muslims.