Disputes over a temple has torn a Tamil Nadu village apart.
Rediff.com's A Ganesh Nadar reports. 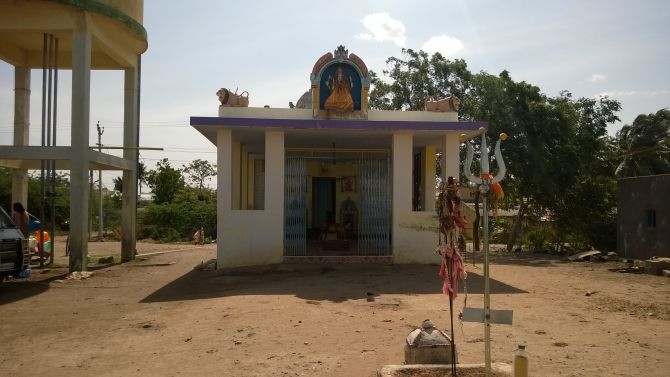 IMAGE: The temple in Malaykovilur village in Tamil Nadu's Karur district, which has become the cause for discord between different communities. Photograph: A Ganesh Nadar/Rediff.com

Dalits in Malaykovilur in Tamil Nadu's Karur district threaten they will convert to Islam. Other villagers threaten self-immolation. All this because of a conflict over the local temple.

Several castes live in the village. The clash concerns a temple they built together seven years ago.

Before this temple was built, the village had a temple which belonged to the dominant Gounder caste. The Gounders allowed the other villagers, including the Dalits, to pray from outside the temple. They were not allowed inside nor given prasad after prayers.

Fed up of the discrimination, the non-Gounder villagers decided to build their own temple.

They collected money across caste lines and received a grant of Rs 25,000 from the Tamil Nadu government. A committee was formned to oversee the temple's construction.

The committee was headed by Pichumuthu, a teacher who belonged to the scheduled castes. After the Samuthuva Mahasakhti Mariamman temple was built, the committee conducted the annual temple festival with all the villagers involved in the festivities.

This bon homie dissolved after Pichumuthu died. The villagers selected another head of the temple committee and the annual temple festival continued as before.

But the Dalits felt neglected and discontent soon raised its head in the village. Acrimony surfaced over minor disputes concerning the temple festival. In 2015, despite several such flashpoints, the temple festival went on as planned.

In April this year, the Dalits conducted their own temple festival and did not invite the other villagers. They formed a trust and dropped Samuthuva -- which means inclusive -- from the temple's name.

The Dalits wanted the temple for themselves and named Pichumuthu's son Vetrivel as their leader.

Earlier this month, the other villagers decided to conduct their own temple festival, but the Dalits did not permit them to do so.

The other villagers then approached the district administration and secured permission to conduct the festival for three days under police protection.

In the melee, the Dalit was allegedly assaulted by the man who had donated the trishul to the temple. Both men are now in hospital.

The Dalits in the village now threaten to convert to Islam if the temple is not given to them.

The temple is locked, the keys are with the priest and he has been told not to open the temple till the dispute is resolved.

"The temple belongs to all the villagers as we built it together. We prayed together for six years," Panchayat President Palaniamma tells Rediff.com. "Last year they (the Dalits) have been fighting about who should lead the prayer committee."

A villager, who works for the state government, speaking on condition that he would not be identified by name for this report, feels, "It all happened because of Pichumuthu's death. When he died, his son Vetrivel thought they would make him head of the temple committee. When this did not happen, he started instigating the Dalits to oppose the others."

"They (the other castes) are in a majority in the village," says Geeta, the daughter of the new trust's treasurer, who is at the forefront of the Dalits' agitation. "So, they are trying to take the temple away from us. It is our temple. The government gave us money to build it from the SC fund."

The other villagers dispute this and insist that the money was not released from the state government's SC fund. They say they have the support of over 82 families of Udayars, Devars, Nadars, Ambalathar, Agamudiyars and also 12 Dalit families.

Only 15 Dalit families in the village, they say, want the temple for themselves.

Disputing this, Verivel says, "We are 45 families. Our relatives who belong to this village work in the cities. That doesn't make them outsiders."

"We are the original inhabitants of this village," claims Geeta. "The rest are outsiders. Many of them came from Sri Lanka to work in the mill (which was shut down in 2003) and a few came from other parts of this district. How can outsiders say it is their temple? How can the temple belong to them?"

"We will convert to Islam if we cannot pray in our own temple," she declares, not seeing the irony of her statement.

"One person from each of our 82 families will commit self-immolation in front of the temple if we are not allowed to pray there," warns the villager who works with the state government.

"We conducted a peace meeting and the temple festival went off peacefully. Now, there is no law and order problem," district revenue officer Balasubramaniam tells Rediff.com, "We will interfere only if the police tells us. In the meanwhile, we have told the villagers that the ownership of the temple can only be decided by the courts."