According to the India Meteorological Department (IMD), Tauktae which has taken the form of a 'very severe cyclonic storm' is likely to intensify further during the next 24 hours and reach the Gujarat coast on Monday evening.

Maharashtra too was bracing for impact as the Met department predicted heavy to very heavy rains at isolated places in north Konkan, Mumbai, Thane and Palghar and extremely heavy rainfall in Raigad on Monday.

Two persons died in Goa in separate incidents caused due to gusty winds triggered by cyclone Tauktae, which also damaged hundreds of houses and blocked some highways in parts of the state as trees fell at several points, Chief Minister Pramod Sawant said.

The major impact of the cyclonic winds was felt in Bardez taluka in North Goa district and Mormugao in South Goa, he said.

The water level in many dams across Kerala showed a rising trend after heavy rains in the catchment areas, prompting authorities to sound an alert. Power supply in a majority of areas of Goa was disrupted as hundreds of electric poles were uprooted due to the high-speed winds, state Power Minister Nilesh Cabral told PTI.

"Many high tension 33 KV feeders are down due to the falling of trees. Even the 220 KV lines bringing power to Goa from neighbouring Maharashtra have been damaged," he said.

The electricity department deployed its full force for the restoration work, but it was getting hampered due to the strong winds, he said.

The state Fire and Emergency Services control room was flooded with hundreds of calls from locals about the falling of trees and blocked roads, its director Ashok Menon said.

"Our force has been working since last night to clear the roads and remove trees which have fallen on the power lines," Menon said.

In Karnataka, over 70 villages in seven districts including Dakshina Kannada, Kodagu and Hassan have been affected by the cyclone, the Karnataka State Disaster Management Authority officials said.

The highest rainfall of 385 mm was recorded at Nada Station in Kundapura taluk of Udupi district, which was the worst affected, and 15 stations recorded more than 200 mm of rainfall in the district. IMAGE: NDRF team clears a road blocked by the falling of trees due to strong winds during the formation of cyclone Tauktae, near TB hospital in Panaji, on Sunday. Photograph: PTI Photo

The rainfall was accompanied by strong winds with speed reaching up to 90 km/per along.

According to the Cyclone Warning Division of the IMD, by May 18 the wind speed is expected to increase to 150-160 km per hour, gusting up to 175 km per hour.

Officials said nearly a dozen relief camps are functioning in the state. There has been damage to 112 houses, 139 electricity poles and other infrastructure in coastal areas.

Chief Minister B S Yediyurappa has asked in-charge Ministers of coastal districts and Deputy Commissioners there to visit the affected areas and carry out rescue and relief works.

The IMD has issued orange alerts -- a warning indicating heavy to very heavy rain -- on Sunday in three Kerala districts-Ernakulam, Idukki and Malappuram.

Hundreds of houses were damaged in coastal areas across the state as seawater seeped in following high waves.

According to the state government, at least nine districts have been severely affected by sea incursion.

The Thrissur district administration said spillway shutters of the Peringalkuthu dam will be opened if the water level crosses the permitted limit of 419.41 metres. In a statement, the administration has urged the people living on the banks of Chalakudy river to be cautious.

Shutters of Malankara dam in Idukki district will be opened on Sunday, as the water level has increased, the district authorities said.

Families living in coastal areas and low-lying areas of the state have been shifted to relief camps. Indian Navy on Sunday deployed its diving and quick reaction teams in the coastal village of Chellanam in Ernakulam district, which was heavily hit by tidal waves. The teams, braving harsh weather conditions, undertook rescue and rehabilitation of people who were trapped in houses.

High tidal waves have also lashed Kaipamangalam, Chavakkad and Kodungallur in Thrissur, Pallithura in Thiruvananthapuram, Thrikkannapuzha in Alappuzha and Beypore and Koyilandy in Kozhikode districts.

The cyclone has added to the woes of the states which are already grappling with the devastating third wave of COVID.

The National Crisis Management Committee (NCMC) headed by Cabinet Secretary Rajiv Gauba met on Sunday in the national capital, where the top bureaucrat of the country directed agencies to ensure "uninterrupted" functioning of the COVID hospitals in the states affected by Cyclone Tauktae and secure "zero loss" of lives.

Prime Minister Narendra Modi had on Saturday reviewed the preparedness of states, central ministries and agencies concerned to deal with the situation arising out of Cyclone Tauktae and asked them to take every possible measure to ensure that people are safely evacuated.

At the high-level meeting which was attended by Home Minister Amit Shah and top officials, Modi directed them to ensure special preparedness on COVID management in hospitals, vaccine cold chain and other medical facilities on power back up and storage of essential medicines and to plan for unhindered movement of oxygen tankers, the PMO said. 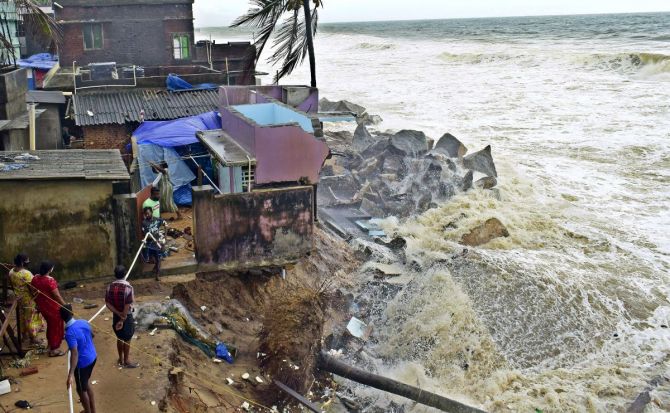 IMAGE: Rough sea and high tidal waves due to cyclone Tauktae at Pallithura area in Thiruvananthapuram on Sunday. Photograph: K B Jayachandran/ANI Photo

Maharashtra Chief Minister Uddhav Thackeray said an alert has been sounded in coastal districts of the state and the administration is prepared to ensure uninterrupted electricity and oxygen supply in COVID-19 hospitals.

During a virtual meeting with Shah, Thackeray said jumbo COVID-19 centres and other facilities can protect patients from rain. But, in view of the cyclonic storm, some patientsfrom Mumbai and other areas have been shifted to safer places.

The IMD said Tauktae would cross Gujarat's coast between Porbandar and Mahuva in Bhavnagar district by early Tuesday morning and tidal waves are likely to inundate several coastal districts during the landfall.

'The very severe cyclonic storm Tauktae over the east-central Arabian Sea moved nearly northwards with a speed of about 11 kmph during the past six hours,' it said.

'It is very likely to intensify during the next 24 hours. It is very likely to move north-northwestwards and reach the Gujarat coast in the evening hours of May 17 and cross the state coast between Porbandar and Mahuva in Bhavnagar district around May 18 early morning,' the IMD said.

With the cyclone intensifying, the wind speed along and off Gujarat coasts in Porbandar, Junagadh, Gir Somnath and Amreli districts will reach 150-160 kmph gusting to 175 kmph by Tuesday morning. IMAGE: Electric poles fell due to heavy rain and wind from Tauktea cyclone, at Bidarahalli near Chikmagalur, on Sunday. Photograph: PTI Photo

It will reach a speed of 120-150 kmph gusting to 165 kmph over Devbhoomi Dwarka, Jamnagar, Bhavnagar districts during the same period, the IMD said.

'Gale winds with speed reaching 70-80 kmph gusting to 90 kmph are likely to prevail along and off Valsad, Navsari, Surat, Bharuch, southern parts of Ahmedabad, and Anand districts, as well as Dadra, Nagar Haveli, Daman (Union Territories) from May 17 midnight till Tuesday morning,' it said.

The sea conditions will become 'very rough to high' along and off the south Gujarat coast from Monday morning, and "very high to phenomenal" from Monday midnight.

A tidal wave of about 3 metres, 1-2.5 metres above the astronomical tide, is likely to inundate several coastal areas of the state during the time of the landfall, it said.

Fishermen have been warned not to venture into the sea, the state government said, adding that 107 out of the 149 fishing boats which were out into the waters returned to the coast by Sunday morning.

"With the cyclone likely to affect power supply, hospitals treating COVID-19 patients have been asked to ensure power back-up. Arrangements have also been made to ensure uninterrupted generation of medical oxygen in the eight manufacturing units and buffer stock has also been created," Chief Minister Vijay Rupani told reporters after attending a cyclone review meeting in Gandhingar. 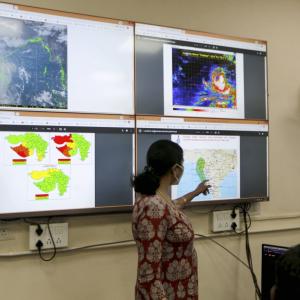 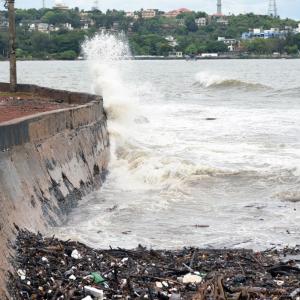