Cyclone Tauktae: Death toll in Gujarat goes up to 79

As many as 79 people have lost their lives in incidents related to cyclone Tauktae in different parts of Gujarat, officials said on Thursday as the authorities carried out restoration work in affected areas and launched damage assessment exercise. 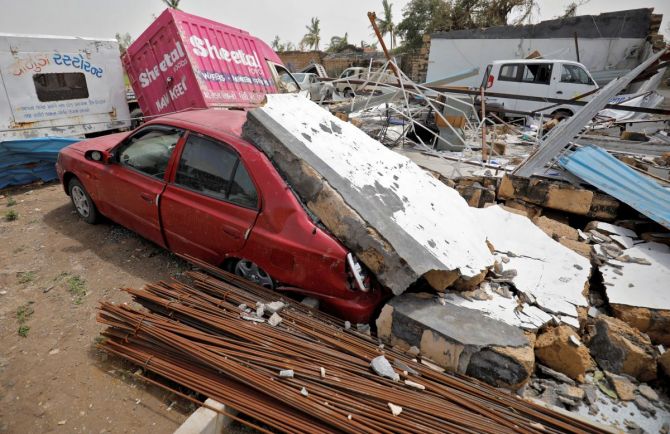 Amreli in the Saurashtra region was the worst affected district with 45 deaths so far, said an official of the Amreli District Emergency Operations Centre (DEOC).

As per Gir-Somnath DEOC, as many as 11 people have been killed in different cyclone related incidents in the district.

In Bhavnagar, nine persons have died, the district DEOC said.

Amreli, Gir-Somnath and Bhavnagar districts bore the maximum brunt of the powerful storm.

Cyclone Tautkae made a landfall on Monday night near Una town in Gir-Somnath district and wreaked havoc for around 28 hours in the state before it weakened into a depression.

As per figures of other districts shared by the State Emergency Operations Centre (SEOC), five people were killed in Ahmedabad, two in Kheda and one each in Anand, Vadodara, Surat, Valsad, Rajkot, Navsari and Panchmahal districts.

It also caused large-scale damage to communication and electricity infrastructure.

On Wednesday, Prime Minister Narendra Modi conducted an aerial survey of cyclone-affected districts of Gujarat and announced a package of Rs 1,000 crore to carry out 'immediate relief activities'.

The state's compensation was in addition to the central government's financial assistance of Rs 2 lakh for the kin of the deceased and Rs 50,000 for the injured, said a government release on Wednesday.

Earlier on Thursday, Rupani conducted an aerial survey of cyclone-hit areas in Amreli and Gir-Somnath districts and later said compensation will be given after assessment of damage caused to crops and property.

After the aerial survey, Rupani visited Garal village under Una taluka of Gir-Somnath district and interacted with local residents.

He assured the villagers that his government is working on a war footing to restore normalcy in the entire coastal belt, ravaged by the powerful storm that hit the state three days ago.

"Most of the kutcha houses in Una were destroyed. Standing crops as well as mango and coconut trees were also uprooted.

"A survey to assess the loss has been initiated from today and compensation will be announced accordingly," Rupani told reporters after meeting villagers at Garal.

The chief minister said his government is committed to restore normalcy in the coastal belt at the earliest.

"I have asked the administration to restore electricity, water supply and repair roads by Sunday. If needed, we will bring in more manpower to speed up the restoration work," said Rupani.

The CM held a review meeting with local officials in Gir-Somnath district and took stock of the damage and ongoing relief work.

He informed reporters in Amreli that vehicle-mounted power generator sets have been deployed at several places to ensure uninterrupted electricity supply in some of the affected villages.

19 dead due to Tauktae in Maharashtra

Cyclone Tauktae claimed a total of 19 lives in Maharashtra while 37 persons were injured in cyclone-related incidents, the state disaster management authority said on Thursday evening.

Deaths were reported from seven districts, it said in a report.

The cyclone, which made landfall in Gujarat on Monday night after passing along the western coast of the country, affected 10 districts in Maharashtra.

Two people died in the coastal Ratnagiri district when an electric wire snapped and fell on them, while two died in tree fall incidents in Jalgaon district of north Maharashtra, it said.

The cause of death in other cases was not specified.

Raigad and Sindhudurg districts reported four deaths each, Thane and Palghar districts three each while Mumbai reported one death. All these are coastal districts.

Eleven cattle were also killed in the cyclone in Maharashtra, the report said.

A total of 13,425 people were evacuated to safer places.

Raigad, south of Mumbai, has emerged as worst-hit district in the state.

Over 8,400 people had to be evacuated while 6,092 structures were partially damaged in the district.

In Sindhudurg district, which borders on Goa, 53 structures were completely damaged, highest in the state. 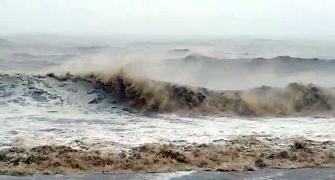 Cyclone forms in Bay of Bengal, may hit Bengal-Odisha 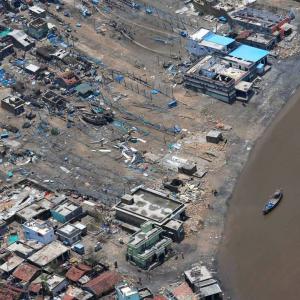 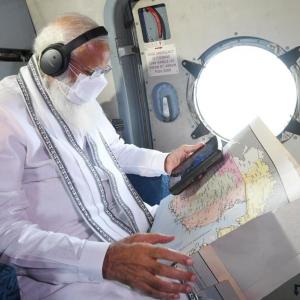 PIX: PM does aerial survey of Tauktae's damage in Guj