The Congress Working Committee on Saturday accused the central government of "colossal mismanagement" in the war against the COVID pandemic and cautioned of an "unprecedented catastrophe" unless urgent corrective measures are taken. 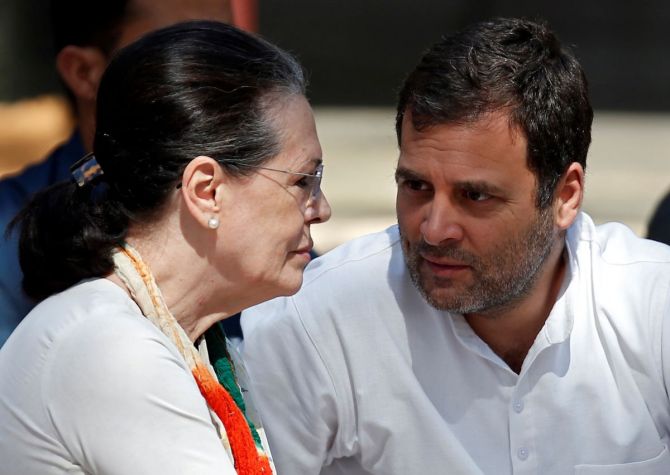 The highest decision-making body of the Congress, chaired by party chief Sonia Gandhi, met here virtually to discuss the COVID-19 situation in the country and suggest measures to the government to tackle the crisis.

Addressing a press conference after the meet that lasted over two-and-a-half hours, Congress' senior spokesperson P Chidambaram said concrete suggestions made by CWC members would be sent to Prime Minister Narendra Modi through a letter by former prime minister Manmohan Singh.

"We regret to say that the nation is paying a very heavy price for the thoughtlessness and unpreparedness of the NDA government to tackle the gravest disaster that has hit the country and has affected millions of families claiming 1,75,673 lives so far," it said.

The working committee meeting, attended by Manmohan Singh and former Congress chief Rahul Gandhi, besides general secretaries and other senior leaders, said it is a shame that the country with the world's largest vaccine manufacturing capacity has earned the odium of being among the most affected countries in the world.

"With a heavy heart, we caution the people that unless urgent corrective measures are taken the nation faces an unprecedented catastrophe. May wisdom prevail," the CWC statement said.

Chidambaram said several Congress leaders including Sonia Gandhi, Manmohan Singh and Rahul Gandhi have made valuable suggestions on how to tackle the situation. All of them would be collated by tomorrow and sent to the central government.

The CWC alleged that that the government failed to create sufficient public awareness that a waning pandemic could be a precursor to a second wave that may be more devastating than the first wave.

It also alleged that the Centre failed to rapidly scale up the production and supply of the two approved vaccines in India by providing sufficient funds and other concessions.

"The government failed to universalise vaccination after health workers and front line workers had been vaccinated in Phase I.

"It failed to get rid of pre-registration and bureaucratic control over the vaccination programme," the statement alleged.

The Congress also faulted the government for not leaving the vaccine roll-out to state governments and over vaccine wastage. "It failed to maintain the scale and momentum of testing, tracking and tracing of infected persons and their contacts," the CWC said.

"The government also failed to adopt a need-based, fair and equitable allocation of the vaccine doses to the various states," it said, claiming that official data shows that several states governed by Opposition political parties "got less than their fair share despite their need".

Chidambaram expressed the hope that the prime minister would take note and implement some suggestions made by Congress leaders.

"The CWC statement is an indictment of the government. We have indicted the government on the way it has handled the pandemic," he told reporters.

Charging the prime minister with callousness for addressing election rallies in West Bengal, Chidambaram said he should instead be doing his job of handling the pandemic while being at his desk in Delhi.

He urged the people of West Bengal to give a befitting reply to him.

AICC general secretary Ajay Maken said the prime minister should have been in Delhi instead of doing politics in West Bengal.

The CWC has asked the Congress workers to help the poor and save the lives of people. It has also asked the state units to set up helplines and control rooms to help the needy who are suffering.

Chidambaram also accused the government of "criminal negligence", saying its handling is causing devastation and deaths by negligence.

Asked whether he would favour a nationwide lockdown, he said it was for the prime minister to take a call on this.

"The way the states are moving, it seems each state is moving towards a near lockdown. The economy is in dire straits," he noted.

The former finance minister said India ended 2020-21 with a negative growth of 10 pc and there is no revival amid the highest inflation and unemployment rate, growing joblessness.

"Every indicator is negative, it is certainly not positive...We are in dire straits. In a lockdown, the situation will worsen," he said, adding that one does not wish a lockdown as it will push revival further down by another six months.

On PM's comments on the Kumbh, he said, "This is again locking the stable after the horses have bolted".