Curfew was re-imposed on Sunday in Srinagar and other major towns of the Kashmir Valley, where the death toll in the ongoing unrest has risen to 102 with three more persons, including a youth leader of opposition PDP, succumbing to injuries.

Najar was injured in the security forces firing on Saturday when he was allegedly leading a mob that attacked the residence of SP leader Fayaz Ahmad Bhat at Khanabal during the funeral procession of a youth who had drowned last week.

Curfew was re-imposed in Srinagar and all major towns of the Valley on Sunday notwithstanding the separatists' decision to exempt the day from protests and strikes.

Hardline Hurriyat leader Syed Ali Shah Geelani, who has been issuing weekly agitation calendars, had exempted the day from protests and strikes, and asked people to carry out their normal activities.

The spokesman said the law and order situation in curfew-bound areas was by and large peaceful.

"No untoward incident has been reported from anywhere so far," he said.

Besides Srinagar city, curfew remained in force within the jurisdiction of police station Budgam, Chadoora, and Charar-i-Sharief in Budgam district, Ganderbal district town and adjoining Kangan.

Meanwhile, the spokesman said security forces complying with the orders of the respective district magistrates of the Valley have imposed restrictions under section 144 CrPC to bring the situation under control, minimise causalities.

Police has given instructions to all station house officers to ensure that essential medicines and commodities are made available to the people in curfew-bound areas, the spokesman said.

Kashmir Valley has been in the grip of violent protests since June 11, when 17-year-old boy Tufail Ahmad Mattoo was killed in tear smoke shelling by police at Rajouri Kadal of the city. 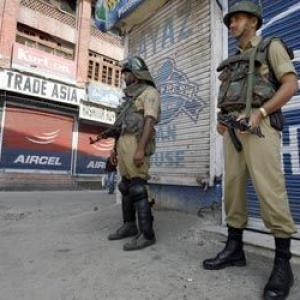