In the wake of heightened tension and violence, parts of Manipur capital Imphal were on Sunday brought under indefinite curfew and mobile internet services were snapped at various places to prevent spread of rumours over an alleged attack on a church. 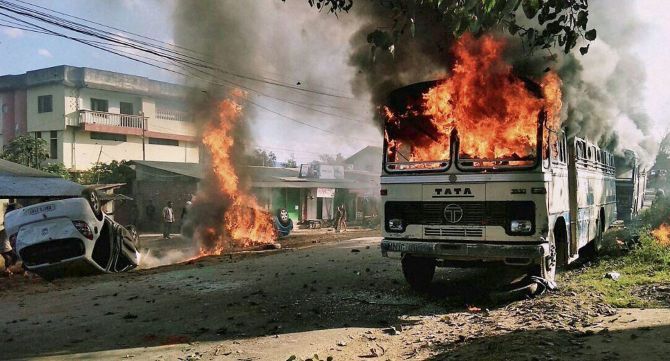 The curfew was imposed and covers Porompat and Sawombung subdivisions of Imphal East district, said an order issued by the district magistrate. It will continue till further directions.

Earlier in the day, the state Cabinet decided to shut down mobile internet services in Imphal West district with immediate effect, taking serious note on the prevailing situation following three blasts on Friday.

The action came in the wake of tensions following Friday's blasts and an alleged attack on a church.

Major areas of the state capital fall in Imphal West district where the three blasts had taken place within an hour on Friday evening.

The Cabinet decision came after analysis of the prevailing law and order situation and to halt spreading of rumours through social networking sites, officials said.

The move was preceded by a 24-hour bandh called to protest hill based militants' attacks on Manipur Police in the last few days in different parts of the state that left three policemen dead and 14 others injured. The militants also snatched several weapons from the Indian Reserve Battalion personnel.

All measures were being taken to contain violence by deploying a large number of police personnel at sensitive areas of the state, a police officer said.

The capital today saw violence by protesters who were agitating against the ongoing economic blockade in the state and a series of terrorist attacks. A number of vehicles were set on fire or vandalised.

The landlocked state has been experiencing severe hardship in supply of essential items since November 1 after United Naga Council imposed an indefinite economic blockade on the two national highways that serve as lifeline for the state.

The blockade was imposed following the state government's announcement of formation of seven new districts, four of which have been formally inaugurated.

Tension in the state heightened after suspected militants continued their violent attacks on Manipur Police and other state forces in the last few days that left three policemen dead and 14 others injured last Thursday.

The attack was followed by triple bomb blasts at Nagaram area in Imphal West district allegedly by Manipur Naga People's Front on Friday.

In another incident, suspected militants overpowered a small outpost of IRB at Nungkao area on Saturday in Tamenglong district and fled with nine service weapons.