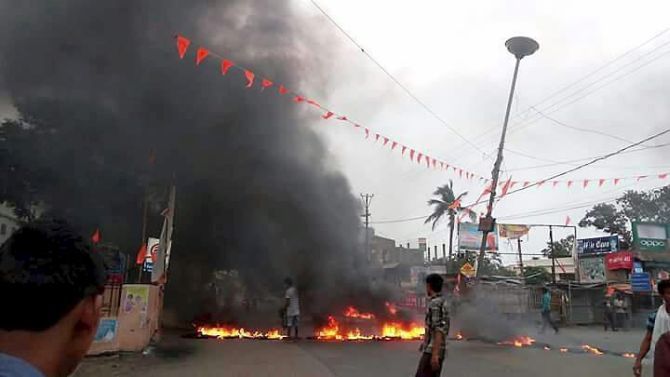 Security men on Saturday staged a flag march in curfew-bound Bhadrak town of Odisha even as the central forces were on their way to the area, which had witnessed violence triggered by ‘abusive’ remarks against Hindu deities.

The curfew, clamped in the arson-hit town on Friday, would continue till Sunday, while the prohibitory orders under section 144 of CrPC were imposed in nearby Dhamnagar and Basudevpur as a precautionary measure to prevent spread of violence, a police official said.

Additional forces, including armed police, were deployed as part of an effort to restore peace in the strife-torn town which witnessed violence on Thursday and Friday, he said.

Senior officials, including Home Secretary Asit Tripathy and Director-General of Police K B Singh, have been camping in Bhadrak to monitor and supervise the peace operation.

The DGP said the situation was now under control after some violent incidents took place in the town on Friday, but there was no group clash and loss of life.

Chief Secretary A P Padhi said in Bhubaneswar on Saturday that no violence had taken place in Bhadrak, where 35 platoons of force (over 1,100 personnel) had been deployed.

Two companies of central forces are being sent to Bhadrak as the Union government is ready to extend all help and cooperation to the state in restoring normalcy in the town, Union Minister Pradhan said in a statement.

Stating that he had a word with Union Home Minister Rajnath Singh and the Home secretary on the issue, Pradhan urged Odisha Chief Minister Naveen Patnaik to handle the situation in a sensitive manner and activate the administration.

About 30 people have been detained in connection with the violent incidents which left several shops gutted and vehicles damaged.

All entry and exit points of the town have been sealed, police said.

Violence had erupted in Bhadrak on Thursday after a group staged demonstration near the town police station demanding immediate arrest of those involved in posting alleged offensive remarks against Hindu deities on social media.

Though the district administration clamped prohibitory orders, tension persisted and fresh violence erupted on Friday after a peace meeting called by the administration to restore normalcy failed to yield results.

The state government has appointed Gyanaranjan Das, who was the commissioner of Cuttack municipal corporation, as Bhadrak Collector.

Union Minister of State for Social Justice and Empowerment Krishan Pal Gurjar, who was scheduled to attend a function on Saturday cancelled his visit, while slamming the state government for unrest in the town.

Bharatiya Janata Party leaders, including the party’s Odisha unit president, Basant Panda and former MLA Pratap Sarangi slammed the Biju Janata Dal-led state government for arson in Bhadrak, adding that it was ironical that the chief minister was camping in Delhi at a time when the town was burning.