For 2nd year, Thrissur Pooram to be held without people's participation

Kerala's iconic Thrissur Pooram, considered as the festival of festivals in the state, will be held this week without people's participation, considering the surge in Covid-19 cases in the southern state, officials said Thrissur on Tuesday. A decision in this regard was taken by the state government on Monday.

A meeting of Paramekkavu and Thiruvambady Devaswom officials -- the two major organisers of Pooram festival -- convened by Thrissur district collector in the temple town on Tuesday agreed to organise the festival without spectators.

The meeting decided to limit this year's pooram festival to the ritual, officials said.

"The public will not be allowed to enter the venue of the festival. The entry will be restricted only to those who are associated with the Pooram rituals.

"However, the passes will be issued only to those participants who produce either RT-PCR negative certificates secured in 72 hours or certificates of taking two doses of vaccination against Covid," the Thrissur district administration said.

Although Paramekkavu Devaswom decided to scale down the Pooram celebrations to be held on April 23, they will parade 15 elephants for the festival and organise the famous Ilanjithara Melam, an assembly of percussion performance artistes held under the Ilanji tree at the courtyard of the Vadakkunnathan temple.

Thiruvambady Devswom said they will hold mere rituals as part of Pooram and only one elephant will be paraded from their side, considering the super spread of Covid-19 in the district.

District authorities said "kudamattam or exchange of decorated umbrellas, which is one of the iconic events during the Pooram, will be held symbolically."

The Devaswoms will organise Pooram fireworks in a controlled manner, they said.

The 'khadaka Pooram (small pooram)’ from nearby temples will be carried out as per custom, officials said.

Meanwhile, the police said no business, barring medical shops, will be allowed in and around the Swaraj Round in Thrissur city on Pooram day.

The police also decided to restrict vehicular movement in Thrissur city on April 23 and 24.

Last year also, the Pooram festival was held in a low key manner amid Covid-19 lockdown curbs with just a handful of people and inevitable rituals held inside the famous Vadakkunnathan temple.

Thrissur Pooram is known for the parade of richly caparisoned jumbos, performance of traditional music ensembles, fireworks and a sea of cheering people.

Pooram is an annual event held at the sprawling Thekkinkadu Maidan in Thrissur city on the Pooram asterism in the Malayalam month of Medam.

The two-centuries-old Thrissur Pooram had its origin in 1798, through a royal edict of the then Raja Rama Varma, popularly known as Shakthan Thampuran, a powerful ruler of the erstwhile princely state of Cochin.

The edict entrusted two local temples – Paramekkavu and Thiruvambady -- as the main sponsors of the festivities to be conducted in a competitive spirit.

Besides the main Poorams by the two devaswoms, small Poorams from nearby temples also participate in the festivities, ending with the fireworks display. PIX: Did you see the elephant parade in Mumbai? 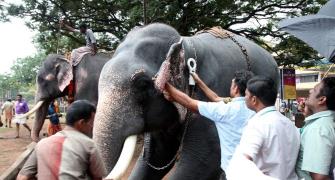 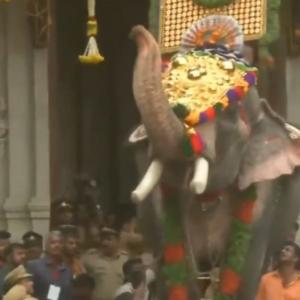