COVID-19 cases are being increasingly reported from small towns and rural areas, indicating community transmission and the current strategy of "trace, test, isolate and treat" will not be of much benefit as the virus has already widely spread in many geographical areas, a group of public health experts claimed on Monday. 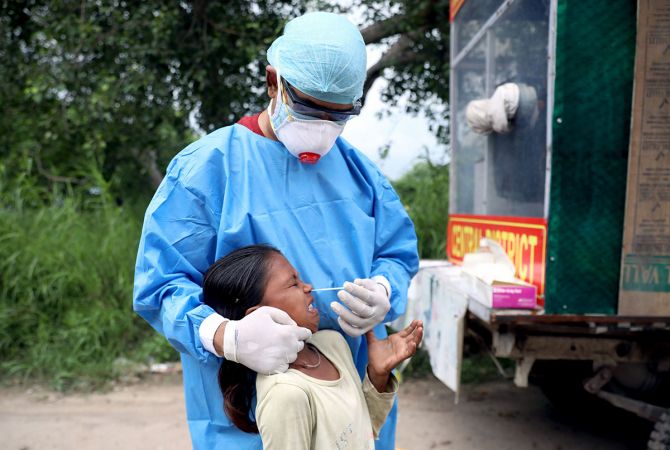 IMAGE: A health worker in personal protective equipment () collects a nasal sample from a girl for Covid-19 test at a health centre, amid the spread of the disease, in New Delhi . Photograph: Prabhat Mehrotra/ANI Photo

The sero-surveillance reports from various parts of India indicate that through the current strategy of "trace, test, isolate and treat" less than five per cent of the total estimated SARS CoV-2 infections were detected, experts, including doctors from AIIMS and Indian Council of Medical Research National Task Force on COVID-19, said while highlighting the need to relook at the testing strategy.

The experts, in a joint statement, said the presence of a large number of asymptomatic cases in all states and UTs further compounds the problem of early detection as the current testing strategy does not allow for testing of asymptomatic persons unless they are close contacts of a diagnosed case.

The strategy of "trace, test, isolate, treat" focusing on early identification of the cases to limit their transmission to others and also for effective clinical management is helpful when the epidemic is at its very early stage to avoid its foothold in the community, they said.

"Since the virus has already widely spread in the community in many geographical areas, the current strategy would not serve the intended objectives," the group of experts claimed.

Moreover, confirmed cases represent only a fraction of the total estimated cases as is indicated by sero-surveillance surveys. Hence, a greater number of tests being carried out will yield a greater number of detected cases without any benefit in reducing the deaths which should be the primary goal, the experts said in the statement.

"Increasingly, COVID-19 positive persons are being reported from small-sized towns, as well as from rural areas. Sero- surveys have revealed that the disease has spread to most parts of the country indicating community transmission of COVID-19," the statement said.

The experts said there is a need to relook at the testing strategy in a way that it results in guiding the public health response and effectively limiting the spread of the disease.

"Universal scaling up of testing at the current community transmission stage of the pandemic may not be an optimal control strategy and will divert attention and resources from control measures," they said in the statement.

"With the availability of sufficient understanding of the natural history of disease and at-risk population, testing should be used with due diligence. Targeted testing of high-risk individuals, healthcare workers, elderly with comorbidities, screening prior to surgical procedure etc is recommended," they said.

However, areas in the very early phase of pandemic (where zero or very few cases have been reported) testing may be used as a surveillance tool, they said.

The experts expressed concerned that even after six months of the disease which is increasingly spreading to small towns and rural areas, reports of stigma, fears and discrimination continue.

"The practice of pasting a notice on doors of home 9 isolated corona patients has led to stigma and discrimination. In response, many patients left home for unknown destinations, defeating the very purpose of isolation. Of particular concern has been the issue of the dignity of death and cremations and burials of COVID-19 victims," they said.

They stressed that no disease outbreak can be controlled without optimal community participation, and coercive measures nearly always are counter-productive over a long period.

Suggesting testing strategy, the experts said cities and towns with high caseload should consider all symptomatic COVID-19 cases and treat them at home or hospital depending on the clinical condition, as COVID-19 even without testing (syndromic approach), monitor symptomatic patients (even without testing), through phone, family members, and paramedics.

For towns and districts with low caseload, the experts suggested to continue the practice of containment zones, identify the case and contain that area, conduct house-to-house survey, identify cases through testing, isolate all those cases preferably at some facility to avoid further spread or home quarantine if possible with strict instruction so that spread can be stopped.

For towns and districts with no caseload, the group recommended continuing surveillance activity and precautions, actively promoting physical distancing, mask use and hand hygiene.

It said the experience from other countries indicates that increased testing does not prevent the deaths from COVID-19.

"Few countries like Japan, Sri Lanka with the lowest testing rates have lowest fatality due to COVID-19. There is evidence from other countries too that the present testing strategies are unable to contain deaths and transmission of SARS-CoV-2," the statement said.

The group of experts said that it's time now to move towards normalcy and opening of school and other educational institutions could be started in a graded manner.

Recommending quarantine and isolation policy, the experts said they should be community friendly. 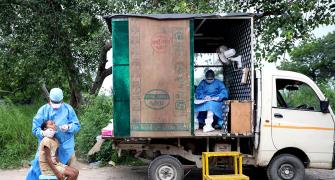 We should have control over Covid by Diwali: Vardhan 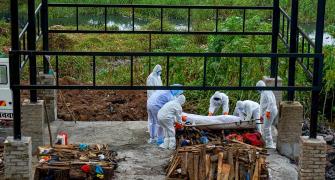 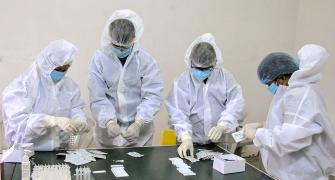 Treat docs dying of Covid as martyrs: IMA to PM 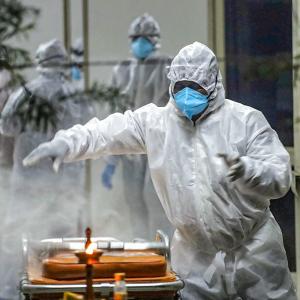 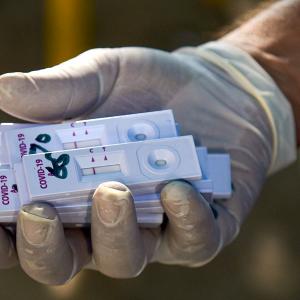