Court witnesses strength of faith in a murder trial 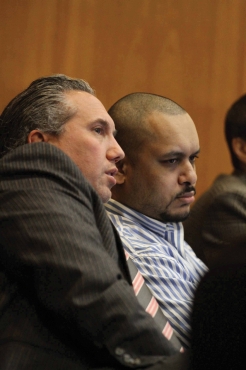 Joseph Mathai Pallipurath looks around quite a bit during the murder trial going on in a court room in Patterson, New Jersey. He looks stoically at the exhibits displayed for the jury. Occasionally, he looks at the ceiling and smiles, and turns to the jurors for a second or two.

But he will not look at the members of his victims' families -- sitting a few feet away and somberly watching the proceeding. Six of them come to the court two times a week for the trial which began two weeks ago and could go on the for next three.

Though he could not stop from staring at the wheelchair-bound Sylvie Perincheril, the surviving victim of the St Thomas Syrian Orthodox Knanaya Church shooting in 2008, his eyes moved away quickly.

Pallipapurth's estranged wife Reshma James, 24, was living with Perincheril following what seemed like the definite ending of her one-year-old marriage. She had told family she would never go back to her husband because he was too angry and possessive. He allegedly shot James, Perincheril, and parishioner Dennis John Malloosseril, 25, in a span of two or three minutes.

Perincheril, nearly 50, speaks slowly in the court room and is asked by Judge Salem Ahto to speak louder. The court records show Perincheril, after identifying the defendant, also said she felt sorry for Pallipurath. She hardly knew him and was seeing him for the first time after the shooting. Family members said she found it difficult to look at him and identify him.

Family members say she draws strength from her religious convictions.

Pallipurath is charged with James's and Malloosseril's murders, and the attempted murder of Perincheril. Though Pallipurath told the authorities on tape how angry he was on the day of shooting, his defence argued to the contrary.

"I swear if I had a (expletive) machine gun I would have killed everybody," according to the tape. "I would have massacred the whole (expletive) church. That's how much anger I had."

Last week, his attorney said, "Whatever happened on that terrible day was not the result his intention to kill or seriously injure anyone at that church. Mr Pallipurath certainly was in possession of a weapon."

Perincheril, who was in a coma for 16 days, and in hospital for weeks, had to undergo intensive rehab. She had worked for years for the Passaic Board of Education. The mother of three, who also taught religious classes at the church, said she has not gone back to work since the shooting. She remained acutely tense, but her son, who accompanied her to court, said she felt duty-bound.

"It's tough but, you know, friends, family and a lot of prayers are keeping my mom going," Jacob Perincheril was heard saying to CBS News. "God pulled her through for us and she came here today to do what she needed to do."

Witness Bobby Chacko remembered in court that he saw the defendant grabbing James by the hand and pulling her toward a church door.

Pallipurath had driven from Sacramento, California, to the church on November 23, 2008. Many in the church, which served solely the Malayali Syriac community, did not realise what was happening. When Pallipurath pulled out a gun, Chacko thought it was a toy gun.

"He pointed it at Reshma James," Chacko told the court. "He fired the gun at Reshma.  As soon as I heard that the pistol went off, I obviously knew it wasn't a toy gun."

Pallipurath, 29, who has severely cut his hair, but has a day's growth of hair on his face and a trimmed moustache, is reportedly indigent; some of his family members have paid a small amount for his defence.

A few weeks after his arrest -- he had dumped his jeep and fled by Greyhound bus to a small town in Georgia -- he took a potentially lethal dose of prescription and nonprescription medications, including aspirin, that he had been hoarding, William Maer, a spokesman for the Passaic County sheriff's office, told the media.

Earlier Judge Donald Volkert, noting the defendant would 'undeniably' spend life in prison if convicted, ordered a $5 million bond, raising it from $2 million.

Members of the victims' families, who have attended the trial, said they have never heard Pallipurath say he was sorry for the killings and attempted murder.

Chacko should give PAC comments in writing: Joshi