Former Army Chief Gen V K Singh was ticked off by a Delhi court for filing separate application seeking permanent exemption from personal appearance before it in a criminal defamation case against him and warned of "stern action".

Metropolitan Magistrate Jay Thareja said Singh was increasing the work load of the court as he should have moved the plea for permanent exemption at the same time when the other four serving officials, also accused in the case, had filed similar applications.

"I will take a stern action against him (V K Singh). You are moving this application now. You should have filed it earlier along with the other accused.

"You are increasing my work. Now I would have to pass a separate order for this application (with a similar plea)," the judge told former Army chief's counsel.

The complainant had alleged that he was defamed by the Army through its press release issued on March 5 which accused him of offering a bribe of Rs 14 crore to the then Army chief to clear a deal of 600 trucks, a charge refuted by him.

The court asked the counsel for the complainant to file his reply on V K Singh's application on November 1.

The complainant, however, opposed non-appearance of all the five accused. 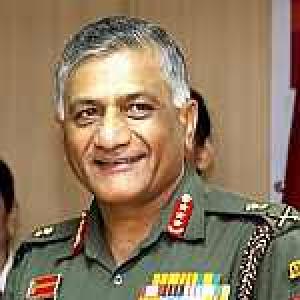