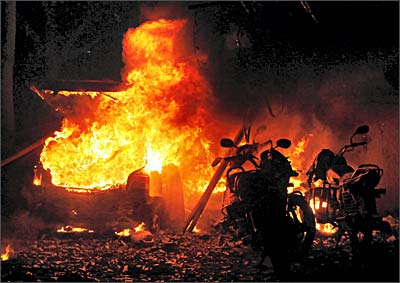 A special court in Ahmedabad on Tuesday convicted 49 persons in the case related to the 2008 Ahmedabad serial blasts which had claimed 56 lives and left over 200 injured.

In his verdict, which came 13 years after the deadly blasts, special judge A R Patel acquitted 28 accused, giving them the benefit of doubt.

The hearing on the quantum of punishment for the convicts will start from Wednesday, the court said.

Those who were held guilty included Safdar Nagori, Javed Ahmed and Atikur Rehman. Among those acquitted were Mohammad Irfan, Nasir Ahmad and Shakeel Ahmed.

One accused was also convicted under the Arms Act.

The accused were convicted under Indian Penal Code sections 302 (murder), 307 (attempt to murder), 121 (a) (conspiracy to wage war or attempt to wage war against the nation) and 124 (a) (sedition), and section 16(1)(a)(b) of the UAPA which concerns terrorist acts.

The convicts can attract a maximum punishment of death or imprisonment for life, and the prosecution will seek capital punishment for some of them, said special public prosecutor Amit Patel.

The prosecution argued before the court -- specially designated to conduct trial in the case -- that the blasts were an act of terrorism, he said, adding that as many as 547 charge sheets were filed and 1,163 witnesses examined.

"Twenty-eight other accused were acquitted by the court giving them the benefit of doubt. Details will be clear from the full judgement which we have not yet gone through," the prosecutor said.

Of 28 acquitted, all but six have one or more other cases pending against them or are already serving sentences in past cases including under the Maharashtra Control of Organized Crime Act and cases investigated by the NIA, Patel said.

Hence, only six out of 28 acquitted persons will be released from jail, he added.

Further, the trial of four other accused who were arrested later has not started and the prosecution has sought that they be tried jointly, Patel said.

Among those awaiting trial is Yasin Bhatkal, a leader of the terror organisation Indian Mujahideen (IM).

According to investigation agencies, the IM was involved in a string of bombings across the country including the 2008 Ahmedabad blasts.

Of 15 wanted accused, two died in police encounter in Azamgarh in Uttar Pradesh and one died in Kerala. A couple of accused are believed to be hiding in Pakistan.

Three of the acquitted accused were also booked for allegedly digging a tunnel under the Sabarmati jail here in a bid to escape which was foiled by the police in February 2013, Patel said.

The convicts are currently lodged in six jails across India, including 32 in Sabarmati Central Jail in Ahmedabad. Others are lodged in jails at Taloja (near Mumbai), Bengaluru, Jaipur, Gaya and Bhopal, officials said.

All 77 accused who were on trial were presented before the court via video conference on Tuesday. They will remain present in the same way during the hearing on quantum of sentence, prosecutor Patel said.

The trial against 77 accused ended in September 2021. When it began in December 2009, charges had been framed against 78 persons, but one of them turned approver and was granted pardon.

Twenty bombs went off in different areas of Ahmedabad city between 6.32 pm and 7.45 pm on July 26, 2008, killing 56 and injuring 246 others. As many as 29 live bombs were also found in Surat though none of them exploded.

The Gujarat government had transferred the investigation to the Ahmedabad crime branch.

Present Gujarat director general of police Ashish Bhatia, who was then joint commissioner of police, had supervised the probe.

A total of nine judges presided over the trial at different times, starting with Bela Trivedi in whose court charges were framed on February 15, 2010.

Special judge A R Patel who delivered the verdict had taken over the trial from June 14, 2017, prosecutor Patel said.

Police had claimed that members of the IM, a radicalized faction of the banned Students Islamic Movement of India (SIMI), were behind the blasts.

IM planned the blasts as a revenge for the 2002 post-Godhra riots in Gujarat in which over a thousand persons, most of them from the Muslim community, had died, as per the investigators.

For survivors, the blasts left permanent physical as well as psychological scars.

Yash Vyas was only 10 years old when he suffered severe burn injuries in the blast at a hospital ward in Asarva area.

"I am still suffering from partial hearing impairment because of the explosion. I spent nearly four months in the ICU while my father and elder brother Rohan, who was then 12 years old, died in the blast. I miss them. My mother and grandmother suffered a lot all these years and our struggle still continues," he said.

His father Dushyant Vyas was a lab technician in a cancer medical facility located on the civil hospital campus. On July 26, 2008, Dushyant had taken his two sons to an open ground of the hospital to teach them how to ride a bicycle.

"At around 7.30 pm, when my father saw some blast victims being brought in ambulances (following a blast in another area), he decided to help them. But, as soon as we reached near the civil hospital's trauma ward, an explosion occurred. My father and brother died on the spot," Yash said.

He said those involved in the serial blasts must be given capital punishment.

Pradip Parmar, currently a Gujarat minister who was also injured in the blast outside the trauma ward of the civil hospital, recalled seeing people with blood all over them, some people with burn injuries, and dismembered body parts lying scattered.

"Many people died on the spot. One of my legs was critically injured. The damage was nearly 90 per cent and doctors had even thought of amputating it to save my body from further infection. But, luckily they were able to save my leg," he said, lauding the doctors for their efforts.