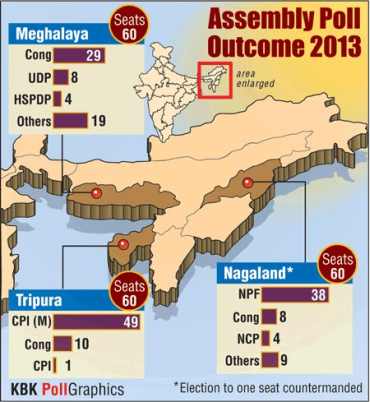 The Left Front retained its bastion Tripura while the Naga People's Front in Nagaland and Congress in Meghalaya are set to return to power in the northeast states where counting of votes was taken up on Thursday.

The ruling Left Front in Tripura on Thursday stormed back to power for the fifth consecutive term since 1993 getting a three-fourths majority for the second straight time in the assembly elections.

Inflicting a crushing blow on Congress and other opponents, the Left Front led by 64-year-old Chief Minister Manik Sarkar bagged 50 seats in a House of 60 increasing its tally by one from 49 in 2008 paving the way for installation of its government for the seventh time since 1967 when the first assembly polls were held. LF bagged 42 seats in 2003.

All ministers of the outgoing ministry except Science and Technology minister Joy Gobinda Debroy of RSP were re-elected.

LF's major partner CPI(M) bagged 49 of the 55 seats it contested with coalition partner CPI, which contested 2 seats, getting one, while the RSP which fought two seats and Forward Bloc in one, drew a blank.

The Congress which contested 48 seats managed to retain 10, while allies INPT which fought for 10 seats and National Conference of Tripura in one were unable to win even one seat. Congress Vice President Rahul Gandhi during his election campaign had asked voters to throw out the Left Front government from the state.

CPI(M) State Party Secretary Bijan Dhar said, "It is a victory of the people of the state, and a victory of peace and development and good governance of the sixth Left Front government." Leader of the Opposition Ratan lal Nath said, "We accept defeat and will review the causes for it."

Naga Peoples Front swept back to power in Nagaland on Thursday to form the government for the third consecutive time winning absolute majority by securing 38 of the total 60 seats.

The state party bettered its tally in the 12th Nagaland assembly by 12 seats against 26 it won last time. It had contested in all the seats.

Congress' electoral luck deserted it as the party could win only eight seats compared to the 18 it won last time.

NPF allies Janata Dal-United and Bharatiya Janata Party won a seat each. Nationalist Congress Party contested in 15 but won in four seats, while RJD failed to open its account though it entered the fray in two constituencies. Independents won 8 seats.

Elections were held in 59 of the total 60 seats following the death of Teunsang sadar Congress candidate P Chuba Chang a day before the February 23 polls.

Former Nagaland Home Minister and NPF candidate Imkong L Impchen, who resigned following his arrest for allegedly carrying over Rs 1 crore in cash, arms and ammunition besides liquor in his vehicle ahead of the assembly polls, defeats independent candidate T Chalukumba Ao by 5735 votes. Congress candidate for the seat Moatemjen forfeited his deposit after winning just 98 votes.

The Congress retained power in Meghalaya after emerging as the single largest party, bagging 29 seats, 2 short of an absolute majority, in the assembly election results that were declared today.

In the 2008 assembly election, the Congress had bagged 25 seats.

The results are a shot in the arm of Congress chief minister Mukul Sangma who faced stiff opposition from old warhorse P A Sangma who had quit Sharad Pawar's Nationalist Congress Party to form the National People's Party last year.

But NPP managed to bag only two seats, saving itself from the ignominy of getting wiped off the scene in the Garo Hills region, once considered the bastion of the former Lok Sabha speaker.

The NCP on the other hand won two seats with its incumbent deputy speaker Sanbor Shullai retaining his urban South Shillong constituency.

The United Democratic Party, which was the key ally of the Congress for the past three years in the Meghalaya United Alliance coalition government, could retain eight out of 11 seats it won in 2008.

His party colleague Ardent Basaiawmoit retained his Nongkrem seat in East Khasi Hills district and the party’s position improved by a whopping 50 per cent. The party won only two seats in 2008.

Thirteen Independent candidates also won from their constituencies, some of which are already camping with the Congress.

Mukul Sangma won from Ampati seat for the fifth time in a row, defeating his NPP rival Clement G Momin by over 9,000 votes.

Four women candidates who contested the election on Congress tickets won by a comfortable margin and created a history by having such a big representation in the House.

In 2008, Urban Affair Minister Ampareen Lyngdoh was the lone lady legislator who first won on UDP tickets and then retained her seat in the bye-election on a Congress ticket.

Among the prominent losers were UDP candidates and cabinet ministers B M Lanong who lost to Ampareen Lyngdoh and J A Lyngdoh who lost to Congress candidate Kennedy Khyriem.

Speaker in the outgoing Assembly Charles Pyngrope lost his seat to a UDP candidate Jemino Mawthoh from Nongthymmai constituency while his son, David Nongrum, who was denied Congress ticket from Mawryngkneng constituency won.

Source: PTI© Copyright 2020 PTI. All rights reserved. Republication or redistribution of PTI content, including by framing or similar means, is expressly prohibited without the prior written consent.
SHARE THIS STORY
Print this article
Why Manik Sarkar will come back to power again One of India's most politically unstable states goes to the polls Nagaland polls: Few criminals, many crorepatis fight it out 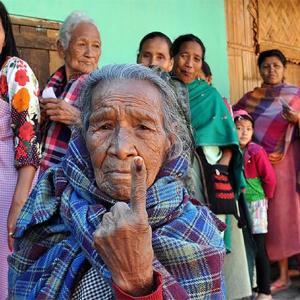