As the coronavirus death toll mounted to 425, India on Tuesday further tightened visa rules by cancelling the existing visas for Chinese and foreigners who had visited the country in the last two weeks. 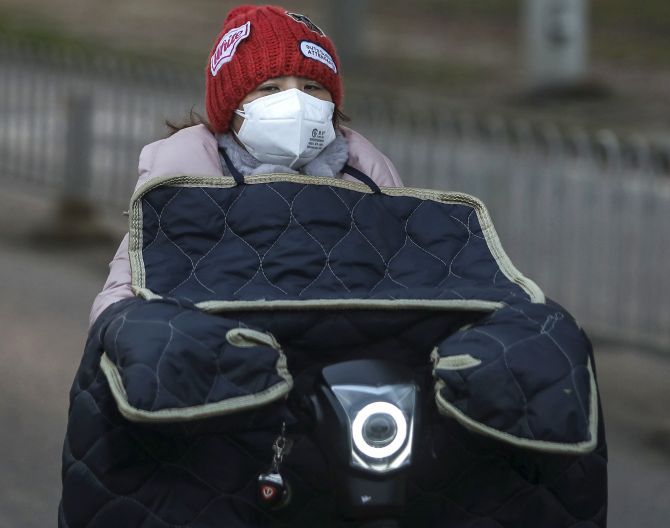 IMAGE: A woman wears a protective mask as she rides on a bicycle in Wuhan, Hubei province, China. Photograph: Getty Images

On February 2, India temporarily suspended e-visa facility for Chinese travellers and foreigners residing in China in view of the coronavirus outbreak in the central Chinese city of Wuhan.

The death toll in China's coronavirus rose sharply to 425 with 64 deaths on Monday and the number of those infected with the deadly disease rose to 20,438, Chinese health authorities said on Tuesday.

“All those who are already in India (with regular or e-visa) and had travelled from China after January 15 are requested to contact the hotline number of Ministry of Health and Family Welfare of Government of India (+91-11-23978046 and email: ncov2019@gmail.com,” the announcement by the Indian embassy said.

About the validity of the visas, it said the “Embassy of India and our consulates have been receiving several queries from Chinese citizens as well as other foreign nationals, who are based out of China or visited China in the last 2 weeks, as to whether they can use their valid single/multiple entry visas to travel to India.”

“It is clarified that existing visas are no longer valid. Intending visitors to India should contact the Indian Embassy in Beijing (visa.beijing@mea.gov.in) or the Consulates in Shanghai (Ccons.shanghai@mea.gov.in) and Guangzhou (Visa.guangzhou@mea.gov.in) to apply afresh for an Indian visa. Indian Visa Application Centres (www.blsindia-china.com) in these cities may also be contacted in this regard,” it said.

The visa section of the embassy/consulates of India in China can be contacted to ascertain the validity of visa before undertaking any visit to India, it said.

The deadly virus has spread to more than 25 countries, including India.

Additionally, Air India on Tuesday said it is suspending its Delhi-Hong Kong flight from February 8, hours after the authorities there confirmed the death of a patient with the new coronavirus.

"In view of the coronavirus issue Air India is suspending its flights to Hong Kong after flying AI314 on the 7th of February 2020," said Air India Chairman and Managing Director Ashwani Lohani on Twitter.

The deadly virus, which originated in China's Wuhan city, is rapidly spreading to other countries. Hong Kong on Tuesday reported the death of a patient being treated for the virus.

Earlier, IndiGo suspended all three flights between India and China.

K J M Varma
Source: PTI© Copyright 2021 PTI. All rights reserved. Republication or redistribution of PTI content, including by framing or similar means, is expressly prohibited without the prior written consent.
SHARE THIS STORY
Print this article
Life in virus-stricken 'ghost town' of China's Wuhan 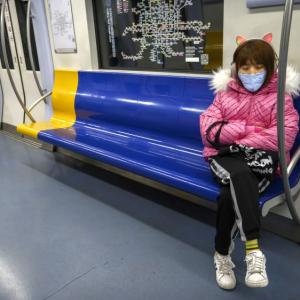