India briefs over 100 envoys on steps taken to contain coronavirus

India briefed the representatives of more than 130 countries and international organisations, including over 100 envoys, on Friday about the proactive steps taken by it to combat coronavirus.

At the briefing by senior officials from the Ministry of External Affairs, Ministry of Health and Family Welfare and the Ministry of Home Affairs, the envoys and representatives of international organisations were also provided clarifications related to government advisories.

'Together in this fight! Representatives of 130+ countries and international organisations, including 100 Heads of Mission, attended a briefing by senior officials from MEA, MOHFW and MHA on proactive steps taken by Government of India to combat COVID-19 pandemic and provide clarifications related to government advisory,' MEA spokesperson Raveesh Kumar tweeted.

The Centre and the states have ramped up their efforts to tackle novel coronavirus, which has claimed at least 4,600 lives globally and affected over 1,25,000 people.

Prime Minister Narendra Modi has asked the citizens not to panic and asserted that the government was fully vigilant.

Apart from directing the Union ministers not to travel abroad in the coming days, Modi also urged people to avoid non-essential travel, saying,"We can break the chain of spread and ensure safety of all by avoiding large gatherings."

The government has also suspended all visas, except a few categories such as diplomatic and employment, till April 15. 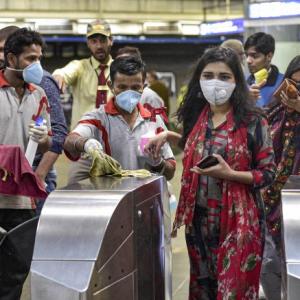