The Centre estimates to receive and utilise 40-50 crore doses of COVID-19 vaccine covering 20-25 crore people by July next year and it is preparing a format for the states to submit by October-end their list of priority population group to receive the vaccine, Union Health Minister Harsh Vardhan said on Sunday. 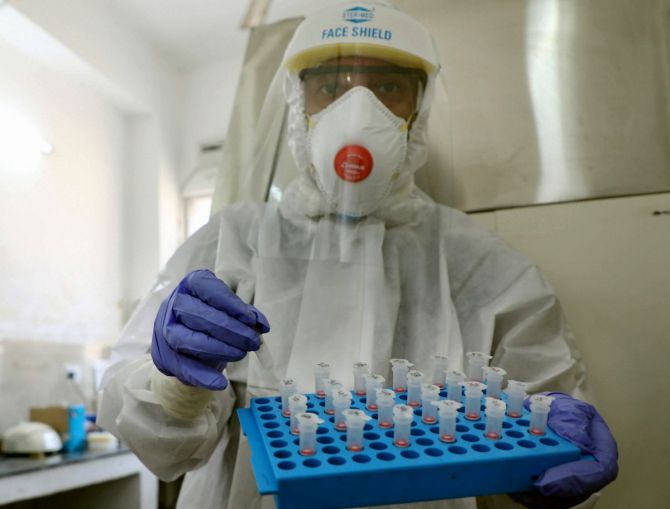 He said priority would be given to health workers engaged in COVID-19 management in getting the vaccine.

During an interaction with his social media followers on 'Sunday Samvad' platform, he said a high-level expert group is going into all the aspects of vaccines and the health ministry is preparing a format in which states will submit lists of priority population groups.

The list of frontline health workers will include both government as well as private-sector doctors, nurses, paramedics, sanitary staff, ASHA workers, surveillance officers and many other occupational categories who are involved in tracing, testing and treatment of patients.

This exercise is targeted to be completed by the end of this October and the states are being closely guided to also submit details about cold chain facilities and other related infrastructure which will be required down to the block level, the minister said.

"The Centre is also working on plans for building capacities in human resources, training, supervision and others on a massive scale and roughly estimates to receive and utilise 400-500 million doses covering approximately 20-25 crore people by July 2021.

"All this is under various stages of finalisation," Vardhan said.

He further informed his audience that the government is also keeping an eye on immunity data concerning COVID-19 disease while finalising these plans.

"Our government is working round the clock to ensure that there is a fair and equitable distribution of vaccines, once they are ready. Our utmost priority is how to ensure a vaccine for each and everybody in the country," Vardhan said.

The minister stated that a high-level committee under the chairmanship of Niti Aayog Member (Health) Dr V K Paul is drawing up the entire process.

Vaccine procurement is being done centrally and each consignment will be tracked real-time until delivery to ensure it reaches those who need it most, he said.

The Union health minister added the panel is working on understanding the timelines of availability of various vaccines in the country, obtaining commitments from vaccine manufacturers to make available maximum number of doses for India inventory and supply chain management and also on prioritisation of high-risk groups.

"This is a work in progress which will be completed by the time the vaccines are ready to ensure the swift roll-out of an immunisation programme."

Assuring a social media follower that there would be no diversion or black-marketing of the vaccine, Vardhan said, "Vaccines will be distributed as per pre-decided priority and in a programmed manner.

"To ensure transparency and accountability, details of the entire process will be shared in the coming months."

He stressed on the need to prioritise healthcare workers and adults or those who have underlying health conditions.

To a question regarding the phase-three clinical trial of Russia's 'Sputnik-V' vaccine in India, Vardhan clarified that the matter was still under consideration, and no decision has been taken yet.

To another question, he replied it is not possible to comment on the superiority of one vaccine over the other, but said, "Even if we have multiple vaccines available, they will all be safe and will elicit the requisite immune response against novel coronavirus."

He said that all vaccines that have proven to be safe, immunogenic and efficacious in clinical trials outside India need to undergo bridging studies to prove their safety and immunogenicity in the Indian population as well, although these studies can be conducted with much smaller sample size and end quickly.