Delhi Police has detained 200 people in connection with the violence that broke out in various parts of the national capital during the farmers' tractor rally in the city on Tuesday. IMAGE: Farmers stand next to an overturned tractor at ITO during their Kisan Gantantra Parade to protest against Centre's farm reform laws in New Delhi. Photograph: Ravi Choudhary/PTI Photo

In a statement, the Delhi Police on Wednesday said that the "detained persons will be arrested soon."

A total of 22 FIRs have been registered regarding the violence in which over 300 police personnel were injured.

A day after vandalism in the Red Fort premises by the agitating farmers during the tractor rally, Union Tourism Minister Prahlad Patel along with police and other officials visited the incident spot where broken shards of glass, scattered pieces of paper, vandalised ticket counter, metal detector gate, and police caps could be seen.

In its FIR, the Delhi Police stated that six Delhi Transport Corporation buses and five police vehicles were damaged in the violence that broke out at ITO during the farmers' tractor parade.

It also claimed that several police personnel were injured and 70 iron barricades damaged when over 10,000 protesting farmers on nearly 600 tractors stormed the area.

The Delhi Police stated the protesters tried to enter Luytens' Delhi from Tilak Bridge despite not given permission to hold the tractor parade in the jurisdiction of IP Estate Police station where the first information report was registered.

According to the FIR, the farmers smashed the barricades and hit DTC buses stationed at ITO with their tractors and also tried to run over police personnel. 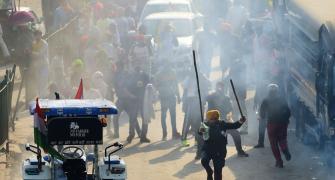 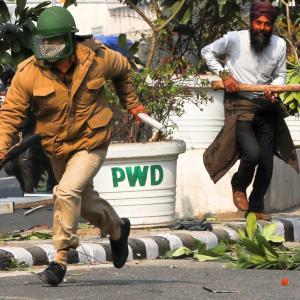