Congress plenary was a platform to project Rahul Gandhi

The two-day Congress plenary session in New Delhi, which met following weeks of turmoil in the Congress had less of introspection on corruption and crises, and more of the general Congress agenda: Promote Rahul Gandhi, project him as a mature leader who has taken the next step towards leading the nation and bash the Bharatiya Janata Party.

"The mood in the Congress in the recent weeks was that of gloom. The assembly election reverses and the numerous corruption scandals had demoralised the workers. Especially since there are important state elections in April 2011, the party had to rejuvenate the rank and file. The plenary was a perfect opportunity for that," said an All India Congress Committee member from Tamil Nadu.

This is the reason there were many mentions of paying attention to the workers and strengthening the grassroots in both Prime Minister Manmohan Singh's and party president Sonia Gandhi's speeches.

Now the workers will go back with a spring in their steps and that positive effect is bound to percolate to the lower levels, he said.

"About 10,000 people will go from here and they will spread the message further. By the time elections come, the party workers will be ready for the campaigning," he said.

Another reason behind the plenary was to introduce Rahul Gandhi as the leader to the rank and file from across the country, which will not get a chance to interact with him till 2014, when the party hopes to retain power.

"It was basically to showcase to the middle and lower levels of the party Rahul Gandhi as the next leader who will lead them into the future," said a veteran Congress-watcher. "Earlier Sonia Gandhi would be the top-billed speaker, followed by other important party leaders. This time, Rahul overshadowed the other senior leaders."

Rahul Gandhi, who earlier used to restrict himself to issues like youth and technology, this time, spoke on a gamut of national and party issues.

"He even had a word of advice to the ministers and chief ministers, who are all elder

and more senior in the party. That is a clear sign that he is moving to the next level. From being under the wings of senior leaders to becoming their leader," he said.

But the standout aspect of the plenary was the Congress's frontal attack on the Rashtriya Swayamsevak Sangh and the Bharatiya Janata Party. The attack comes days after leaked US embassy cables revealed that Rahul Gandhi told the US ambassador that he believed that terrorism suspected to emanate from fringe Hindu outfits was a far bigger threat to the country than terror emanating from outfits like the Lashkar-e-Tayiba.

The party resolution called for a probe into RSS's alleged links with terrorism, and Sonia and the PM both criticized the BJP.

"The Congress and the RSS have been historically at loggerheads based on their ideology," the observer said. "The Congress now senses it has a chance to go for the kill against the RSS and is capitalising on it."

Observers said the Congress might also be doing this with one eye on the upcoming assembly elections.

"Assam, which is one of the five states that goes to polls next year, has a 30 percent minority population," said a journalist who has covered the party for more than a decade. "West Bengal is also going to polls. The Congress will see how this line of attack goes down with the voting public. By launching this attack on the RSS, it is trying to test the waters early so that it can recalibrate its strategy in 2014."

What intrigued observers was the fact that the most stinging attack came from Digvijay Singh, who equated the RSS with the Nazis.

"The one who went ballistic was Digvijay because he can be delinked from the Gandhi family," he said. "If this strategy does not pay off, or worse, backfires, then the Congress can retract the line, and the Gandhi family would not be involved in this."

Thus, the party, instead of using an opportunity to look in, has gone and expanded on its regular themes, and instead of setting its house in order, is taking the battle to the opposition. 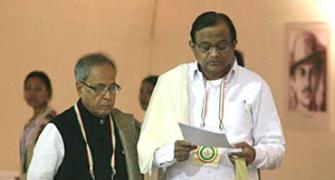 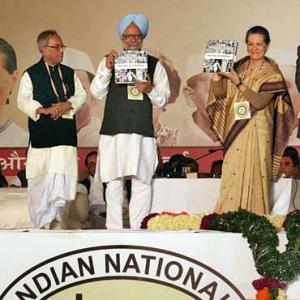