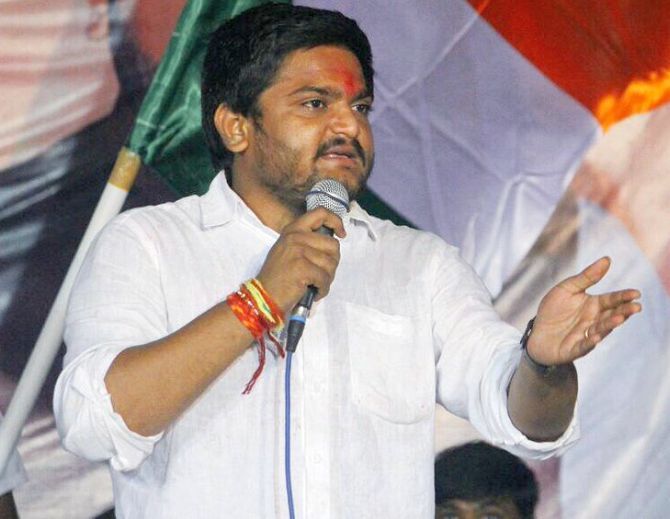 The Congress on Sunday night released its first list of 77 candidates in which sitting MLA Indranil Rajyaguru of Rajkot East seat has been fielded to fight against Bharatiya Janata Party Chief Minister Vijay Rupani from Rajkot West seat.

However, after the list was released, Patidar Anamat Andolan Samiti members expressed anger and started protesting in many parts of the state, claiming they were not given proper representation.

Two PAAS members were given tickets in the released list, while the Hardik Patel-led organisation had demanded 20 seats.

Around 20 other Patel candidates, who are not members of the PAAS, also find mention in the list.

The two who have been given tickets are Lalit Vasoya from Dhoraji and Amit Thummar from Junagadh seat.

In Surat, PAAS members ghearoed the city unit office late on Sunday night and indulged in sloganeering against the Congress.

Some agitated protesters clashed with Congress workers, and allegedly vandalised the party's office.

"Our community members have not been given proper representation in the list that has been declared. We will not allow any Congress office to function in the state," Surat city PAAS convenor Dharmik Malaviya told reporters.

In Ahmedabad, PAAS convenor Dinesh Bhambania, with his supporters reached the house of state Congress chief Bharatsinh Solanki to represent their case.

"We will organise protest in front of every office of the Congress across the state. Bharatsinh Solanki should talk to us," he said.

However, Solanki was not present at his Ahmedabad residence.

"The Congress has given tickets to two of our members without taking us into confidence. Other Patel candidates that they have selected are bogus. We will hold a massive protests against Congress tomorrow (Monday)," another PAAS convenor Alpesh Kathiria said.

Earlier in the day, PAAS mebers led by Bhambania and Kahiria had met Solanki and other Congress leaders.

After the meeting it was declared that they had reached a compromise formula.

Sources in the party had earlier said that the PAAS was demanding around 20 seats and negotiations were on between the PAAS and Congress on seat sharing.

Meanwhile, senior leader Shaktisinh Gohil who is MLA from Abdasa of Kutch has been fielded from Mandvi.

Gohil's chance of being a chief ministerial candidate brightened after Solanki said that he would not contest polls.

Party has fielded another senior leader Arjun Modhvaida from Porbandar seat which he had lost last time in 2012.

The party has given tickets to all its sitting MLAs on the seats where names were released.

The party has fielded four former MPs in the list of 77 for the first phase of the election scheduled on December 9, showing that it gives importance to the state assembly elections.

It has fielded Kunverjai Bavaliya from Jasdan seat, Soma Patel from Limbdi, Tushar Chaudhary from Mahua ST and Virji Thummer from Lathi seats.

The Congress has also given tickets to three members of minority community in the list--Suleman Patel from Vagra, Iqubal Patel from Surat (West) and Mohammed Javed Pirzadda from Vankaner.

Of the total 182 assembly segments in the state, 89 seats will go to poll in the first phase. 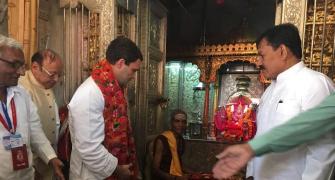 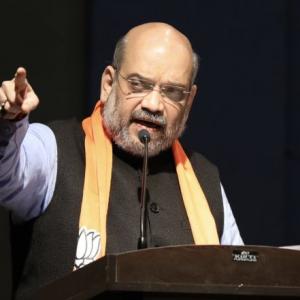