Demanding Salman Khurshid's removal from the Union cabinet, BJP leader Arun Jaitley said that he was shocked at the law minister's blatant defiance of a constitutional body. Sharat Pradhan reports

In a full-throated anti-Congress campaign in Lucknow on Sunday, Bharatiya Janata Party leader Arun Jaitley sought to use Union Law Minister Salman Khurshid's recent remarks over other issues to polarise the Hindu vote in favour of his party.

Addressing a press conference, Jaitley said, "The Union law minister's assertion that he would pursue reservation for backward Muslims even if the Election Commission hanged him was a blatant defiance of the constitutional body."

He added, "It was shocking that out of all people, the country's law minister was making such statements."

Jaitley was of the view that it was not just Khurshid but the entire Congress leadership that was out to communalise the political environment by making statements aimed at playing on religions emotions and passions.

While demanding Khurshid's removal from the Union cabinet, Jaitley remarked, "I do not know what the Congress party hopes to gain from such moves, but I am sure the party stands to lose a lot on that account."

In an indirect reference to Hindus, he hastened to add, "After all you cannot ignore the fact that the voters are drawn from different communities and not from just one community."

And in an oblique move to touch upon Hindu sentiments, Jaitley went on to ask, "whether any Congress leader shed a tear for the innocent people who were killed in the 26/11 terrorist attack in Mumbai or when Afzal Guru masterminded the attack on Indian Parliament?" 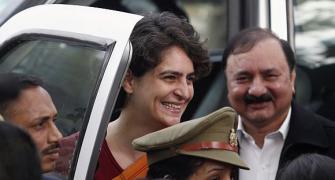 Wind in favour of Congress in UP, says Priyanka