Stepping up its attack on the government over farm laws, the Congress petitioned President Ram Nath Kovind on Thursday and demanded a joint session of Parliament to repeal the legislations, with Rahul Gandhi alleging that democracy is only 'imaginary' in the country now. 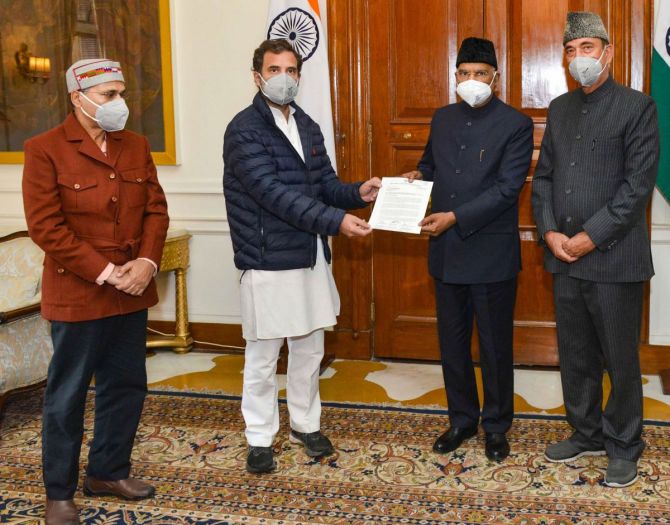 Gandhi met the president and handed over a memorandum signed by two crore farmers demanding a repeal of the laws, saying they will not benefit farmers or labourers.

Earlier, Congress leaders staged a protest outside the party headquarters New Delhi after they were prevented from marching towards the Rashtrapati Bhawan.

Congress MPs and leaders, including Priyanka Gandhi Vadra, were detained by the Delhi Police and released later, after they staged a sit-in protest outside the party office in violation of prohibitory orders.

The police had imposed section 144 of the Code of Criminal Procedure (CrPC), banning the assembly of four or more people around the Congress office.

After handing over the memorandum to the president, Rahul Gandhi, along with Ghulam Nabi Azad and Adhir Ranjan Chowdhury, said anyone standing against Prime Minister Narendra Modi, be it farmers, labourers or even Rashtriya Swayamsevak Sangh chief Mohan Bhagwat, will be dubbed as a terrorist.

If the prime minister does not repeal the contentious farm laws, the country will suffer, he added.

'India is now an imaginary democracy,' the Congress leader said in a tweet after he said he took the voice of the farmers to the president.

"The farmers would not return till these laws are taken back. The government should convene a joint session of Parliament and repeal these laws," he told reporters after meeting the president. 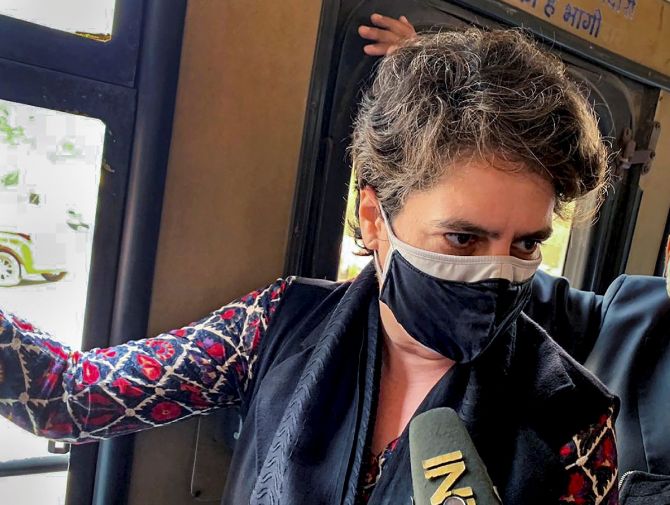 IMAGE: Congress leader Priyanka Gandhi Vadra inside a bus after being detained by police during their protest march towards Rashtrapati Bhawan to meet President Ram Nath Kovind on farmers' issue, in New Delhi, on Thursday. Photograph: PTI Photo

Gandhi said all the opposition parties are standing with the farmers, adding that the way the laws were passed without any discussions or consultations, they need to be withdrawn.

"Three of us went to the president, but took the voice of the farmers to him by taking the signatures of two crore farmers," he said, adding that "the farmers are in pain and are also dying, the prime minister will have to listen to them".

"Anyone trying to take power from Modi will be dubbed as anti-national," the former Congress chief said.

He alleged that only three-four people are running the system and said the Congress is fighting this.

"It is an assault on the idea of India. The government is stopping our MPs from moving out of our office.... There is no democracy in India, it is only in imagination, not in reality," Gandhi charged after Congress leaders were prevented from taking out the march.

Priyanka Gandhi Vadra said the government is committing a sin by name-calling the protesting farmers. 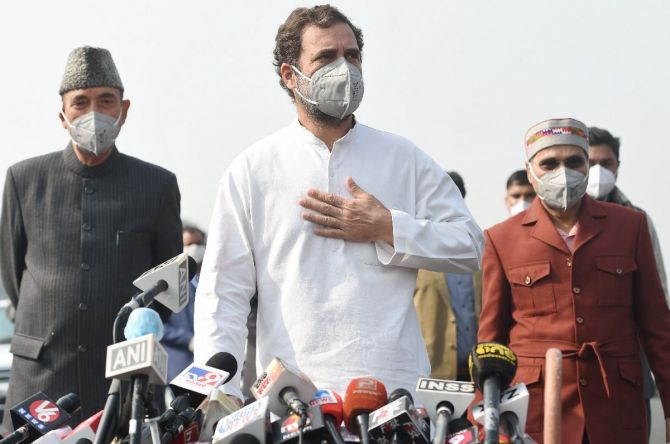 "It is a sin to brand farmers as anti-nationals. If the government is terming the farmers' protest as sedition, it is a sin.

"The government is committing a sin by calling them names.

"The government is arrogant, it is only doing politics and has no respect for farmers or jawans, who are the sons of farmers," the Congress general secretary said.

She also alleged that anyone speaking against the government is dubbed as anti-nationals.

"If you destroy the farming system...there will be massive destruction," Rahul Gandhi said, noting that his party also wants reforms in the agriculture sector but not by destroying the prevalent system. 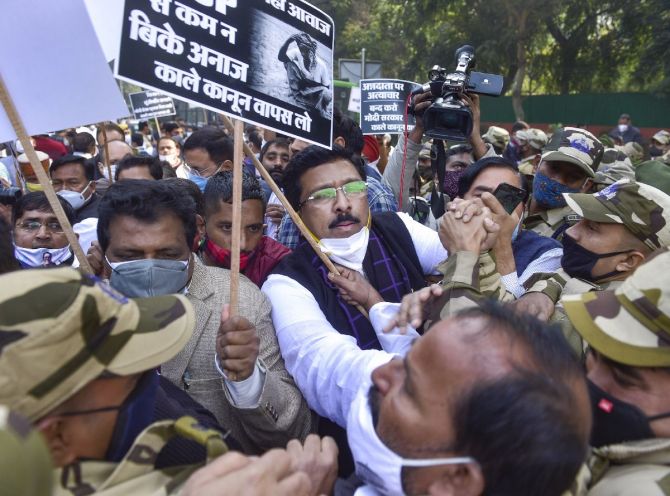 "PM Modi's only aim is to benefit three-four crony capitalists and anyone standing in his way will be dubbed as an anti-national, a terrorist or a criminal.

"He (Modi) will make sure that the wealth of the poor people is transferred to crony capitalists. He will call people anti-nationals, terrorists.

"He will construct whatever narrative he wants to make sure that the wealth transfer takes place.

"He will do whatever he has to do to transfer the wealth of these people, the backbone of the country, to those three-four people," the former Congress chief alleged. 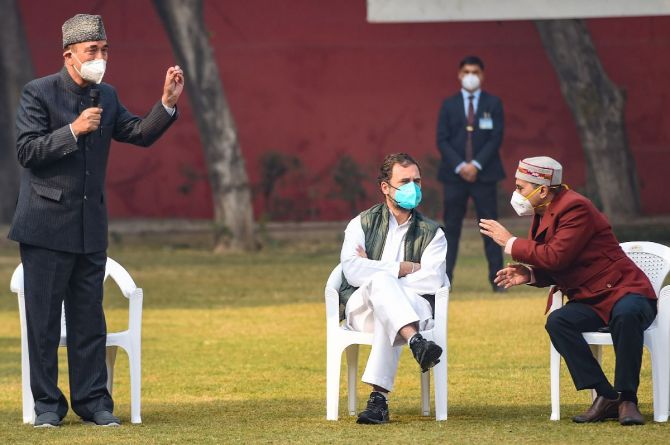 IMAGE: Rahul, Azad and Chowdhury during a meeting at AICC HQ before leaving for Rashtrapati Bhawan, in New Delhi, on Thursday. Photograph: Vijay Verma/PTI Photo

Claiming that the country is 'moving on a dangerous path' and 'it will suffer', he further asked, "China is sitting at the border and has snatched our land, but why does the prime minister not speak up on it?"

Congress leader K C Venugopal, in a statement, said the government acted in a 'most undemocratic, unfortunate, high-handed and brazen manner' under the instruction of Home Minister Amit Shah and Prime Minister Modi, and detained senior leaders of the party. 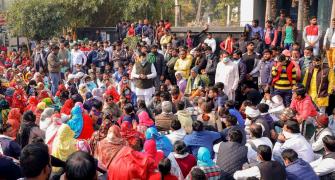 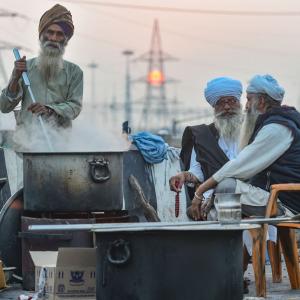 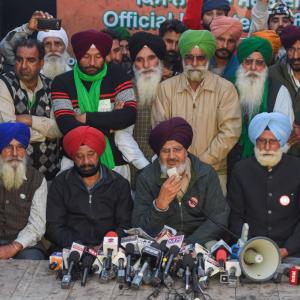